Interview: Asher Treleaven Is Bringing Magic To The London Wonderground 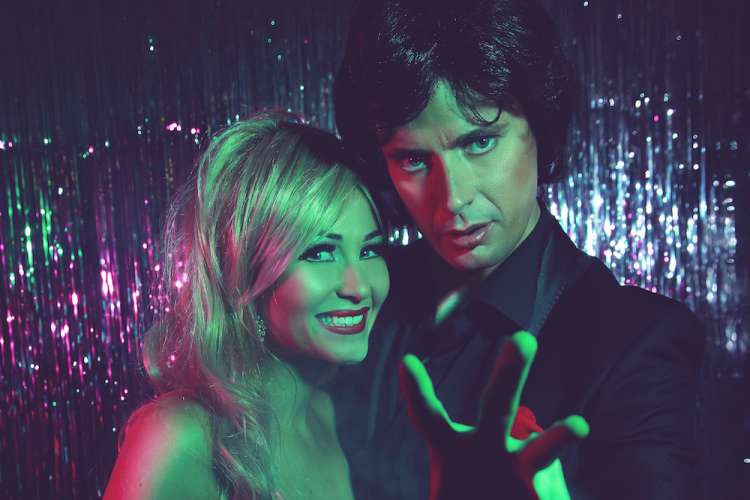 Can real-life performing couple Peter & Bambi Heaven keep the magic happening both on and off stage? That’s the question at the heart of their new show The Magic Inside which makes its UK debut this summer at the London Wonderground. This is what it looks like.

Playing these conjurers from Down Under are two faces that have already seen action on the South Bank. Comedian Asher Treleaven appeared there last year as La Soirée’s  “sexual gentleman” while burlesquer Gypsy Wood was a highlight of EastEnd Cabaret’s Club Perverts. As they prepare for their London run, we spoke to Asher about this latest venture.

The last time we remember seeing you two together was in 2011 with your Comic Strip show. What’s the impetus behind this new joint show?

We decided to try and make a new show together for the 2015 Perth Fringe, we didn’t know what form it would take but we were both ready for something new. We’d put Comic Strip to bed, I was feeling pretty disenchanted with the stand up comedy scene and Gypsy wanted to break out of burlesque. So when she came to me with the suggestion making some new work, I was cautious but she won me over eventually.

What’s behind names you’ve chosen for your characters? Do they have any special significance?

The names of the characters and show are taken at random.  There’s no connection with an actual Peter and Bambi. Having said that, some of the characterisation is taken from people I met on the cruise ship circuit.

You’ve described yourself as a “circus school dropout”. What happened there and how did you transition into stand-up comedy?

I was kicked out of High School drama in year eight so I’ve always seen myself as a bit rebellious, although I’m sure my circus school instructors would’ve thought me a massive pain in the ass.

I graduated from NICA (National Institute of Circus Arts) in 2001 and naively thought Cirque Du Soleil would be waiting to snap me up. My career as a circus performer failed to flourish so I moved onto street performing to make an income.

I was introduced to stand up while living in London back in 2004 and found a home in the weird world of Robin Ince’s Book club, where I flourished.

“We have a very complex relationship.”

The cabaret circuit has more than a few stories of couples who worked together on stage and, for various reasons, are no longer together. Some, like the Skating Willers, performed as a duo even after they divorced. How much has working together changed the dynamic of your relationship?

It’s a hard question to answer, because we have a very complex relationship.

I don’t think performing together changed our relationship a lot, but it certainly put pressure on it. I’m really looking forward to working with Gypsy for the foreseeable future, she’s a fantastic performer who’s just starting to stretch her comedic muscles and I think we’re going to do great things together.

Our breakup was very amicable, we just came to the end of our romance but we’re still family and we love each other a lot.

Many still remember your stint with La Soirée, especially your roof-raising cry of “Slaaaaaaade!” What are your most enduring memories from working on that show?

There are so many prize memories from that show, being part of the cast that won the 2015 Olivier Award, performing on the Southbank and getting regular standing ovations continually amazes me.

La Soirée is the first company I’ve worked for and ironically the two acts I do in the show I premiered back in 2001 when La Soirée was a club night in the Famous Spiegel Tent called Club Swizzle. I’ve always been part of that big queer carny family and its so great to be a regular cast member at the moment.

“I always think my best show is ahead of me.”

What’s your take on critics? Some artists tend to regard them as parasites on real creativity and ask what gives them the right to pronounce on their show; others say that the critic’s job is to step in to protect the audience from the marketing machines and help level the playing field for artists. Do either of those views ring true?

Performers whine when they get bad press. Sometimes they’re justified and sometimes they’re not. It’s no surprise to anyone on the Festival circuit when Bruce the local fishing correspondent shows up at your show and gives you a shitty review. However, if Bruce loves your show it doesn’t matter if he’s a pro or not: you’ve got four plus stars to splash on posters and that’s a win.

I’m not trying to demean the role, artists need critics and vice versa. I think the role is important and should be approached with respect and diligence but when there’s anywhere up to 3,000 shows a night at the Edinburgh Fringe, sometimes it’s a role of the dice.

You written at length about your experiences at the Fringe and spoke once about it being a “compulsion”. Other than the opportunity for greater fame and glory, what drags you back to the Fringe year after year? Will you be up there again this summer?

Making shows for the Fringe circuit here in Australia is one of my main sources of income and it’s also my primary source of creativity. I make a lot of new work for the Festival circuit, which is really important for my employment opportunities and my development as a performer.

I am a big believer in creating a lot of work, rather than trying to create a paragon, which is almost certainly doomed to fail. I’m an extreme optimist and I always think my best show is ahead of me.