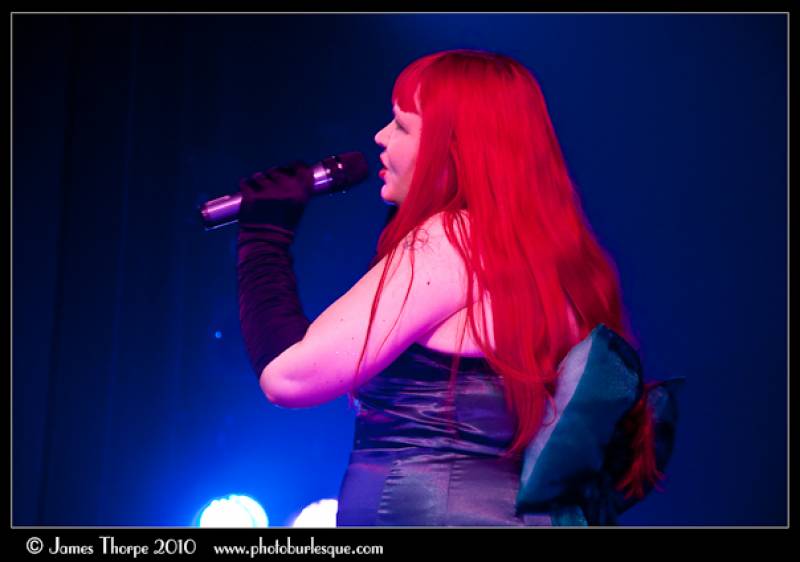 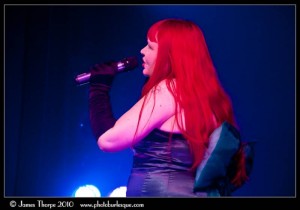 Birmingham based burlesque performer, singer and compère Angel LaVey recently announced that she would be seeking election to the Equity Council next month.

Her bid comes at at an interesting time for the burlesque industry. Recent forum discussions have asked whether burlesquers should pressure for better pay and conditions by organising within Equity or as a separate splinter group.

With this in mind, we wanted to know more about who Ms Lavey was and how she would be helping the burlesque community.
Introduce yourself in one sentence. What would someone not guess about you from having met you?

I am Angel LaVey, burlesque performer and singer. If we met now you would never guess that I used to hate my body and always covered up in big loose fitting clothes even when I was a size 6 in my 20s after having two children.

What led you to seek election to Equity? Have you been politically active before?

I decided to seek election to the Equity council as I realised that whilst there are many burlesque performers who are members their voice is not really heard. I have never been politically active in the past; although I would happily engage in political debate with my peers, politics always felt as though it was something other people did.

This changed last year as I realised that Equity had standard contracts for all their members – except burlesque performers. This struck me as unfair as we pay the same sub rate as any other member who earns what we do from performing. So I decided to do something about it at the Annual conference. I spoke to a few people and they were wonderful. They put me in touch with the right people to get the matter made official. A few emails and some meetings later and presto: official Equity contracts for burlesque which come with full legal protection.

Give us a taster of your manifesto – what are you seeking to improve or introduce?

I really want to raise awareness of what burlesque actually is. So many members have told me that they have no idea what I do as a performer. Why? We all know roughly what a stage hand does for example, why is burlesque any different? This would also help to remove the stigma that people sometimes associate with burlesque, namely the idea that it is seedy and that the audience is made up of men in Macintosh coats, which of course could not be further from the truth. The truth is that the average burlesque audience is couples and women, because it’s not sleazy. It’s funny and sexy and sometimes it challenges your world view through political satire but mainly it’s just good fun.

Do you think that burlesque artistes get treated seriously within Equity?

I think that all depends on the branches themselves. Every fellow member I have met has been lovely but most of them have no idea what burlesque is. Which begs the question: can you take an art form seriously if you know nothing about it? Similarly, would you get involved and fight for a cause you know nothing about? Equity was an amazing help in getting the S.E.E.L. act amended and I am very grateful to every single person who got involved but I do wonder if we could have achieved more if everyone understood why we did not want burlesque being labelled the same as lapdancing clubs in the first place.

How does Equity membership benefit cabaret performers? How has it done so recently?

Equity membership is brilliant and full of benefits for performers everywhere as it is a worldwide union. Firstly you get public liability insurance free of charge. You get accident insurance as well so if you get hurt while performing you can claim your loss of earnings. The legal protection alone is worth the price of membership. If a promoter decides they don’t have to pay you for your performance you can actually do something about it, Tim Johnson works tirelessly to get performers the fees they are owed and recoups thousands for Equity members on a regular basis.

A recent example of Equity helping cabaret performers comes in the form of the low pay/no pay campaign. Which in a nutshell is saying give performers a fair wage for their services – no more “hey, it’s good exposure so even though everyone else involved is getting paid you’ll perform for free right?” Or you are expected to perform for such a pittance it would not even buy you a drink in the venue. I know as well as anyone else that everything runs on a budget but for some reason people think it’s okay to offer nothing at all or a fee of £10 for a twenty minute performance. I run shows and I pay everyone – even the stage kittens which, makes my show different from most others.

What’s your take on the current state of burlesque?

I think burlesque is doing just fine. Sure people complain about amateurs being everywhere but that just proves that more people are discovering this amazing art form, and we all start somewhere. Every professional burlesque performer was an amateur at some time. Yes, some of them are terrible, yes, some of them are in it just to make a quick buck, but some of them are very talented and will be big names on the circuit before too long. People look down on amateurs sometimes and act like it’s a bad thing. If there were no new performers, the scene would stagnate fast. Every show would have the same performers over and over again and the audience would stop coming – fact. There’s no way I would go to a show tonight in London if I could see the exact same show tomorrow night in my home town of Birmingham.

The other issue that has been debated for as long as I can remember is the issue of teaching burlesque or running workshops. Some people insist you should only go to a qualified teacher to learn, which sounds great until you realise there is no recognised accreditation for teaching burlesque.

Now if you are teaching dance there are any number of qualifications you can get in order to teach people safely and correctly, but heres the rub: burlesque is not about dancing. You can teach burlesque based purely on theory and the history of the art form like a lecture. Would you still need a dancing qualification for that? Who decides what constitutes qualified? A company who currently teaches workshops so that they can protect their trade? The burlesque performers as a group? The second option would not work as the burlesque performers as a whole are split on this issue and the first option is ridiculous because the company in question would just declare itself the only accredited place to learn.

The other side of this argument is performers and attendees of workshops, some who now teach themselves. They state that as long as you have been performing for five years then you are qualified to teach, so in theory something magical happens after five years which means instead of being unfit to teach you are now fully qualified.

I think both sides have merit but also flaws. It would be easy to create the accreditation the scene needs, but equally easy to ignore it and declare it a nonsense. Legally, you need no special skills to run a workshop. I could run one tomorrow as long as I did not put anyone at risk of harm and as long as I have insurance – which I do, through Equity. It might upset some people but legally I would be doing nothing wrong, and honestly, do I really need a dance teacher qualification to run a hen party demonstration? Of course not, that would be pointless.

I do run workshops and hen party demonstrations, there is no dancing involved. I teach a bit of movement, for example the difference between how to walk on stage vs off stage. I do full warm-up stretches before showing anyone anything and I insist on cool-down stretches before closing the class. I have full knowledge of safe stretches for all fitness levels thanks to years of dance training, the study of martial arts and a personal trainer. I have a qualification in teaching performance and directing performance and I have definitely been performing for more than five years; but of course there are people who think I should not be teaching as they do not view me as qualified. All I know is everyone who comes to my classes tells me they had a blast and they leave with a big smile on their face – and that’s good enough for me.

You can find out more about Angel LaVey on her official website.