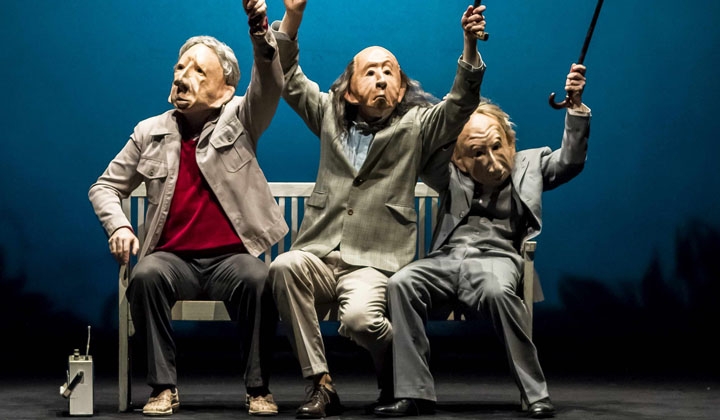 If you’re reading this, you’re alive. You may barely notice that your heart is beating or your lungs are expanding and contracting but you’re alive. What’s more, you’re going to be alive for the rest of your days and every one of those days has the potential for a new start or a new adventure.

If you’re reading this, you’re dying. Your next heartbeat and your next breath will be one less in the finite total you’ll experience between this moment and your death. Whether the people in your life shuffle off this mortal coil before or after you is moot – sooner or later, you will lose everyone and everything around you.

Familie Floz’s Infinita (appearing at Peacock Theatre as part of the London International Mime Festival) is a thought-provoking and existential exposition of the above two statements. In alternate scenes, four masked performers wordlessly play either very young children exploring the world or elderly men and their carer trapped in an old people’s home.

The similarities between the infantile and the infirm are shown at many levels. The imperfect and changing physicality of both is keenly observed as are their occasional petty and spiteful actions. The reluctance of a child to start school and leave his mother is paired with a scene in which an oldster fights against his relegation to a retirement home. There’s slapstick and jaunty tunes aplenty and the giant props are wonderful ways of presenting the world from the perspective of the tiny people we once all were.

The focus, though, is on the older folk. The opening scene is a funeral – an angel in white plays the cello while her husband plays on the piano. This way of compensating and connecting to something irrevocably lost is a central theme here: whether it is through hugs, drugs or music, the elderly all seek to break beyond the physical constraints of their penultimate abode to something that once was. There’s much here similar to classic tearjerker Up, not least the unvarnished and bleak portrayal of loss and ageing.

Heartbeat by heartbeat, breath by breath, we are all growing into the grave. One day you will be pushing up daisies but, as Infinita points out, before then there is a life to be lived and only one person who can do that. Good luck.

Familie Floz’s Infinita appeared at the Peacock Theatre between 28-30 January as part of the London International Mime Festival.