“Here Is What The Government Can Do To Keep Circus Alive” 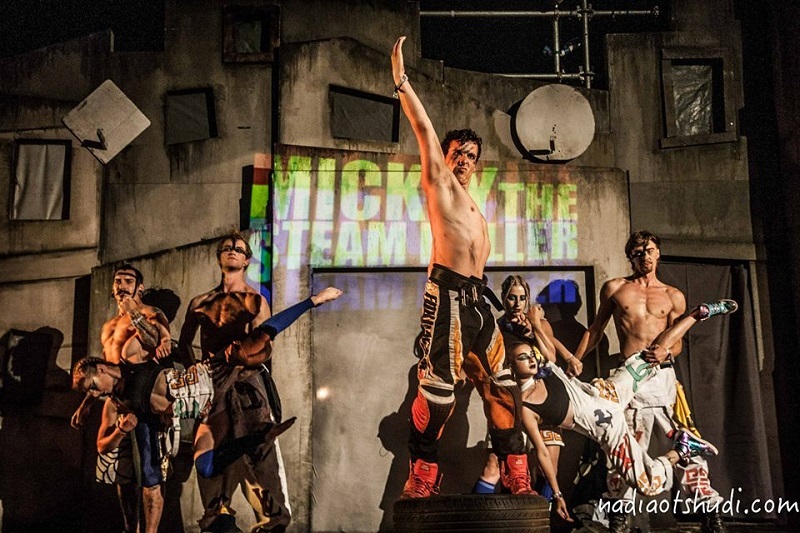 Taking place next month from 10-13 August, Boomtown Festival has established itself as one of the UK’s most creative events of its type. While their competitors scramble for headline acts from the charts, Boomtown is all about creating a unique experience which encourages everyone to explore the specially created environment split into different districts like Trenchtown, Wild West or Whistlers Green.

Bassline Circus have been part of Boomtown for some time and their thrilling shows are a must-see for anyone at the festival. Each year, they bring to life a new concept and in 2017 they will taking over an entire district. Before they set up camp in Barrio Loco, we spoke to the company Natalia Colville. Originally a stilts and tissu performer, the Bristol-based producer has over a decade of experience as a circus/event producer and has run urban circus projects from inner city London to the slums of Nairobi, Kenya.

We’re glad to see Bassline are coming back to Boomtown again. How would you persuade those who have never been to go there?

This year at Boomtown, we’re taking on a new and exciting challenge. Last year, we had the outdoor Boomtown Games show but for 2017 we are working with the festival to animate and populate the entire district of downtown Barrio Loco.

This year’s vision is for the whole festival to come alive between 6pm – 12am every night. With Boomtown having spent years building jaw-dropping sets, we feel the most effective way to achieve this is to animate the façades with performers, so that it really feels like a world exists beyond them.

We want to raise the public’s eye up and hit them from all angles so there is always something to look at and wonder.

So, Bassline is busy planning and producing Barrio Locos’s vibrant community playground where the local youth trick and flip their way around the balconies and upper levels of the district all day long and through the night.

With a cast of over 50 characters creating a real local community, they congregate and hang about, swapping tricks and skills, running up walls, climbing buildings and dancing to the beats of the Barrio. After six years of being Barrio Loco’s resident circus, our performers really own this hood!

There is much more that the government and councils can do to keep circus alive.

You’ve been helped by bodies like the Arts Council but UK funding for circus pales in comparison to that given to students and companies in, say, Canada and Australia. How would you persuade the government to put more money into circus.

Funding is really important of course, but there is much more that the government and councils can do to keep circus alive, like reducing the crippling ground fees it costs to put up a big top in many places, especially Bristol. If there were more towns with a dedicated circus ground with inbuilt infrastructure such as basic rigging, power, fencing and toilets, more touring circus companies would be able to visit.

Circus wants to tour and use its trademarks big tops to attract a wide demographic of audience but we are hindered by our overheads being so high, which a little more support from the government could make so much difference. Traditional circus as well as contemporary circus want to work together to keep circus alive in the UK. Hopefully Circus 250 next year will help bring to light ways in which the government can help.

We believe circus should be part of the curriculum in schools and incorporated even more into education. Circus can provide ways for young people to gain confidence, build up strength, stamina, learn about failing and succeeding, teach determination and so much more. Gaining this type of self confidence and self-esteem can filter through into all aspects of life.

Next year is a big year for circus as its the 250 years since the birth of Modern Circus started by Philip Astley, watch out for month long events in different cities across the UK during.

It was once criminal to play dance music in public.

Not many other circus troupes have dance as a core element of their productions. Why do you put such an emphasis on it?

In most of its electronic forms, dance music has been co-opted by the mainstream for so long that it’s difficult for most people to imagine that it was once criminal to even play it in public.

Bassline was formed by veteran sound systems from the European free party scene who joined forces with young circus performers who understood the link between traditional outcast travelling art forms and its modern incarnations. Though many from our original crew have moved on to other high profile UK festival projects, Bassline Circus always tries to keep that conscious vibe that links bass music and a spirit of resistance; and this goes far beyond music too!

Our fearless and DIY approach to visual arts that seamlessly includes lush video-mapped sets, creative rigging and full-on venue management is made possible by a crew with deep understanding of The Collective principle that the Criminal Justice Bill was trying to suppress.

And with such a loving and dedicated crew around us, we’re lucky now to attract young artists who want to connect with that core experience and help us keep it real with their own contributions.

How do you come up with concepts for shows there like 2015’s Athletes Of The Night and 2016’s Boomtown Games come from?

Directed by Bex Anson, these shows took the hip hop battle as an inspiration for a new breed of Bassline show with hyped up performers going head to head under the hospices of a bombastic MC/referee and a scratch DJ. These included battles in single disciplines such as rope, hoop and Cyr wheel, upended by frantic Krump dance battles and spinning speed world records (floor and aerial).

Athletes’ 2015 was a real hit with audiences and performers alike, and really chimed with the festival’s narrative, so we were asked to take our show out of the tent and into the central Plaza for 2016’s “Chapter 8: The revolution starts now”

We took aesthetical and thematic inspiration from social documentary Flying Cut Sleeves about 1970s gangs from the South Bronx, who formed a truce and gave birth to block parties hosted by the godfathers of hip hop (and inspiration for the 1979 film The Warriors and HBO’s The Get-Down)

In our version, Comrade Jose Burrito took to the rooftops and presented The Boomtown Games: three gangs ziplined into Barrio Loco’s central Plaza and battled to win a rooftop villa in a gladiator-cum-breakdance competition. Cue a popular uprising led by gang leader Eva Lazarus and the Afronauts! Storming the stage, Eva stole the mic and annihilated the regime’s MC to become the new ruler of the Barrio.

Education has historically been an important part of your company mission. Why’s that?

Bassline Circus was born from the ashes of the European and British festival, free party and circus scenes, and despite many changes over the years, still believes in, and functions around a central ethos of Create-Innovate-Educate-Activate.

We have a vision to help people see differently, think outside the box, challenge themselves and create their own realities. We as Bassline Circus believe that our purpose has been to provide opportunities and a platform for people of all backgrounds – especially those with less access to artistic activities – to take part in creative projects with circus, music and visual arts as their vehicle.

We are regularly proposing circus workshops in inner-city locations from east London to Nairobi. We recently offered a free workshop in Bristol and are planning for more.

Finally, what can we see you Bassline after Boomtown?

We are in the throes of producing an exciting new project for next year. Headed by Bex and Dav (Bassline’s video designer), we are working on a new small-scaled touring concert-circus project codenamed FLIP.

Featuring Eva Lazarus live with tracks by Mungo’s Hifi, FLIP tells an impossible love-chase story between an entrancing acrobat and one of the coolest street dancers on the scene. We’re about to start the production with residencies and support from Jackson’s Lane, Stratford Circus, No Fit State and Circus Cirkor.

The premiere is planned for Spring 2018. We have some other productions in the pipeline for Circus 250.

The latest information on what Bassline Circus is up to can be found on their website and their Facebook page.

More information on Boomtown can be found on their website.