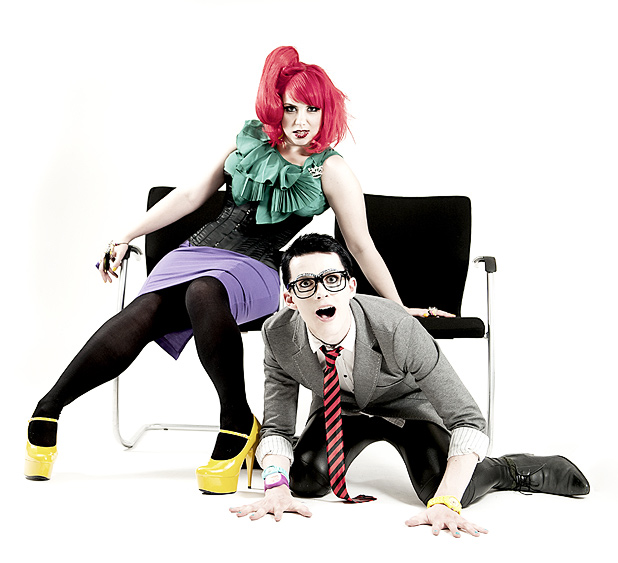 Frisky and Mannish’s School of Pop is still a five star masterclass.  Just don’t try and explain it to anyone. 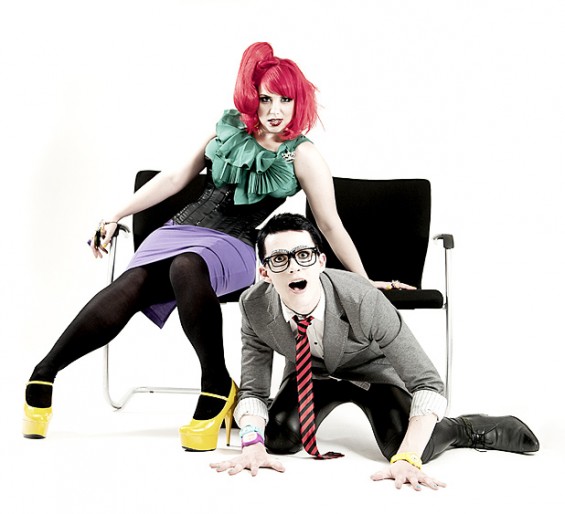 School of Pop might be an old show, but this revival at the South Bank’s London Wonderground, is still as fresh and mercurial as it was in 2009.  The first in a trilogy of events to celebrate Frisky and Mannish’s fifth birthday in cabaret, School of Pop is what happens when two mavericks take parody and mash up and turn it into a hilarious collision of musical styles.

The format of the show is a school assembly that feels more like a party.  Presided over by a stern and sardonic Frisky (Laura Corcoran), and accompanied on the keyboards by her Puckish sidekick Mannish (Matthew Jones), the pair create a school curriculum from the past three decades of pop songs.

With Chesney Hawkes’ intellectually thin, one hit wonder The One and Only becoming a study in existentialism and TLC’s No Scrubs, held up as an example of Tudor foreign policy, School of Pop is an education in nostalgic reinvention.  It reworks songs you haven’t heard since the school disco and marries them off to the most incongruous partner it can find.  In the mixed up world of Frisky and Mannish, Kate Bush sounds like Kate Nash, Girls Aloud sing Wheels on the Bus (to the Sound of the Underground) and Lily Allen and Noel Coward recount tales of a marvellous party.

Frisky and Mannish modestly claim to “tit around with pop songs” but this doesn’t do justice to their musical and vocal talent. Corcoran, in particular, is an accomplished singer with an impressive range.  When she sings the opening bars of Eternal Flame you are drawn into a moment of faux seriousness, even though you know it’s just a prelude to something silly and twisted.  She then launches into a “psycho section” where she puts a new slant on the lyrics to some well-worn love songs.  If you didn’t notice “I watch you when you are sleeping, you belong with me” was creepy before, you will now.

The Nineties grunge medley delves into the works of Alanis Morissette, exploring just how nonsensical her lyrics really are. In a nod towards the infamous “Just Say No” campaign, Frisky and Mannish quickly switch to being convincingly stoned, suggesting that Alanis Morissette’s Isn’t it Ironic might have been penned whilst under the influence of recreational herbs.  The Joan Osborne song One of Us also takes a lampooning. Was God just a stranger on the bus, or had lyricist Eric Bazilian of The Hooters just smoked a big reefer?

There is an element of audience participation in the show, but the sense of fun here is so infectious, even shyer types shouldn’t mind.  You may be asked to throw your hands up Beyoncé-style or be selected at random to represent one of the All Saints on stage, but no volunteer is forced to sing solo.  They may, however, have to speak the opening lines of Never Ever with as much conviction as they can muster.

Corcoran and Jones work seamlessly together, both vocally and in comedic terms.  Their alertness to each other on stage and their talent for mimicry makes School of Pop joyful to watch, even if its madcap premise is a little difficult to explain to the uninitiated.

If, as according to The Herald, this “undisputed hit of the Edinburgh Fringe” gained thirteen five-star reviews in 2009, make this number fourteen.