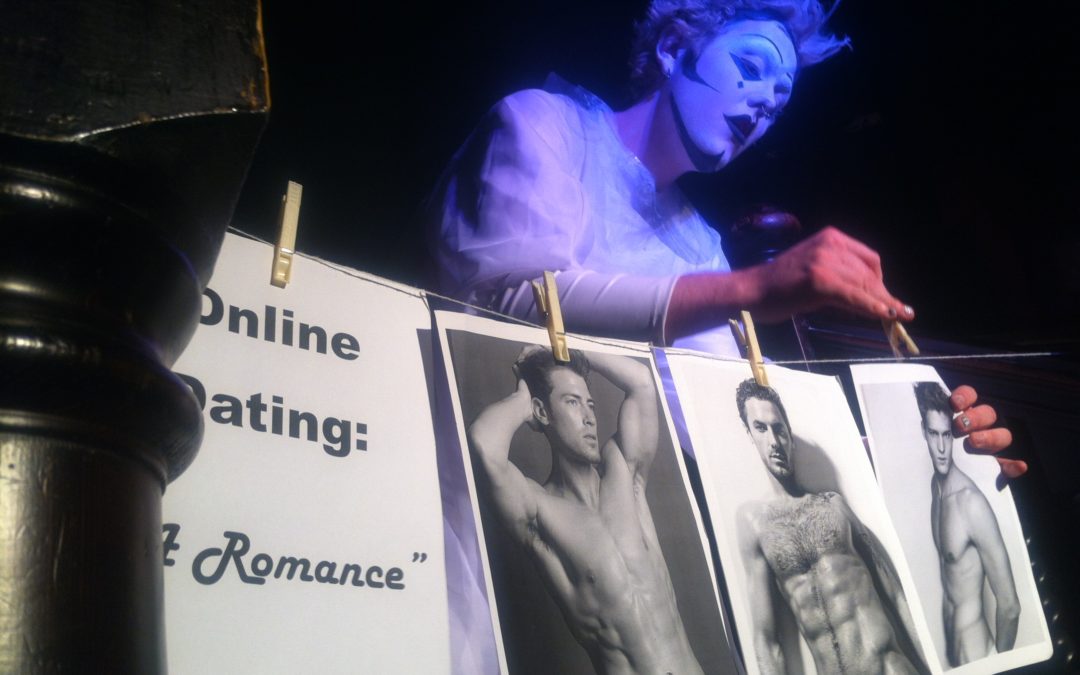 So I did the festival thing. Met a guy, got chatting, found out he was in a show. I had a free spot in my schedule, and it looked interesting, so I thought I’d give it a go. This was one of those hit or miss moments… 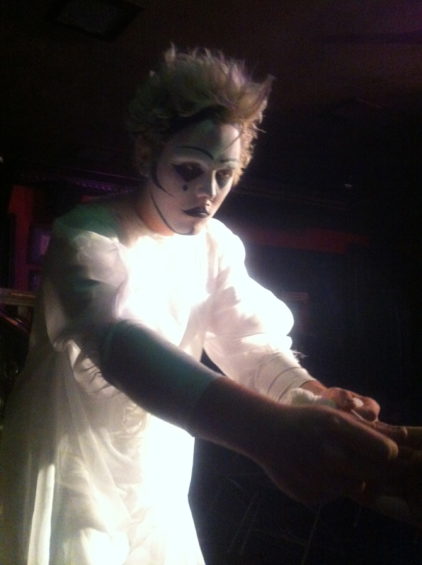 Thankfully, I landed on a hit.  The most surprising, powerful hit, from young Oberon White, whose solo show I, Pierrot is an exquisitely crafted descent into the strange.

In the crypt-like setting in the basement of Free Fringe venue The Jekyll & Hyde Pub, White performs from a tiny alcove, surrounded by bannisters that form a kind of pulpit.  His clear, full-bodied tenor is pitched at the perfect volume for the intimate acoustic space, and we hear German opera, funeral dirges, and a bit of Bowie-esque original material amongst the captivating monologues and moments of visual creation.

White has a beguiling softness underneath the severe Pierrot make-up and white gauze costume, with his wide blue eyes and fluffy cherub hair.  The carefully considered slowness with which he performs is intriguing, and what could have been a turn-off opening as he enters the room with fully bandaged face, is a well-thought out risk that’s justified by what follows.

In surreal speeches that recount this creature’s gradual awakening into something darkly magical, White demonstrates an impeccable delivery, controlled and sibilant.  Everything turning to dust, cobwebs, and dead leaves, in his beautiful renderings of the grotesque and the morbid; a modern gothic lyricism.

A section where he transforms again, into a twisted version of Nigella Lawson, seems a little disconnected from the preceding material, tied in loosely by the pre-recorded speeches of putrefaction and curdling.  The lip-synch to these speeches is badly timed, and not helped by the echoing production of the recording.  A digital soundtrack runs throughout the show, providing ghostly backing singers, choral accompaniment, and unsettling electrical disturbances.

I’m also unsure about the unravelling of string that forms a web amongst the audience members.  My viewpoint is restricted, so I can’t see how or why the transition from passing-out to collecting-in takes place, but I notice it works well as a device to draw in audience members loitering at the back of the room into the closer seats.

As he lays out a series of photos and internet dating captions, White lulls us into a sense of lightness that is crushed as the personal stories of decay become resonant for the whole of humankind, and provoke an intense emotional reaction in me, even now writing about the sequence (trying to keep out any spoilers).

We are reminded that an apocalypse isn’t always dramatic; sometimes we don’t burn out, we rot away.

The ‘elevator pitch’ that interested me in the piece was somewhere along the lines of ‘one-man operatic cabaret as a cyborg clown’.  I say to heck with the publicity stuff about digital take-over and technological influence – this is a more of an organic decay, highlighted through excellent performance and technological interface.

As I leave, I’m not the only one wiping eyes and taking deep breaths, trying to process the universe anew after the intensity of White’s stunning I, Pierrot. I have never seen anything like it. I’m thrilled I ran into him and took a chance; this is the way to do the Fringe.