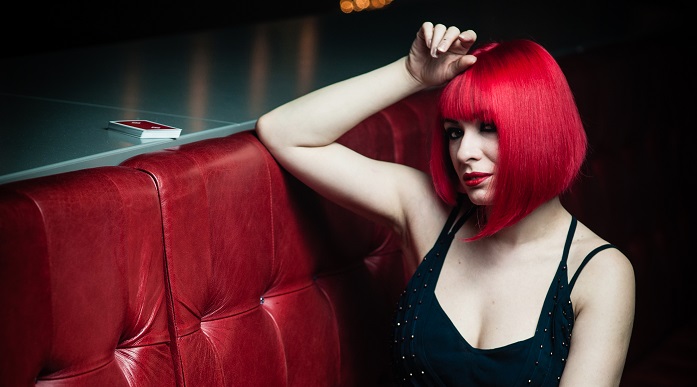 Instantly recognisable by her flame-coloured hairdo, magician Laura London has been a staple on the capital’s cabaret scene for a number of years. This August, she has taken her debut one-woman show to the Edinburgh Fringe Festival for the first time.

At the Voodoo Rooms until 28 August, Cheat explores the real-life world of card-shark, gambler and sleight-of-hand artist Geraldine Hartmann in 1919 through her diary entries. Whiskey, love and money all play a part in this tale but the real reveal is London giving the lowdown on the magic she performs. Audiences will be let into the secrets of how the hustlers of Hartmann’s day made their money from mystified marks.

We spoke to Laura about her show and why, as an industry, magic has so few high profile female proponents.

I’ve seen you doing close-up magic for a number of years now. Where does your fascination for this branch of magic come from?

For the last 15 years I have worked as a magician. But four years ago I took the decision to focus mainly on sleight of hand card magic.

It always fascinated me and was my favourite kind of magic to watch, practice and perform. There’s something aesthetically pleasing about a deck of playing cards; I love that something so small can create such wonder.

Me and you both, though I suspect we may be talking about different things. What was the impetus behind the new show? Did it stem from a Eureka moment or is it something that has coalesced over time?

I first had the idea to write Cheat three years ago when I discovered my family had a bit of a dark side. In the 1920s, my family were publicans from Birmingham into illegal gaming, horses as well as card games. Through this, I discovered some very interesting people. The show is inspired by one of those discoveries.

You’re well known for your flaming red hairdo. What inspired that look?

Strangely, my image is a toned down version of my former self. As a teenager I was a bit of a punk, always having crazy hairdos and a rather odd fashion sense. I wanted to be taken seriously so I changed my style a little, but kept the red hair so that I still felt like myself.

“Magic wasn’t considered a woman’s job for a long time.”

Magic is one of the few entertainment genres which still lacks a strong female presence at the top. Why do you think that is? Is it institutional or down to the available talent?

We have had some incredibly talented female magicians through the years. Like Mercedes Talma who was very well known in the early 1900s and was dubbed ‘The Queen of Coins’ for her sleight of hand skill and her ability to produce coins from thin air.  It is true though that none have really hit the big time in more recent generations.

I wouldn’t say it’s a lack of talent though. I would say it has more to do with the fact that magic wasn’t considered a woman’s job for a long time, but now that’s changing as more and more young girls are considering magic as a real career.

Magic is increasingly a team sport (Impossible, The Illusionists, Killer Magic, Now You See Me etc). Do you think the era of headline name magicians like David Copperfield, Paul Daniels and David Blaine has come to an end or is it a cyclical thing?

I think magic is as strong as it ever was. It’s true that these shows aren’t creating or focusing on one talent but I believe there will always be someone that shines through on their own. Dynamo and Troy are very well known here in the UK but they certainly won’t be the last we discover.

“I think magic needs to be shaken up a little.”

Every genre goes through a phase of being seen as niche then going mainstream before retreating to niche status again (for example, see drag before and after RuPaul’s Drag Race took off). Where do you think magic is now?

I think magic needs to be shaken up a little. There’s too many shows with wonderful backdrops and flashy props but have little continuity or substance.

I would love to see more shows like Derren Brown’s. He uses his skill to say something and make us think. The public are as interested in how things work and the story than they are in just being fooled.

Cards must be some of the most difficult theatrical props around, being hard to see from a distance and harder to distinguish and engage with meaningfully. How do you get around this with your show?

I will be telling a story about a female card cheat from the 1920s, demonstrating the techniques she used and shared in her personal journal. I have worked hard on the presentation so that all those demonstrations can be seen clearly. Spectators will also be invited to join me on stage and watch up close and personal.

Final question: if magic hadn’t been a viable career for you, what would you have done?

Had I not been a magician, I’d most likely have ended up in prison.