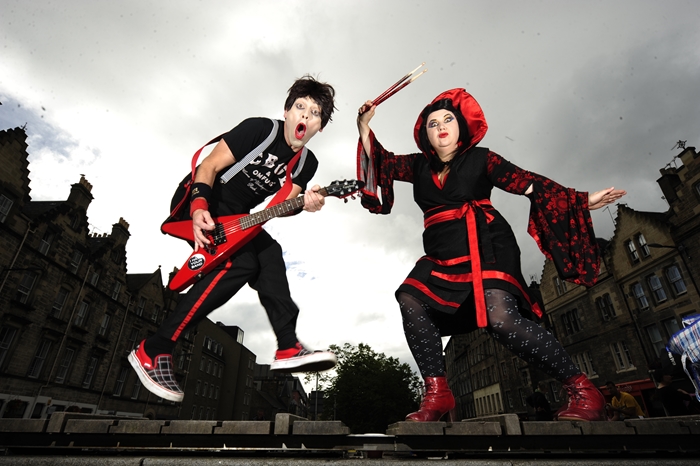 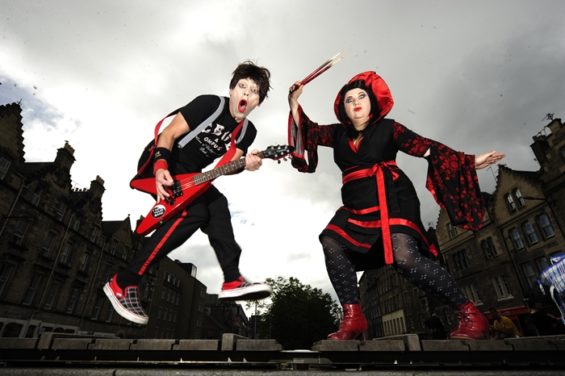 Die Roten Punkte are ripping it up at the Soho Theatre this week.

There is much mystery around musical comedy duo Die Roten Punkte. Are they really brother and sister or is there more going than that? Is all that slap subsidised by a special EU grant? And are their Berlin accents for real – then again what do real Berliners even sound like?

What is known is that they are playing tracks from their brilliant Kunst Rock album at the Soho Theatre this week. Let’s hope the venue’s speakers go up to 11 because  these two know how to rip up the night with their Flight Of The Concords-infused comic antics.

Before partying on down to Dean Street, read below for exclusive insights intoKunst Rock – there may be a test at the end of the gig and you wouldn’t want to get on the wrong side of this pair of incestuous Teutonics. Fair warning.

I thought it was important to let people know with the first song on Kunst Rock (Art Rock) that this wasn’t just a normal rock album. There are some arty surprises. This is a response to the way that people misunderstand how sensitive robots can be. Machines have feelings too, y’know. My sister Astrid, is quite angry that this song is on the album. She feels that it’s not representative of the band. But we were under some time pressure and someone had to make a decision about which songs would make it to the final cut. And Astrid was passed out on the studio floor and I couldn’t wake her.

This is a story about a dinosaur in his late teens who is flipping burgers in a big chain store. It is boring, his boss is nasty to him and he’s a vegetarian. So he hates this job. But then he has a dream to go to art college in Spain. He works hard and saves up all of his money and he does it! And when he gets to Barcelona, he falls in love with a girl dinosaur. This story didn’t actually happen in real life, but it just shows you what you can do if you believe in yourself and follow your dreams.

Astrid wrote this song about meeting new people. And it’s funny, because whenever she sings this song to someone, they usually become almost best friends immediately. They hang out all night. And then I never see them again. Astrid has lots of second best friends.

Have you ever had that experience when you put a banana at the bottom of your bag and then it gets all squashed and brown? Well, that used to happen to me. But then a couple of years ago I found this invention to protect my fruit. It’s a plastic container that fits 90% of all bananas. If you don’t have a banana, you can fit a hand-full of grapes or a couple of small plums.

Trying Not To Die

Ok. So Astrid is really angry that this song is on the album. She calls it “unauthorized” and I am banned from playing it live. It’s about safety and accident prevention. It was so wild to be left in the studio on my own and just make sounds. I was going for an early Depeche Mode feel, but with less structure.

Astrid and I don’t always agree on things. Well, pretty much everything. I have even heard that some people come to our concerts just to see us fight, but when we play our rock and roll music something magic happens. I actually think we are getting along so much better since she was in drug and alcohol rehabilitation. This punked up go-go song is a celebration of accepting our differences.

I always thought that Astrid wrote this about me, but I just asked her and she denies it.

Astrid wrote this song. It doesn’t make any sense to me at all.

This mini rock opera is the story how we came from the small village of Grunewald and moved to the city of Berlin. When I was nine years old and Astrid was twelve, our parents were eaten by a lion. An evil aunt and uncle moved into our house and made us do jobs like chop wood and cook cabbage soup. Then Astrid found out that they were trying to kill us. So one night in November 1989, we ran away. Eventually, after being lost in the forest for quite sometime, we arrived in Berlin to find everyone on the streets making a big party. I thought to myself, this is amazing. Everyone is so excited to see us. But it turns out that we showed up on the night that the wall was coming down.

This is the most arty song on the album. In fact, it’s so arty that it doesn’t even have a name.

For more information on their current gigs, check out their official website.