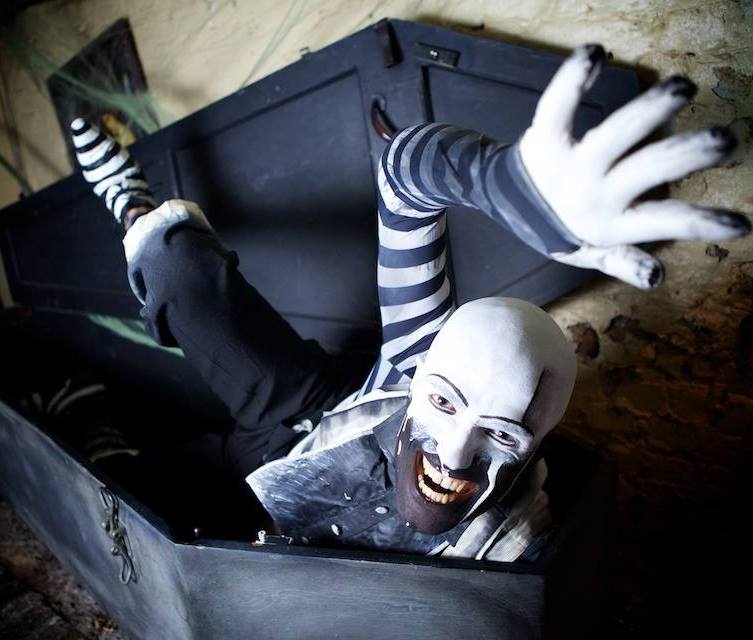 After a hiatus of two years, the mordantly morbid This is Your Funeral returns to its spiritual home of Bethnal Green Working Men’s Club with a show full of in-jokes and nods to the audience. Weird, macabre, indecent and thoroughly silly, it’s a fun night with a series of left turns that leaves you feeling “what in God’s name will happen next”?

Tonight, we gathered together to celebrate the life and “passing” of Farrukh Hyder, a man who’s photos must have graced this publication more times than almost any other and was there in person to see his own send-off. It’s a very personal choice to pay homage to someone so well known in the cabaret, alternative nightlife and fetish scenes. Hyder has become a recognisable figure, photographing all of the main figures in the London cabaret world, a selection of which he recently exhibited at Haunt in Stoke Newington.

The service is held by Tom Baker as a nervous but well-meaning vicar who plays the role with a mixture of playful winks and asides while maintaining the faux seriousness of the evening to great comic effect. This is almost a roast, but it’s very good natured, despite a story from the audience that needs to be cut short as it starts to veer too much into unseemly territory, even for this congregation who have made the effort to get dressed up in their gothy funeral best.

Acts take the form of tributes to the “deceased” and have been well programmed to cover a broad range of different abilities. Dialling the weird up to 11 is Snake Fervor who performs a pagan ritual: her face covered in a grinning animal mask, she strips from her latex dress and then covers herself in what seems to be blood. The combination of this absurd, surreal and disturbing image and her sensual and cheeky movements (at one point, she pulls off her glove in a nod to a standard cheesecake burlesque routine) makes this this one of the evening’s highlight. Snake’s is not the only blood spilled tonight: Heavy Metal Pete “murders” his musical partner Carmen Mon Oxide in their duo Riding the Valkyrie after she flirts with the crowd and shows off her some impressive operatic vocals.

There are further theatrics and comedy as the crowd are encouraged to take part in some Mourning Yoga led by Hannah Lou and the evening finishes with a smilingly confident Charlie Bouquett playing the wailing widow, downing her sorrows and then jumping on broken glass and smashed up bottles. A fitting end to Farrukh: a man who has probably seen more weirdness on various underground London stages than you’ve had hot dinners.

The success of tonight’s show is largely down to the innate feeling of community displayed all around the room It’s Your Funeral has managed to create even after it’s long absence. It also has a great format to play with. It is not a polished output, with many of the acts improvised and coming together for the night, but it has a fun sense of freedom and unexpectedness that smoothes over it’s rough edges. The show will be returning monthly at the same venue, so get your darkest finery on and go and see who is getting killed off next.

For precise details of when It’s Your Funeral will next emerge into the realm of the living, we advise following them on Facebook to find out.