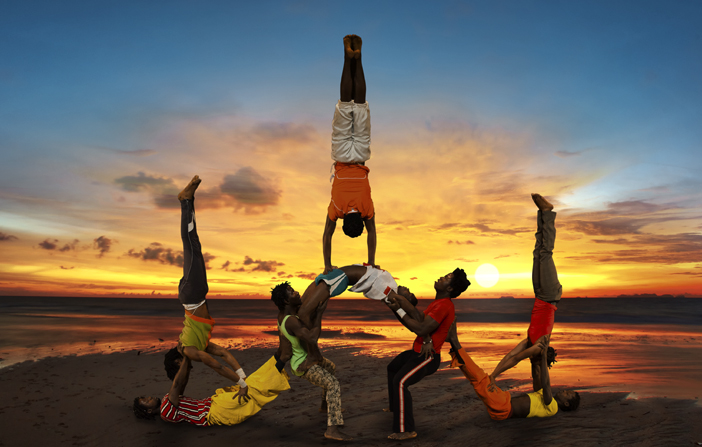 Guinean-French company Cirque Mandingue opened the 2012 CircusFest at the Roundhouse with the UK premiere of its acclaimed inaugural show Foté Foré. Translating as “black white” in the Susu language of coastal Guinea, the show is as much about cultural differences as it is about energy, of which it has no shortage.

The dancing is composed of sharp, erratic, speedier-than-light jerks of the arms and legs thrown into space, then retracted like synaptic beats. It is fast and frantic, reaching a fever pitch by the end of the production with an array of acrobatic fireworks exploding on the stage. 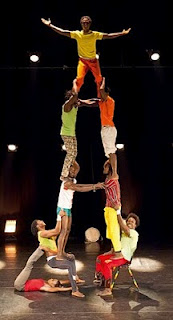 The circus skills are impressive, most particularly the flying acrobatics, which the performers throw off with catlike ease, vaulting their muscular physiques back and forth like missiles. By far the most remarkable act comes from the ridiculously talented Aboulaye Keita, who performs one of the most skilful pieces of contortion you’ll ever see, limbs twisting and stretching beyond belief. At one point his torso appears to corkscrew all the way around, like something from The Exorcist. It is a tribute to his performance skills that while the number is shocking and funny, it also remains hypnotically beautiful. The decision, therefore, to pair him later on with Régis Truchy for a double act seems a little disjointed (yes, bad pun), as it is hard to take your eyes off Keita in order to appreciate Truchy’s own punchy popping, locking and ripples.

The weakest point of Foté Foré is its storyline. An initial pantomime-like sequence sees Truchy heading off with a suitcase to visit the Guinean circus company for some skill-swapping: but after a couple of brief colourful scenes, any attempt at story or examining cultural divides is forgotten until it is time for him to leave again. Likewise, there’s not much in the way of characterisation – a shame, as it could have provided a good way of engaging the audience. Instead, acts are linked with with yet more dancing, which does at times make you feel like you’re watching the troupe do an extensive warm up.

Overall, Cirque Mandingue’s Foté Foré is a ragged and vibrant show that pulsates with relentless vitality.