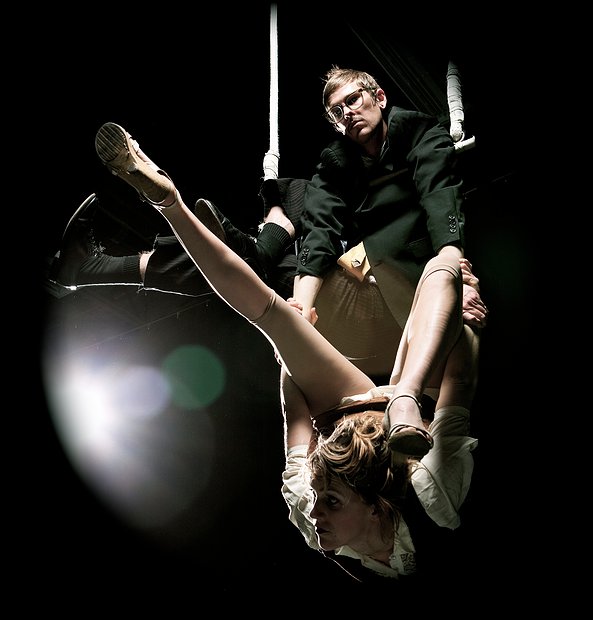 The Ricochet Project are a New Mexico-born circus of two, currently based in Berlin and composed of Cohdi Harrell and Laura Stokes. Their Total Theatre Award-winning show Smoke & Mirrors is an absolute success, clever in the apparatuses it uses, in the way it uses them and in what it says by doing so.

The show features a blend of aerial ropes, trapeze, contortion and handstand, and is an insight into the minds of two office workers, oppressed by the the absurdity and conventions of the capitalistic world they live in. When they get home at night, both undress without seeing each other (although it is unclear whether they share the same fictional space at this point). They shed their social identity, stripping down to a bare and raw minimum.

And that’s how the circus occurs too. Not as an excuse to show tricks, or to perform perfectly executed routines, but to express the inner lives of both characters in a succession of spasms and torsions where the body is twisted with perfect grace into ungraceful positions.

Harrell does a great job of looking like a pre-Breaking Bad Walter White. His handstand and dance solo is a display of strength, awkwardness, suppressed sexuality – and portrays all the many ways a man can sit on his chair. It is as if the objects of everyday life have become legitimate partners for interaction: when human connections are broken, one must dance with the inanimate. The choreography itself is exquisitely thought through to compliment and contrast the image of a man wearing only white briefs, a shirt and a tie. The effect is one of intimacy and vulnerability.

Harrell’s static trapeze routine is equally mesmerising and tells the story of a man battling against forces he doesn’t control, pulled down by gravity but also victim of his own momentum, and only able to find respite for seconds at time in uncomfortable positions. That respite is always precariously balanced and always falls again, eventually.

Stokes is perfect and awkward looking in her beige heels and brown suit and quickly strips down to match Harrell, wearing only white briefs. On the double aerial rope (an appartus interesting in itself, that makes you wonder why it isn’t used more often), she gives a distressed and syncopated performance punctuated throughout by the shaking of her fingers. The entire dance is a deep, painful inner scream. She finally drops on the floor in a contortion pose and the strobing lights take over the stage. Everything becomes slow, fragmented and nightmarish, with hints of Kafka and the horror of a world so mundane it doesn’t make sense.

The final piece is performed by both Harrell and Stokes and mirrors the opening scene. But whilst in the first scene the performers assume multiple disconnected poses on the trapeze, both wearing their office gear and shoes, the final performance is purposely less contrived, more honest. We have moved from the illusion of the convention to something truer. Bodies move together on the sling and double rope to the sounds of the famous speech from The Great Dictator. There is a glimpse of hope, a glimpse of freedom. And yet, at the end of the show, the performers put their clothes back on and life as we know it resumes; there are no escapes, only respites.

The great thing about Smoke and Mirrors is that it really makes the most of the circus techniques and takes the disciplines beyond the anecdotal. At no point does it feel like the choreography is just a pretext to execute tricks. When the performers appear to be simply ‘going through the motions’, that choice has been perfectly calculated. This is not a performer’s boredom, but a performed one, using technical tricks to express something greater, never presenting them for their own sake. This is circus breaking free from itself.