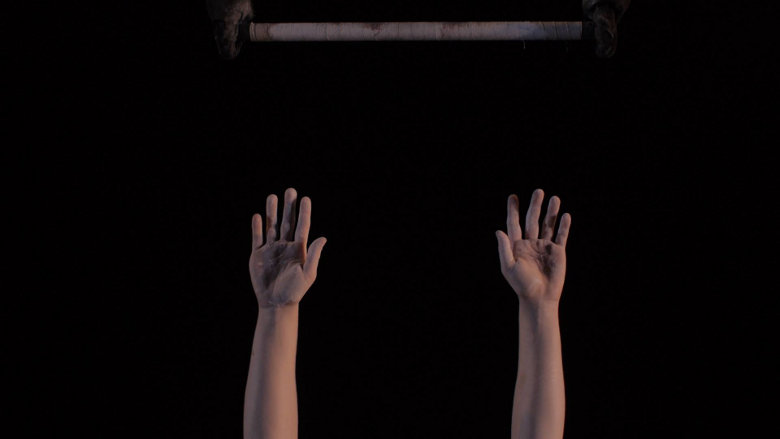 Traditionally in Big Top circus the female aerialist is an object of desire, her distance as much a part of the other-worldly allure as her skimpy sequinned costume and her spectacular tricks. She is meant to be both sexy and unattainable, and that’s what keeps the audience coming back for more. What happens when you remove that distance and strip away the mystique? Ringside, devised by Ellie DuBois and performed by Francesca Hyde, shines a revealing spotlight on the world of circus through an intimate one-to-one encounter with a female trapeze artist. The show, which lasts around 10 minutes, was shortlisted for a Total Theatre Award at last year’s Edinburgh Fringe, and is currently showing at the Roundhouse as part of CircusFest 2016, where it will appeal to all who enjoy the thrill of being immersed in another world – and who appreciate having it all to themselves.

Led by an usher to the outer shell of the auditorium, the audience member is left to make their way in the dark to a beam of white light on the floor in front of the stage. As the eyes readjust to this twilight zone of circus, they take in the vast space, the empty seats, the invisible public. Looking ahead to the stage there is a trapeze in the spotlight, and various other pieces of circus equipment lurk in the shadows, ghostly overlays of other shows. After a minute or two footsteps are heard, and a girl comes into peripheral vision from the wings. She is petite, her hair is swept into a bun, and she is wearing a signature circus leotard, which in the dusky lighting has a faded glamour about it. She stands next to the audience member, her breathing audible, and for a moment they share the same perspective, looking ahead, anticipating the performance. She takes their hand in her chalky palm, and gently leads them on.

What follows is a personal encounter in a public space, built on the intense rapport established between performer and audience through a frank and reciprocal gaze. At first being looked at so directly is unsettling, but this is a two-way exchange, less a challenging game of blink, more an encouraging invitation to trust. By the time the performer takes to the trapeze – with deftly executed, studied manoeuvres – the engagement is such that the audience feels an integral part of the performance. At such close range, the contraction and release of muscles is visible, as are the welts, sweat and bruises that bear witness to the terrific energy going into every suspension of movement and release into a swing.

Far from being some remote celestial being, Ringside reveals the female trapeze artist to be a living, breathing, vital woman, and the empowering celebration of that reality creates its own magic. The charge of the connection, that feels so genuine, both lasts forever and is gone in a flash. Ringside is that potent blend of being both deeply satisfying and hauntingly elusive. It will have you turning it over in your mind afterwards, and it will have you coming back for more.