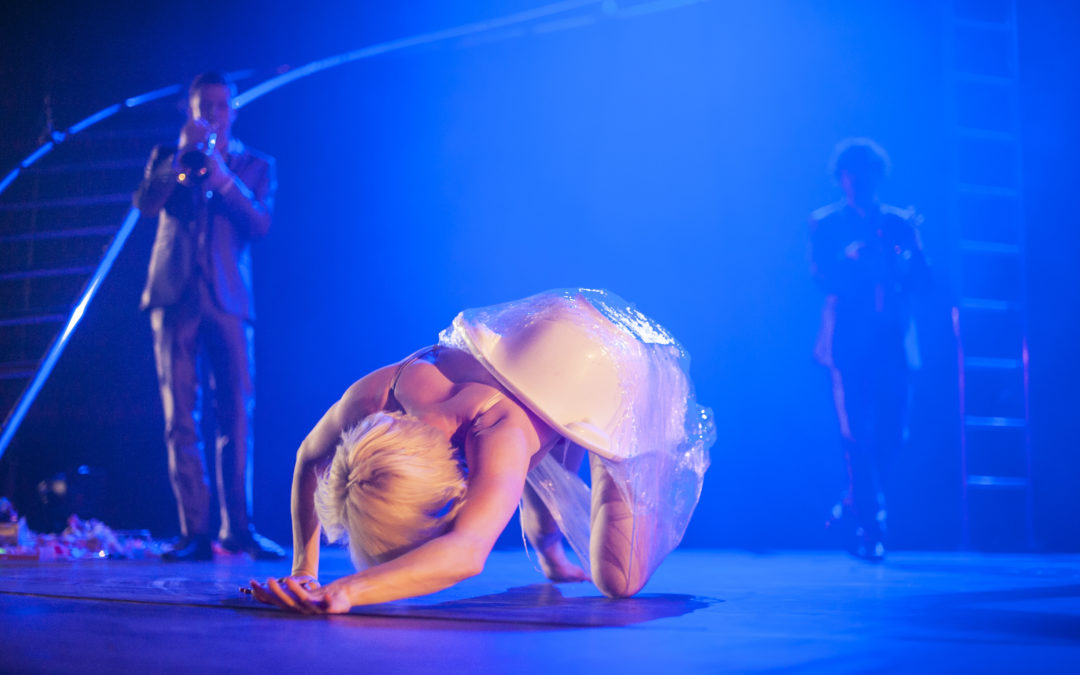 Appearing at the Roundhouse as part of Circusfest 2014, Puffball is a complicated show to critique, as it was developed partly as a social circus project, and partly as a professional production. There is an apparent theatrical naivety to much of the direction, giving a juvenile feel to the material, yet the young performers are sharing genuine emotions and heartfelt concepts that rise, at moments, above the clichés. 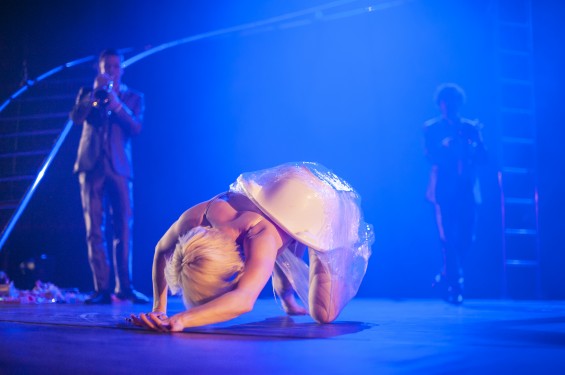 There are beautiful – and grotesque – visual images here, set to Jules Maxwell’s original score of delicate lounge jazz and sumptuous folk harmonies, which evoke the struggles of finding love and your own identity.  Developed over a year, through workshops with young people across the UK who identify themselves as LGBTQ, artist Mark Storer has combined snippets of real life stories and experiences with elements of circus performance and visual artistry.  The performers onstage comprise of professional circus artists, musicians, and novices selected from initial workshops; the large-scale ensemble nature of the piece waters down some strong skilled elements from individuals of both camps.

Tanwen Watson shows versatility and emotional range as an actress as well as lithe aerialist in a touching doubles trapeze act performed from a suspended bed with Hamish Tjoeng, and in her cameo as comic giant Tim; Tjoeng also shows us a darker side in his physical performance during a tense dance of power imbalance with Diego F. Martinez from a suspended chain.

Max Beecher (MaxLastic) is a serenely balletic contortionist producing images of extreme grace most usually associated with femininity, and plays a part in an achingly familiar love triangle between Max Calas Sevé on his trampoline and Benjamin Gregor trapped beneath.  There is a flash of fire from Christopher Willoughby (Chrysalys), and some interesting play with air currents and hanging drapes of silk from Alice Ellerby on her cloud swing; but these visual tokens never garner the audible response that circus acts are known for.

Most illustrative of the inner turmoil that bleeds through the fabric of Puffball is Paul Evans‘ expressive static trapeze routine, with its gasp inducing changes of pace, surprising drops and – ouch – 10 backward elbow rotations.  This pain is real.

There is a definite feel of teenage angst to the whole show.  The emotions may be universal, but the expressions of them sometimes lack depth and subtlety. Texts are raw and unpolished, so when Jolene O’Sullivan‘s triumphant pride and passion shine through in ownership of a hard-won individuality, I am reminded of reality TV stories and left cold.

With highly personal work editing is always a challenge, and this smorgasbord of activity fails to allow the fleeting moments of absurd humour or tender connection to develop into their full potential. Traditionally circus is characterised by vibrant changes in dynamic, which Puffball avoids, maintaining a sedate pace throughout.  This is more live art, reflecting Storer’s roots, and often resorts to stock images, neglecting some of the naked possibilities provided by the elegant set.

Perhaps, on a mainstream stage, recurring motifs of being wrapped in cling-film, blood-letting, and rituals of cleansing are escaping their previous realms of aprés-avant garde performance art and devised student theatre; then again, perhaps there is a reason that they have rarely succeeded on a grander scale.

I leave with the lyric from one of the show’s musical accompaniments resounding in my brain: “Don’t indulge in sleepless nights, lead the dark into the light.” 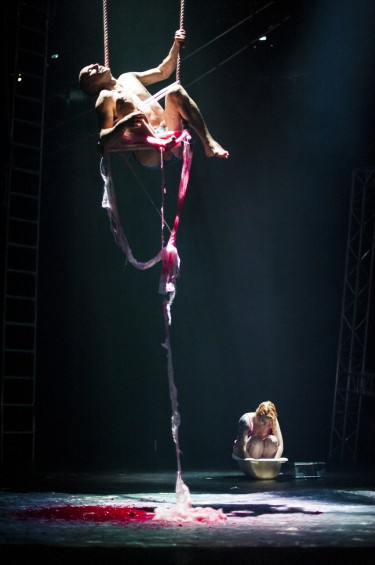