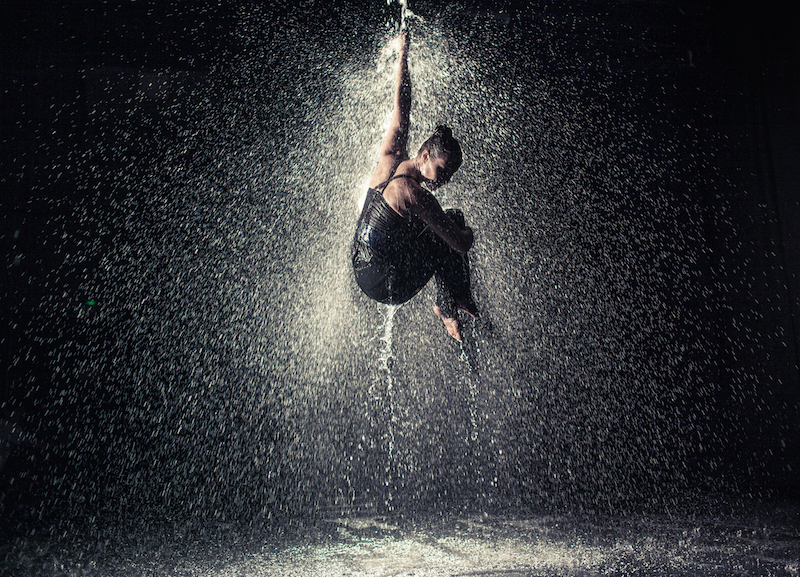 WireDo, which starts the evening, is a new work from tightwire walker Moisala that revolves around the question: “What happens to the body when we choose to change our daily routine?” The question is answered by the piece, which explores all the various ways to interact and use a tightrope, both as an object and as an apparatus, using it as a set as well as a backdrop. More than this, both Wiredo and Pinta ask a more central question: how can a circus performer extend a speciality act, which usually lasts 5 minutes, into a full 45 minutes show?

This, perhaps, is one of the reasons circus performers can have trouble winning big contests such as Britain (or anywhere in the world)’s Got Talent. Circus is impressive, always a crowd pleaser, but most great performers have only one major discipline and often one very strong act. That makes it difficult to progress in these kinds of shows: once their great routine has been performed once, it becomes hard to offer something else at the same level, yet sufficiently different, at the next round. The opposite is true for say, singers or dancers, who can do an upbeat song, a downbeat song, but somehow give an impression of variation. Of course it is possible for circus performers to do the same – but it’s much harder. There are countless performers out there who do the same act everywhere they go and have done this act for years and years. It is an act that they have shaped and drilled to perfection, that is exactly the right length and exactly the right tone. And it can be hard as a solo performer to stray from that format.

So when performers have to extend an act into a show, they have a few options. One is to invite more performers to join them and add other disciplines to the show. Another is to be multi-disciplined themselves and switch between talking and, for example, juggling and unicycling. Another is to add to their initial discipline a mixture of dance, physical theatre and non-circus related things. That is the choice made by Hanna Moisala in WireDo, where she mixes tightrope with Shibari, the art of Japanese rope bondage. 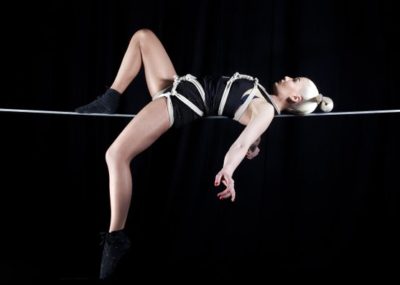 Both things go quite well together. The bondage ropes are reminiscent of the tightrope, the artist wraps herself in layers of complicated knots and use them to tie herself to her apparatus. The result is a piece that explores complicated relations between the artist and the wire, relations that push and pull and get tangled, that hang and slide and click through carabiners (which are basically metal knots), and ropes that always oscillate between slackness and tautness.

There are lovely ideas in WireDo and the set looks great. However the overall Japanese theme seems a bit too obvious and, most importantly, it sometimes feels like some of the dance parts aren’t really necessary and are just used as fillers to make the show longer. The two times that Moisala got on the tightrope in the traditional way were the highlights of the show, and where she looked most comfortable.

In Pinta, performed by Salla Hakanpää and directed by Ville Walo, the transformation to turn a 5 minute act into a half hour show is seamless. The piece feels like a complete whole where there isn’t a differentiation between the time spent on the rope and off the rope. Pinta reads like a visual poem. A woman enters the stage where there is but a single rope, vertical amongst rings of sand. She swings and disturb the circles. As she climbs the lighting changes. White lights reflect themselves in a dark water invading the stage. The moon drowns in an ink stain. The whole stage is a mirror. Gradually the piece becomes more agitated. There is swinging and there is splashing, along with a nicely immersive soundscape. The piece climaxes with Hakanpää at the tope of the rope, hanging under pouring rain and flashing strobes. It’s a very strong image – though perhaps not unique it is very effective. It’s hard not to get emotional when aerial, rain and strobes are combined. last year one of Circus Maximus’ finalist Angeliki Nikolakaki did a rain piece which was similarly intense in some aspects.

Pinta also involves some projection showing Hakanpää under water, drowning, or perhaps breaking free to explore the relationship between rope and artist in a gravity-free context. Perhaps too slow in parts, the piece remains poetic, almost haunting. There is also something to be said for the technical challenge required to turn Jackson’s lane into a temporary swimming pool.

At the end, what mostly separates Pinta from WireDo is freedom, or the lack of it. In Wiredo everything is confinement, restriction that comes from knots and carabiners, a taut wire, getting tangled into ropes, being tied to the wire. Everything in Pinta is about freedom: freedom to hang and swing and swoon, freedom from gravity under water, freedom to live in the splashing, freedom from life in the drowning.