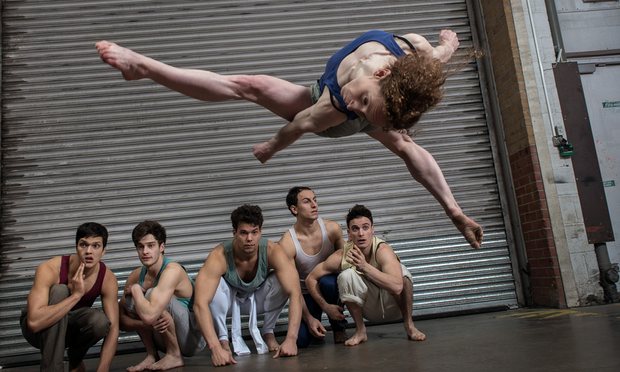 The fifth Circusfest at the Roundhouse closes its final week by hosting British-based Barely Methodical Troupe as they premiere their second show. The popularity of circus for the masses is resoundingly apparent as they launch Kin to a full auditorium, boasting a significant proportion of under-30s.

To whet our appetite for a good gasp, we have an amuse-bouche from new circus concept Pop tonight. It is a 20-minute work in development, hoping to be built into a full-length piece in 2018.

The strength of Pop as a vehicle for circus is its clear, believable narrative. Granted, things begin a bit ‘mid-90s Adidas commercial meets Shoes at Sadlers Wells’, with white light-up trainer boxes being passed around as choreography amid the odd dramatic lighting cue, yet as soon as our two doomed lovers (read: Sports Direct co-workers) start talking about each other, we are ensnared.

Both live for producing music. One is hampered not only by self-doubt but by tinnitus. The pain and fear caused by this diagnosis is an excellent vehicle for commendable hoop work from Sam Cater and a sustained, controlled and sinister rope solo from Alfa Marks as our heroine’s doctor.

Sophie Duncan is a perfectionist of a dancer and it is glorious to watch. She is proof that a dynamic performer can still present the arches of her feet like a classical dancer, even in trainers.

Meanwhile the more aurally endowed half of our duo, LJ Marles, turns out to be an excellent and unusual straps artist. He ascends the straps as his friend fights failure at a bus stop. It works. There is also an inspired moment of comic relief when, as he approaches the decks to deliver his masterpiece, Kaner Flex and Shakirudeen Bonetics Alade emerge and begin contorting, bare-chested but sporting surely the most bedazzled trousers seen at the Roundhouse since Jimi Hendrix was here. All credit to Frank Strachan’s costume design.

Things are unresolved at the end of Pop tonight and that is a very good thing. More could be done with the Chinese pole framing the stage than the crucifix drops seen, but a full-length piece would allow enough scope to explore this and every aspect of what was a brilliant kernel of a show.

An interval as long as our opening piece gives way to Barely Methodical Troupe’s world premiere of Kin.

BMT have created a show where five male suitors posit themselves atop plinths in laurel wreaths to compete via circus – oh, and to answer the occasional Blind Date question via drop-down mic (‘What scares you’ anyone?). The lady asking is sixth troupe member, Nikki Rummer.

She is an incredible gymnast and athlete. She has nerves of titanium, or adamantium, or unobtainium or whatever superheroes nerves are made of. Here, she is also bound by monosyllables, melancholy, clipboards and harshness. It is not her fault. She barks commands, pushes a buzzer when she is bored and only lets the men drink water occasionally after she’s basically out-tumbled them and beaten them up.

It is unclear whether they will be forced to do circus to death, and one has bizarre images of poor, adorable Jonathan Bendtsen diabloing himself to the bitter end trying to court the girl.

In an era where so much of circus has been polished, costumed and makeupped to an other-worldly realm where aerialists are seen and not heard (except perhaps to bang wooden blocks or chatter in a made-up language), the strength of companies like Barely Methodical is that we get to see the camaraderie. We hear the ‘Change!’ and we relish the moment when a crash-mat is moved or an athlete spotted on a landing. We feel honoured to be privy to that human reality. That is perhaps why a Hunger Games idea is jarring and awkward in this context.

That said, there are some amazing performances here and the personalities amongst the men are allowed to shine.

Dancing a sexually explicit comedic routine to Purple Rain barely 90 minutes after it was announced that Prince had left this life is a tough ask for anyone. How Beren D’Amico managed to make it reverent and humble is astounding.

Another moment when Louis Gift talks of the widow’s peak that runs in his family (his dad is the front-man of Fine Young Cannibals) adds a genuine and funny element.

The third founding member, Charlie Wheeller, is truly king of the Cyr Wheel, delivering a poignant performance. He is later joined by Bendtsen and they form a trio with the wheel in a real highlight of the show.

Hand-to-hand duo D’Amico and Gift can really balance, and it is sublime. Add Jean-Daniel Broussé to the mix and you will see things here you have never seen before. Plus, you’ll get to laugh at the latter’s accordion skills.

The real finale here isn’t about whom Rummer chooses in the end. It shouldn’t be. It can’t be. No, the real finale is the previous scene involving a teeterboard. Take something to dig your nails into besides your friend/lover/relative’s arm, but do not close your eyes.