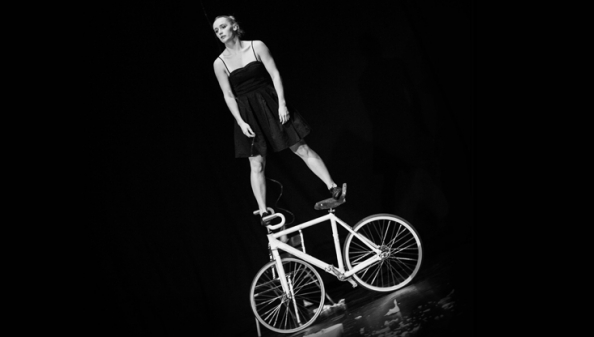 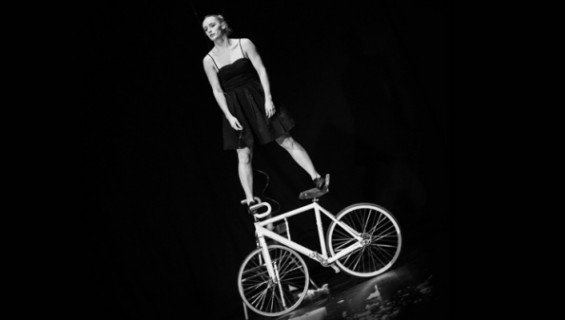 In their debut show Triptych, circus company Bikes and Rabbits demonstrate an unusual affinity with objects. Where a heeled shoe appears, solo performer Alice Allart sees a swinging club, a head of lettuce becomes a rhythmic gymnastics ball. Oddity inhabits this tripartite production gently chaperoned by the greenhouse of new circus that is Jackson’s Lane.

As its focus moves from Twenties China to modern Russia, Triptych’s set design certainly piques the interest. The stage in the venue’s main space benefits from a lack of safety curtain so the aerial props can easily be hidden from view. it’s an intriguing manoeuvre which allows the first act’s prop, a white bike hung just off centre, to catch the eye from the start.

Titled Anastasia, the first section describes a woman’s struggle to be believed by an authority. Who she is railing against is left ambiguous and the harsh lighting evokes governmental interrogation. Allart’s voice spirals through madness and snippets of momentary sincerity. We don’t know who she is or where she is but we do know being in the air, cycling wildly is an escape from what lies below.

The voiceover is distracting and clunky. Allart’s spoken word contributions lack context and it is unclear how they link to the show’s different sections. The physical elements are stronger with Allart demonstrating an interesting range of dexterity on the swinging bike. Rigged from a central point, the bike is manipulated as a trapeze, simplistic traditional tricks executed amongst pedal balances and swinging circles.

As a three piece performance, elements of femininity are explored throughout. A strong visual start is disruptive, Allart’s deft movement skills lost in what appears to be a mental health facility. The text, spoken through scratchy tape and live voice could be edited bearing in mind, it’s difficult to critique non-physical language used in circus. Despite finally being accepted as a national art form, circus performance is still only a student of including text in a piece. Not all acrobats are yet fully fledged actors and it’s good to see this being approached.

Throughout the show, Allart demonstrates a strong technique on the balance bike – a prop that’s becoming as popular as the Cyr wheel for circus students. Although the rigged bike looks spectacular, she shines throughout floor based work, perfectly aligned and comfortable manipulating centrifugal forces.

The second piece, Something Special, is jollier, made up of quirky puns and a delightful, cabaret awareness of the audience. Using popular music, the character takes control of the stage, presenting a comedy of vegetables.

Finally, the stage falls black and the remains of a cabbage are swept away for Chang’E. The performance is concluded with this tight wire based ceremony inspired by Eastern influences from kimono to makeup and mask.

Although its execution leaves something to be desired, Triptych is a thought-provoking concept with an exuberant centre, Triptych provides a good sketch pad for its core performer.