Christeene Pulls The Trigger At Soho Theatre – But Is It A Hit Or Miss? 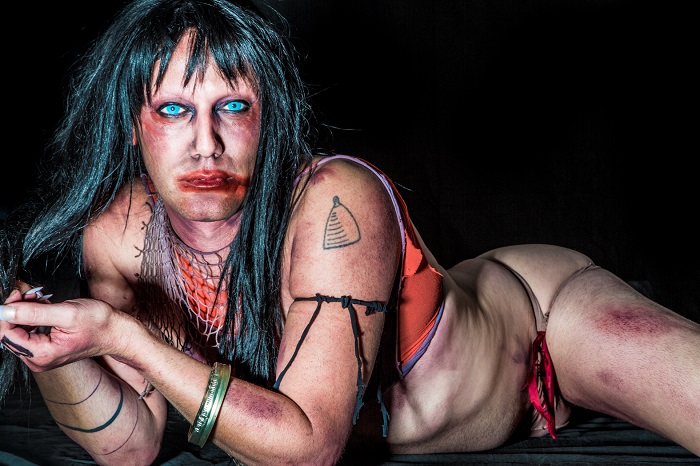 Christeene is what nightmares are made of – a genderfuck powerhouse of terror in tatty underwear who seems to have just emerged from the sewer.

With the Soho Theatre stage bare save for hazy UV lighting and a few DIY props, the US alt-drag queen inhabits a grimy sex dungeon infused with filth and transgression. The latest show Trigger brings to the fore this artist’s formidable presence and an in-your-face aesthetic used to command the audience through terrifyingly piercing stares, extra-terrestrial screeches and angry stomps.

It is a full-on hour of sensory overload, and a germophobe’s idea of hell on earth. Spit, sweat and pints fly around the stage, body fluids are exchanged freely and the American revels in obsessive compulsive play with their body throughout. Oh, and let’s not forget the horror-inducing audience participation which ranges from being grabbed and licked to being snogged by the drag terrorist. Resistance is futile – it won’t stop you from getting the Christeene treatment.

The whole concept of Christeene defies common forms of definition. On a personal level, Christeene’s existence challenges the very meaning of drag : unpolished, untucked and underdressed, Christeene adamantly refuses to be labelled by gender pronouns. On a performance level, it would do Christeene a huge disservice to try and define the genre-defying repertoire – it’s music, it’s rap, it’s live art, it’s parody. Christeene’s performance falls into all of the above categories, but has the potential to subvert every single one of them.

Beyond the savagery and shock value, Trigger has in fact created a space (or, in Christeene’s words, “a stanky place”) that is both inclusive and transgressive. Referred to as “the boys”, the rotating cast of backup dancers represent diverging forms of masculinity and bodies that are cisgender and trans. Sometimes Christeene can be a bit of a preacher, but a pretty damn good one, so the socio-political commentaries sit nicely in the show. With a rusty voice the performer chants slogans like “a hole’s a hole”, “ride your inner pony” and “masculinity is dead”, and then hits the point home with a provocative and occasionally joyous number.

Christeene: Trigger is here to provoke and to point quite literally two big middle fingers at heteronormativity. It is the kind of show that will leave you speechless, dazed and a bit fucked up. It is something that needs to be seen and cannot be unseen. Holding the audience hostage in the bowel of filth and genderfuckery, Christeene is rearing to unleash that inner pony in every single one of us.