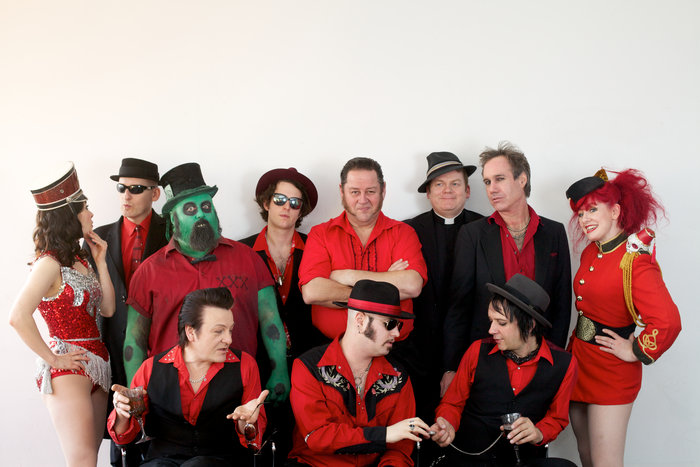 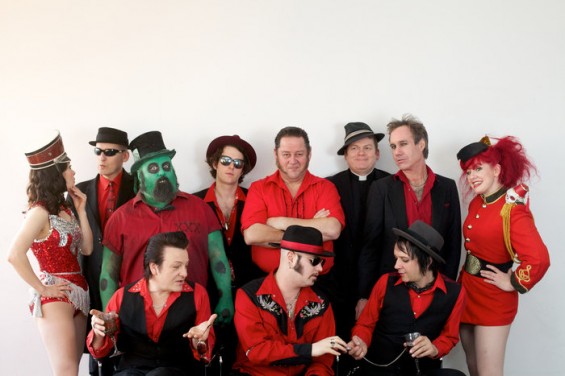 A treat for confirmed fans, though perhaps the super-fans own many of these tracks already. The opening track, an instrumental, Last Dance Of The Silver Wolf, is a drums-driven stomper with a lachrymose fiddle intro that really rocks, acting as an overture for the rest of the band’s story so far. The album showcases this 6 to 12-piece band’s range of instruments, their accomplished playing and the fusion of many musical styles, with Paul-Ronney Angel’s deep and growling vocals scratching over the top.

Stand-out tracks include the hell-raising gypsy tango Corpse In My Trunk, complete with empty bottle percussion that sounds like a skeleton-bone xylophone and the macabre story-telling of Orphan’s Lament. The song-titles are suitably dark and devilish, though titles like You Got Me (By The Balls) are reminiscent of the comedy spoof rock band Spinal Tap; I’m sure the Urban Voodoo Machine have their tongues firmly in their cheeks for that one.

This compilation album serves as a fine retrospective celebration of The Urban Voodoo Machine, but is also a great introduction to their music for the uninitiated.

The Urban Voodoo Machine play the Glastonbury Festival this week. Check out our review of their live show for an idea of what to expect.

This album as well as their next one Love, Drink & Death are available through the official website:  www.theurbanvoodoomachine.com