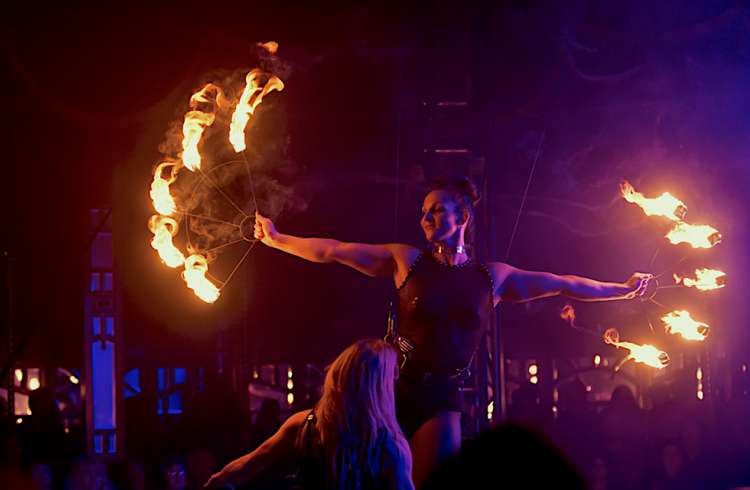 Do you want to see sexy people doing dangerous things? Do you want to see dangerous people doing sexy things?” shouts compere Ophelia Bitz into the crowd – and this line more or less encapsulates the entirety of AirCraft Circus’s new show Boudoir Circus. It’s a no nonsense, big, flashy circus show with fire, acrobatics, girls kissing girls and most of the cast taking much of their clothes off throughout. It may not be subtle, but sometimes what you want is for someone to do a damn backflip for your entertainment.

There is a strong cast tonight including London circus and cabaret favourites such as Felipe Reyes, Korri Singh and Andromeda Circus who are the three highlights of the night. Korri’s trapeze act is gentler and more poignant moment in this show which is welcome after the preceding full on action. Elsewhere the group work is nicely put together and makes this feel like more of a show rather than a succession of acts, with many of the performers coming back several times to help in each others main moments.

Bitz does well tonight, connecting with the crowd from the beginning with a mixture of profanity and outrageousness in equal parts. Her opening song is expletive laden and welcomes all of the perverts in the audience, citing every sexual practice you have ever heard of and a seemingly endless number of which you haven’t. Later she hangs from a strap and swings out into the audience while shaving her own head with an electric razor, providing a surreal and mad “well I’ve never seen that before” moment.

Some of the acts aren’t quite as strong and the relentless focus on SEX SEX SEX feels a touch trashy in places, so perhaps some styling to bring the show together would have helped. There is an old quote by Mae West that goes “sex is an emotion in motion” and, at times, there is a feeling that the emotions have been left out of Boudoir Circus in favour of big tricks and full throttle performance. Some of the scenes portraying power play and S&M feel more like displays of what sex should be rather than something that is actually erotic. Portraying sex sexily in art is always hard – so it might have been useful to have another thematic or narrative device to push the action forward in places.

Like a dirty one night stand Boudoir Circus may not leave you with long lasting fulfilment, but it’s certainly fun and stimulating and makes you feel like the world is a little more exciting. And with a little work this is a show that could develop into something more meaningful.