Banned By TfL, Interviewed by TIC: Meet The Master Of The Macabre 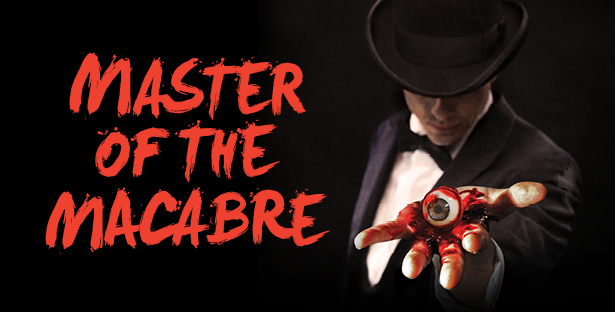 Opening tonight, one-man magic show Master Of The Macabre already scored a controversial note of notoriety when Transport for London refused to allow their official poster (above) to be shown on the Underground; whether the overt horror of a bloody eyeball is more offensive than the implied horror of any poster suggesting Adam Sandler is alive and well and still making movies is debatable.

If magician Benedict Barber was aiming for a mordant atmosphere, he could not have found a  venue than The Vaults. The latter-day neighbour to the epochal Old Vic Tunnels is a collection of subterranean cave-like spaces beneath Waterloo station and the occasional rumble of trains overhead gives some insight into what it could feel like to be buried alive while others carry on above and oblivious.

In Master of the Macabre, he takes the audience on a dark autobiographical journey. It begins with his introduction to magic at the age of just five, goes through the trickery he used at school to alarm his fellow pupils and terrorise his teachers to a shocking experience as a young adult that has shaped his life both on and off the stage.  We spoke to him about his latest show.

That’s one seriously gory image you chose for your poster. What was the creative thinking behind it?

It captures some of the feeling of the show in a way that is not immediately obvious. It will make sense when you see the production.

Every artist pictures “horror” in a different way. How did you come to your own definition – did you delve into childhood memories or was it more about how other artists have interpreted horror e.g. on film or in shows?

A combo of the two. I studied everyone from Christopher Lee to the joker in the Dark Knight. Other psychotic roles that I studied include Anthony Hopkin’s work as Hannibal Lecter, Hitchcock films per se and the writings of Stephen King.

My own definition of horror is somewhat like Hitchcock. In many ways it is far scarier to let your own mind manipulate the stimuli and create its own picture than you providing the stark image.

This leads me back to the poster, the image, horrific as it is, actually refers to a lighter moment in the show while the beheading at the start of the show is from a recurring dream of childhood.

How would you characterise your type of magic? Are you more about the sleight of hand like Master Of The Macabre‘s director Tony Middleton? How do you think you distinguish yourself from other young magicians?

I have a totally unique style. My version of horror is semi autobiographical as I have truly experienced some horrific things in my past. I love to treat my audience with respect, to look after them and to provide whilst at the same time terrorising them in places. I love sleight of hand and manipulation of the human mind.

My style is charismatic, charming yet people know that my story has disturbing elements to it. I reveal a little more about my past as the show progresses but it shapes my material in that I had a horrific experience (a car crash) that has changed the way I view the world and shapes the form of the material I choose to demonstrate.

Which magicians inspired you? And where would you like your career to ultimately take you – big Vegas shows, a series of one-off stunts like David Blaine, a TV career like Dynamo or creating a character like Piff The Magic Dragon?

I am only interested in performers who can perform live. Some people make a living out of tv tricks / camera cutaways etc this is not how I define magic. It is akin to putting Superman against a green screen and then telling people he can really fly. For me it is all about the live connection with the audience.

I like Piff very much, I do like comedy and artists completely unlike myself, and Blaine’s last special was exceptional. The greatest ever was the secret cabaret 20 years ago with Simon Drake.

Catch Master Of The Macabre at the Vaults until 1 November. Tickets are £15.00-29.50. Performances: Tues-Sun 7.30pm & Sat mat at 2.30pm. More information can be found on the official Vaults website.