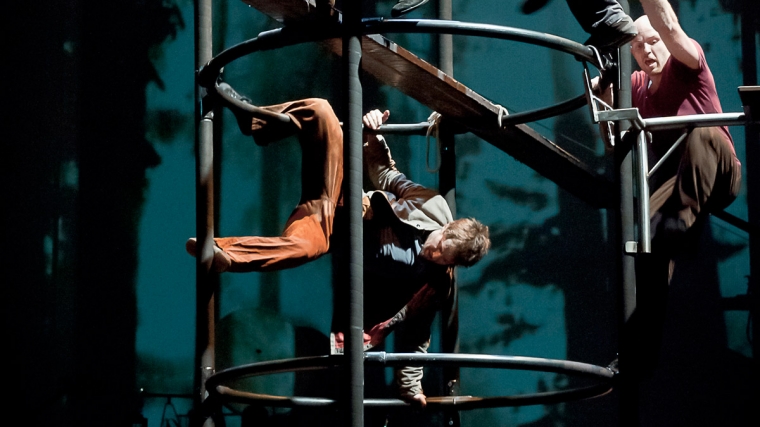 Belgian contemporary circus company Feria Musica will be presenting the atmospheric Sinué for two nights only as part of this year’s Brighton Festival.  Artistic Director Philippe de Coen is a major force for the circus arts in Belgium, receiving the  2010 “Prix SACD du spectacle vivant”, and the company’s previous production Infundibulum was voted Best Circus Show by the editor of Circus Magazine but they’ve never yet made it across the Channel.  We spoke to Sophie Tessier about what we – and they – might expect in Brighton. 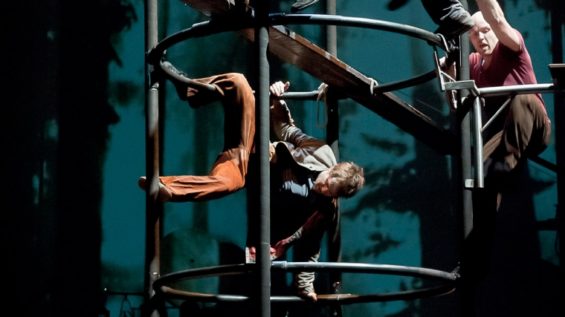 Feria Musica formed in 1995, but this is your first trip to perform in the UK. What’s taken you so long?

Well, it’s not really a choice from Feria Musica, it depends much more down to the UK’s programmers. We had some contacts before with a few festivals in the UK but it had never been realised. I received an e-mail from the Senior Producer of Brighton Festival one year ago saying she was interested in our work. I think she received our newsletter and decided to contact us from the pictures she saw on our website. And finally a few months later, I received a letter telling us that she was seriously considering including Sinué in the 2014 edition of Brighton Festival. It was a great news for us!

How do you imagine a British audience may respond to your work, compared to audiences in France or Belgium?

Various directors of British festivals really appreciated the show so I’m quite confident. Sinué is a sensitive experience: you have to let yourself associate things you see with your own experience of life. This is the key! And once you get this freedom, you can feel intense emotions, whether you are French, Belgian or British. I don’t know the British circus scene so well, but I have the feeling that it is closer to cabaret or musicals than it is in France or Belgium. I might be wrong but I don’t feel that there is enough space for contemporary circus.

Sinué is loosely based on a children’s story – is this a performance for children?

Sinué is a performance for everyone who has kept their childish mind. To create the show, we were inspired by all the elements that make you grow up like games, relationships, loneliness, fears. The thing is that you grow up all your life long, that’s why Sinué is for everyone. It is not especially created for children. We got an inspiration from an short illustrated story but we only kept a few elements of it; the finished product is a distance away from the original narration now even if it was part of the creative process. We mainly kept the powerful and vertiginous visual atmosphere from the drawings.

What specialist skills do the performers bring to the production?

For Sinué, we needed Chinese pole acrobats, but first of all, skilful artists. Three of them were performing in Infundibulum and we knew they had the ability to appropriate the set and develop their own language. Apart from the artists he knows or has already worked with, our Artistic Director Philippe De Coen has his own “spies” in circus schools (ESAC mainly, the Belgian professional circus school) and we see a lot of shows to pick out talented acrobats.  The concept of the show came first, followed by the design of our structural tower.  Then our five original cast members (Mathieu Antajan, Natalia Fandiño, Loïc Faure, Julien Fournier, and Pedro Sartori do Vale) were bought in to move with the structure. It’s a strange vertical element; you can see a tree, a dungeon, a shelter, whatever you imagine.  As things keep on changing in life, the tower no longer stays vertical.

The company name (which translates as ‘Carnival Music’) makes me wonder about the importance of music and musicality in your work.

Feria Musica is a name chosen 20 years ago, by chance, I would say. But, you’re right, music is our speciality. The company was created by a musician and a trapeze artist who both wanted to make something special with their own discipline. Music and acrobatics are created at the same time; there is not the music or the acrobatics first, they are always linked. We consider music as a strong emotional vehicle.  For the first time in Sinué, we are working with small machines where the mechanism creates a rhythm or a melody. The machines are all made from recycled elements. It is linked with the idea of growing up; it is as if the music was created little by little, a layer after the other, building a kind of “soundscape”.