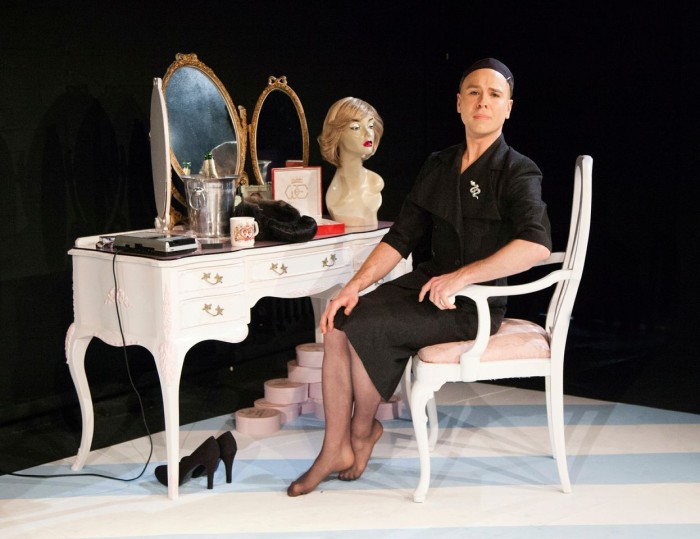 Who better to take stock of this play about two almost-queens than two real queens?

Chris Ioan Roberts’ Dead Royal intertwines the stories of Wallis Simpson and Diana Spencer. Roberts plays these two women who never quite made it to the throne despite behaving like a petulant old queen and an empty-headed young one. We sent Johnny Fox and David Lloyd-Davies, our oldest and youngest, er, Royal Correspondents respectively, to see it.

JF: I suppose this sent you scurrying to Google? Presumably the stuff about the 1937 abdication crisis went right over your pretty blonde head like a badly-aimed pearl necklace?

DLD: My knowledge of this scandal was based entirely on the weary interludes between Colin Firth’s stammering in The King’s Speech. But Chris Ioan Roberts’ script gives enough clues without crudely reprising for the antiques in the audience who lived through it.

JF: I didn’t ‘quite’ live through it, but I wondered whether the Duchess ever did invite Diana to Paris. It’s quite a delicious idea that Wallis might warn Diana off marrying Charles.

DLD: It’s the sort of mischievous speculation Roberts weaves into the script. The Duchess’s throwaways are intelligently comic.

JF: I’m sure we’ve both had experience playing two men at the same time, but how do you think he did with two women?

DLD: Although the sense of caricature is apparent, his Diana was more disappointing at least by drag standards. If you’re playing a woman you’d shave your 5 o’clock shadow for a 7 o’clock show, right? Even Elaine Paige does that.

JF: I believe in her reflection from a glass coffee table, yes. Were you envious of Roberts’ controlled gag reflex? And what about the other stage tricks he turned?

DLD: Robin Soutar’s staging was appealingly sensuous. From misting the air with cloying perfumes to suit each character to projectile vomiting half a bottle of Gaviscon across the stage while Gone With The Wind played on the old television.

JF: I found my attention straying to GWTW occasionally; it’s a cute trick to give Wallis the voice and mannerisms of Scarlett O’Hara but I wished he’d found a persona for Diana that didn’t make her look so frumpy. She had fewer good lines too, his only real joke was about her legendary dimness – I always loved how Debrett’s listed her ‘qualifications’ as ‘O-Level Needlework, Colonel-in-Chief of the Coldstream Guards’.

DLD: As an old hag, how do you think he captured Mrs Simpson?

JF: Well, he couldn’t pull off the ‘too rich and too thin’ thing because he’s a robust Australian lad, although I liked his crouching gait and screeching imperiousness with the Spanish servants. ‘Orangina’, nice touch, I so wanted her to appear.

DLD: As with so many things after 50, I expect you found it didn’t really get going?

JF: It was a slowish burn to start with but once in full-pelt there were some great swipes at sacred cows like the Queen Mother: ‘a face like yesterday’s Eton Mess’. If she had met Diana in 1982, Wallis would have been 86. A bit more research as well as more of the sharp lines he’s so good at could make this a winner.

DLD: At least it got you out of the house, dear.

JF: And you home before your ankle tag went off.