Alexis Gregory: “SLAP Is A Play That ‘Goes There’. In Heels.” 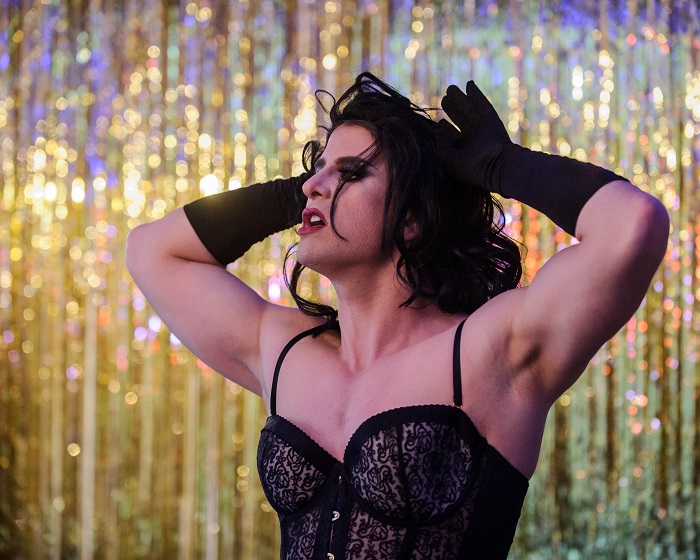 Alexis Gregory talks to This Is Cabaret about the one-off return of his hit play SLAP (recently long listed for the 2016 Polari Prize and currently being turned into a film) about a transgender hooker Dominique, as well as his views on Caitlin Jenner and transphobia within the gay community.

How much of SLAP is inspired by real-life events that have happened to you or people you know?

All of it! That is why audience members respond well to the piece, I think. They know it comes from a true place. When writing SLAP, I took many real life events and expanded them – pushing them as far as I could. All three of the characters in ‘Slap’ are extensions of myself and explorations of my journey and what I’ve learnt and what I’ve struggled with, so it’s a very personal play.

Thanks to the legendary Rikki Beadle Blair’s inventive staging, the audience sit inside Dominique’s flat, so they’re as close as possible to these dramatic and difficult situations that the characters find themselves in. The initial idea for the play came to me from something that was told to me in a bar many years ago. As I was writing the script and piecing the rest of the story together years later, I was surrounded by real life events and scenarios that made it into SLAP or influenced the script. I’m really excited to bring SLAP back for this special one-off performance hosted by The Telegraph for their Pride celebrations. It’s being performed at Concrete in Shoreditch which we are transforming for the audience into a “den of iniquity” as someone called it!

The transgender landscape has changed immensely since SLAP first came out, not least through the number of high profile names coming out as trans such as Chelsea Manning, the Wachowskis, Kellie Maloney and Caitlyn Jenner. Do you still feel SLAP is as relevant now as it was when it was first performed?

I agree with you that elements of the transgender landscape have changed dramatically over the last couple of years and that’s a wonderful thing. Things seem to have changed rapidly with many inspiring community figures leading the way. These are truly exciting times, however, we mustn’t become complacent and believe that everything is now “OK” in the LGBT community – it just isn’t.

Not in London, not in the UK, and certainly not beyond. We mustn’t be lulled into any false sense of security in regards to our rights and how “accepted” we have become. I truly believe that.

People often focus on Dominique’s issues as she is central to SLAP, but the gay male identity of the character Danny, is more relevant than it ever was. He copes with his homosexuality via Dominique’s transgender status. Meanwhile John, the third character identifies as straight but has his own challenges too. Frankie Fitzgerald and Nigel Fairs who play those respective roles are amazing, their performances are on another level and I think some of the best acting you can find on the London stage right now.

SLAP only got its first official run at Stratford East last year, it was developed before that at the theatre and we did a special Channel 4 performance onsite at their HQ too. We’ve had the most wonderful audiences and so SLAP has been on this whole journey.

Director Rikki said he hopes SLAP is still being performed in thirty years’ time, and that is a dream I share. However I don’t think I’ll be squeezing into Dominique’s corset in thirty years time; even if it is Agent Provocateur!

As a gay man, how does it make you feel when a transgender celebrity like Caitlyn Jenner says that they could not support certain gay rights like same-sex marriage?

I disagree with Miss Jenners’ unsupportive comments on gay marriage, of course I do. I find them troubling and disappointing, as so many of us do.

The gay community seems to have a transphobic streak with some members going as far as creating the “Drop The T” campaign which, when it comes to Stonewall riots and all that followed, claims that “the transgender crowd have taken sole credit” . Would you ever confront someone who said something you considered to be transphobic?

I don’t think the gay community as a whole has a transphobic streak! That would be too general a view. Yes of course there are unfortunately some members of the gay community who are not accepting of the trans community. People and their reactions are complicated – it can be hard to understand why an individual may be so treated and offended by someone else living as their own authentic self.

The gay and trans worlds lock horns a bit in this play in the forms of Danny and Dominique. Yes, of course, I would challenge transphobic comments in the same way that I challenge homophobic comments and attitudes. I haven’t created all of this work highlighting these issues to then just keep my (big) mouth shut at such a vital moment!
How I respond to criticism depends on what was said and by who. Sometimes the comment came out of a place of not understanding and perhaps needing some gentle explaining. Sometimes the comment was intended to hurt.

Some people would say that, by ultimately being a fantasy piece, SLAP raises real issues but fails to provide any serious discussion or evaluation of them. Would you say that was a fair comment?

That’s not the overriding view of the vast majority who have seen this play. I call SLAP a “realist fantasy” and a “tragi comedy” and I believe it to be a piece full of contradictions that challenges the audience, for sure. I write in a very stylised way and push the boundaries as far as I can – and so yes, there are some fantastical elements.

As well as looking at gay and trans issues, SLAP explores issues around families, addiction, abandonment, childhood, mental health, class conflict, identity and denial, so there’s huge scope for emotion but also lots of dark humour and jaded glamour (my favourite kind of glamour!) SLAP is a play that “goes there”. In heels. I like that about the play, the big OTT journey it embarks on.

You’ve spoken previously about turning SLAP into a film. Is that still a prospect? What other plans do you have for the work and for yourself as an actor and playwright?

Yes, I am currently working on the screen adaption. It’s really exciting to be doing that so that SLAP can live on somehow. Up next theatre-wise in October, my verbatim theatre piece, Safe will open. It’s a play about LGBT homelessness, presented in the Square Mile at the London Theatre workshop.

The piece is created out of my interviews with some amazing young people who I met via the Albert Kennedy Trust, a charity that does vital work with vulnerable young people. Their stories and tales of survival in the play are extraordinary. I’m not in Safe myself so will be in writer/producer mode.
Next year my play Bright Skin Light will have a run too and I’m also developing a short play I wrote into a full length piece, called And Where There Once Were Two – it’s just been performed with the Arcola Queer Collective. So it’s all go!
SLAP is back for one night only on 21 June at Concrete in Shoreditch, as a gay Pride celebration supported by The Telegraph, in aid of Clini-Q, London’s transgender wellbeing centre.
Tickets £12: https://www.eventbrite.co.uk/e/slap-tickets-25841202733
Follow Alexis Gregory on Twitter @lexigregory
Cover image: Jane Hobson