A Superhero With Tourette’s Syndrome Takes The Biscuit 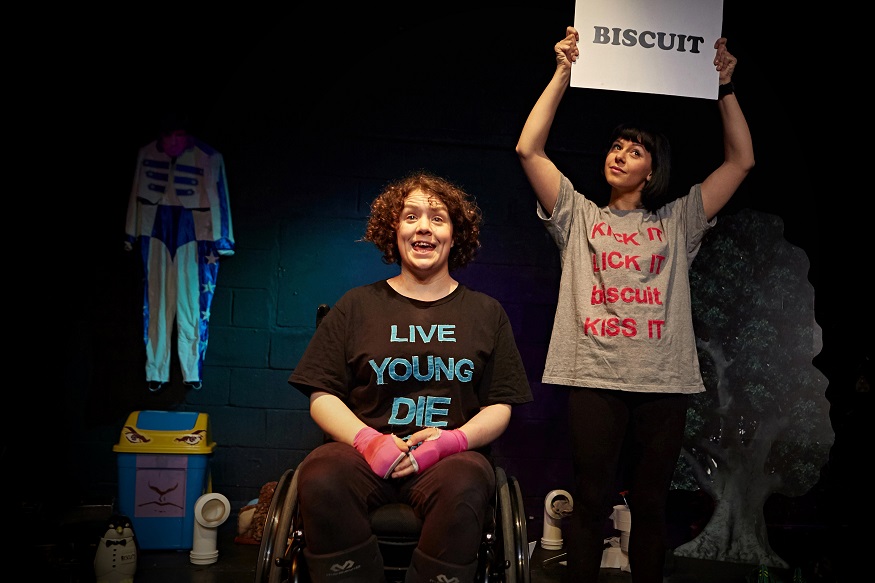 One of the victims of the fire that reduced part of the Battersea Arts Centre to ashes in March, Jess Thom’s Backstage In Biscuitland has resurfaced at the Barbican this week before it heads for a run at the Soho Theatre.

Bold, beautiful and bizarre, the show takes as its focus part-time superhero Thom and her Tourette’s syndrome. Throughout the show, she wriggles around, punches her chest and involuntarily says “biscuit”, “hedgehog” or “Aladdin” (amongst other more adult language). Her vocal and physical tics are the rock and roll of Biscuitland, providing an ongoing audio-visual backdrop to the monologues, puppetry and audience interactive sections.

What could be a painfully earnest exercise in navel-gazing is instead a highly dynamic experience. Thom and her assistant Chopin say that no two shows are the same and, given the highly unpredictable nature of Thom and the eclectic collection of props strewn around the stage, this is highly plausible. Non-scripted games between the pair and with the audience add random hilarity. Geraniums are bashed, strawberries are headbutted, biscuits are handed out and there’s even an organised Mexican wave of sorts.

More formal episodes exploring Thom’s experience of her condition are handled with a minimum of political correctness and there is as much learning as there is laughing. After describing how she was asked to sit in a sound booth at one gig so as not to disturb the other audience members, she merrily recounts how Biscuitland was conceived as an X-rated version of Beauty and the Beast. She and Chopin are a perfect complement, bouncing off each other and keeping the show running along at a merry pace.

Upbeat and participative, this feels less like a show about a medical condition and more a party we’ve gate-crashed. Thom and Chopin’s cheeky exuberance doesn’t just take the biscuit but the tin it came in too: an epitome of what has gone before, Biscuitland’s coda — in which the audience is invited to repeatedly sing out loud “We’re all having sex with animals/They all like it hard in the face” — is a topical and irreverent finale to an incredibly enjoyable show.

Tourettehero’s Backstage In Biscuitland continues at the Barbican until 26 September. Tickets are £16 plus booking fee. Londonist attended on a complimentary press ticket.

Next week, the show can be seen at Soho Theatre from 29 September-3 October. Tickets are £16 (£14) or £10 for those qualifying for Access Concession.