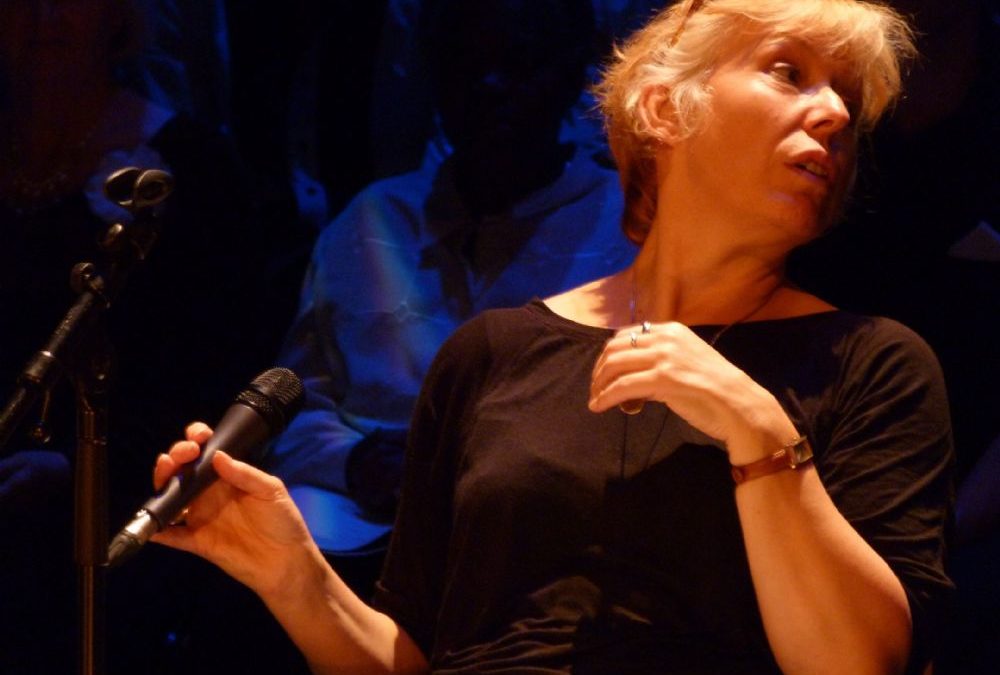 Barb Jungr is quite a challenge to reviewers.  With sixteen highly-applauded albums under her belt, endless five-star and superlative commendations, and an accolade from the Wall Street Journal that her 2002 Dylan compilation Every Grain of Sand was already ‘the most significant vocal album of the 21st Century’ you might expect such acclaim to have gone to her head.

It hasn’t, of course, she’s too refreshingly Northern and down-to-earth for that, and she has a true artist’s motive which drives her to give the same standard of performance in any venue, whether it’s New York’s high-toned Café Carlyle or, as last month, the foyer of the Queen’s Theatre in Hornchurch.

The intimacy of St James’s Studio suits her well: she’s like a table magician whose technical brilliance is even more stunning at close range but while you can see the rise and fall of her larynx and her superb control of the microphone you’re still surprised with the outcome and can’t understand how she does it.

And she does ‘do it’ time after time in this cunningly contrived set based on the theme of “River” or rivers, or canals, or it doesn’t really matter because even if she’d plucked sixteen disconnected songs from nowhere her wonderfully earthy, occasionally filthy and always self-deprecating narrative would stitch them together for you.

We start with a conversational Into The Blue Again before an hilarious anecdote about a Scouser interrupting her set at the Café Carlyle introduces Ferry Cross The Mersey at a pace slowed down to that of the sluggish muddy river itself and tenderized with pathos and meaning which surely never crossed the mind of Gerry Marsden when he wrote it fifty years ago.

There are several completely contrasting showcase pieces in this concert. The first is Ewan MacColl’s Sweet Thames Flow Softly a tone poem which takes the London riverbank as both landscape and metaphor for a love story that doesn’t quite work.  You sense this could also reflect Jungr’s own personal experience: she has an empathy and a resonance with lost love that feels neither manufactured nor uncomfortable. When sung pp it’s matched with effortless delicacy by Simon Wallace’s piano.

Via meticulously well-done but more predictably riparian songs like Waterloo Sunset and Suzanne – which comes with the best anecdote of the night about Leonard Cohen and a madwoman in a Portobello hotel – we reach a barnstorming A Hard Rain’s a-Gonna Fall whose lyrics Dylan said consisted only of the first lines of songs he’d never have time to write.  His version took eleven minutes with breaks for breath and to gather his thoughts but Jungr edits them out and belts it to the rafters as an angry and beautiful anthem.  Rapturous applause.  Interval.

The second half is no less strong, but you shouldn’t need a further catalogue of numbers to encourage you to see this extraordinarily talented performer next time she passes through London. Particularly if you have any singing ambitions of your own, hers is a masterclass in how to do it without gimmickry, or attitude, and on one of the hottest nights of the year without even a sip of water or a bottle on stage.  Part nightingale, part camel.

But there’s another setpiece that brings the event to a climax and the audience to its knees.  Jungr might well be expected to incorporate the odd Jerome Kern piece into her set – Smoke Gets In Your Eyes, for example, being such a jazz standard, or A Fine Romance which seems purpose-made for women reflecting on late love.  But with kamikaze bravery, Jungr selects Old Man River, a song tensioned with the struggle against slavery, with black ethnicity, with Southern Baptist evangelism and with muscular, masculine pain.  That a pale white woman from Stockport can deliver it with more musicality, more raw sinewy strength and more beauty than Paul Robeson or Willard White is a triumph of virtuosity over material more breathtaking than anything you’ll see in London this year.  Or next.  Or possibly ever.

Clearly, there is nothing this woman cannot sing.  Perfectly.