A Day and a Night at Coney Island 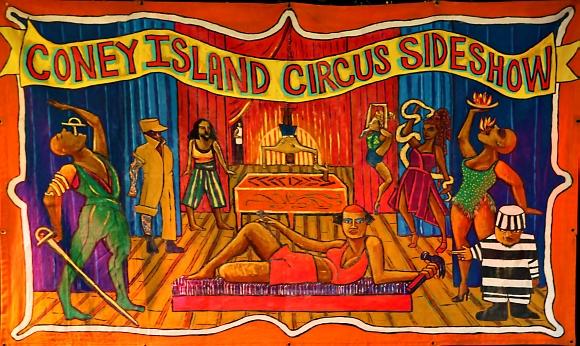 Many visitors are attracted to the iconic Coney Island amusement district of New York for its open air rollercoasters, games of chance, or sandy beach and hotdogs. For others though, the main attraction lies in a building on the corner of West 12th Street, transformed from it’s prior life as an army recruitment centre to the Circus Sideshow and museum.

Here, the traditions of sideshow shock entertainment are kept alive for a contemporary audience, passed on from performer to performer as each new wannabe must hone their skills from a master who’s gone before. The walls are decorated with giant murals that put a modern twist into the familiar antique banner aesthetic, and their creator Marie Thomas can sometimes be found offering workshops in the art of banner painting.

The not-for-profit organisation behind the Sideshow is Coney Island USA, whose motto, emblazoned on their website, is ‘Defending the honor of popular American culture.’  Set up by Dick Zigun 36 years ago, they also host magic shows upstairs in the museum every Sunday, produce the annual Mermaid Parade, and arrange other events throughout the year, including running a sideshow school. It’s widely suggested that the neo-burlesque movement can trace its roots back to this revival of Coney Island’s sideshow entertainment.

When the last big touring sideshow closed in the 80s, the performers came here and found a home to pass on their generations old skills. Today, the show is headed up by Alejandro Dubois, the Pain-Proof Puerto Rican, who has been part of the sideshow world for the last 15 years. He is fast talking and charming, grossing us out with his block-head routine one moment, enthralling us with his fire act that gracefully juggles flames across his body and out of his mouth the next.

There is a revolving team of artists who regularly work the sideshow. Zoe Ziegfeld shows off the snake tattoo wrapped round her body while wrapping herself further with a real albino python taller than she is. We see extreme upper limb contortion from Leo The Human Gumby (it’s a classic American cartoon character who’s really bendy – I had to ask!), who manages to find not one, not two, but three different ways of fitting his form through a tennis racket in today’s show. 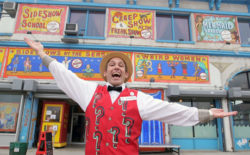 The whole show is introduced on the street with tannoy announcements and the regular live appearance of the grinning Mr Strange to perform a ‘roll up roll up’ style bally (short for ballyhoo). The performers refer to their schedule as ‘The Grind’, as they perform from 1-8pm throughout the day with only 10 minute breaks between rolling shows. What they offer is appropriate for family audiences – I notice it’s the big men who seems the most squeamish, the kids revel in it. Alejandro admits this does limit them in terms of how true they can remain to themselves in performance – ‘sometimes I just want to drop an f-bomb, ya know?’ – but when it comes to the evening shows, anything goes.

Tonight, usual Sideshow team member, Miss Coney Island 2015, Betty Bloomerz, is here with another crew. The Demented Dolls Of Sideshow are in town for the final date of their American tour, with a full-length all-female show featuring six darkly colourful performers and an array of skills that evoke reactions from pleasant cringe all the way to fist-in-mouth whaaaaa?!!

The show has been devised by the troupe in a way that blends their individual acts and allows them to co-exist onstage together in all their beautifully unique styles.  Hosted by the sneering, swigging, glass-swallowing Jenn.O.Cide, there is a loose thread of romance that ties the character performance together. Perky chic French contortionist Anaelle Spaghetti and Dutch diva Princess Tweedle Needle compete for the attentions of She-Man, a lothario drag-king creation from Marte Maritdatter – whose alternative human-pincushion character Princess of Scars turns up late for the party and wins Tweedle Needle with their shared royalty, pinning their bodies together in an elegantly literal interpretation of the Masochism Tango. 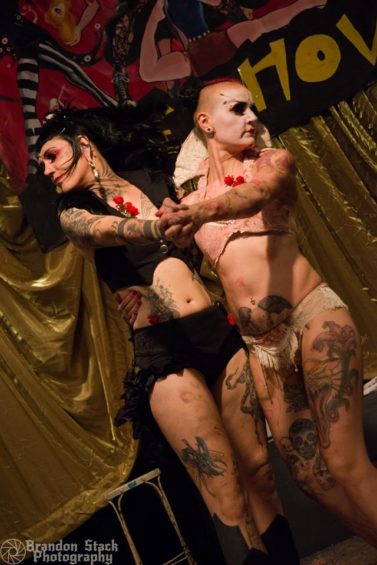 Fibi Eyewalker is a freakish oddity who brings an absurd extremism to the company. Although the boast about there only being six female sword swallowers in the world is to be taken with a large pinch of salt, having both Eyewalker and Betty Bloomerz here tonight is still rather a coup. The pair have a variety of shaped and sized blades between them, including one with a seriously serated edge, which they move in and out of their gullets with characterful panache.

From gullet to gusset: it’s only fair to mention the most eye-watering display in the show is not the blood that decorates freshly pierced faces, but a suspension of a swinging milk pail from Princess Tweedle Needle’s labial piercings.

The Demented Dolls of Sideshow take classic elements of midway performance and spin them into a fresh and fulfilling freaky evening’s entertainment. Here’s hoping their next tour brings them to Britain!