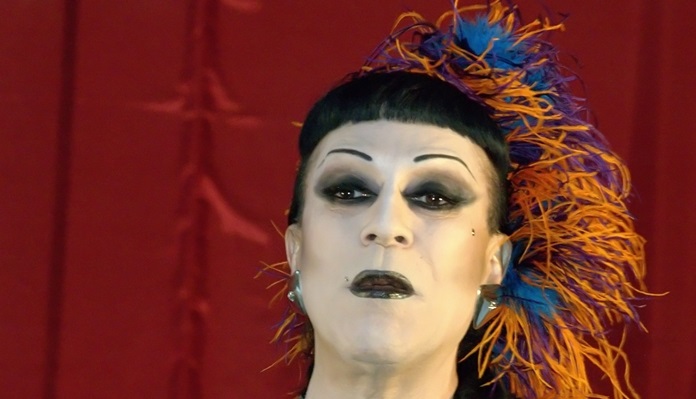 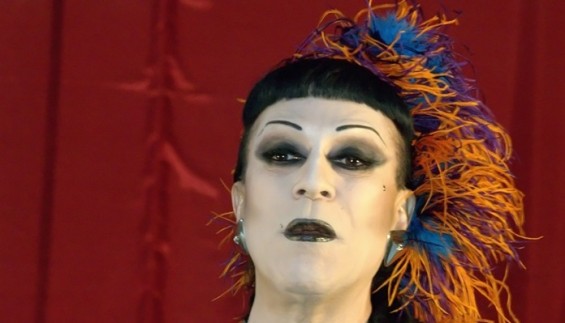 New York cabaret legend Joey Arias has travelled the world dealing in glamour, performing in palaces, backing up David Bowie on Saturday Night Live… and here he is today, in a basement in Soho. “But I like it,” he says, “that’s where the shit happens.” He’s got a point. I mean, if you’re going to drag a guy up on stage, stick a microphone down his boxer briefs and sing into his crotch, a Soho basement is the place to do it. But we’re getting ahead of ourselves – let’s get to know each other a little better first.

Essentially Arias is a witty songster, and this here is an evening of songs. The repertoire is varied, spanning jazz standards to the songs of Led Zeppelin via The Beatles, each one wonderfully warped. He cites Billie Holiday as his vocal inspiration, which is evident, though his trilling is infused with colour and playfulness as well as husky soul – as though Lady Day had run her pipes through an Instagram filter. He chirps and yelps and cracks and makes all sort of noises that a well-controlled human voice probably shouldn’t, yet it works. He makes you laugh, but I’m pretty sure he could break your heart too, in another time and place. Not here though. This is too crude for heartbreak.

At first it’s unclear whether Arias is fully in control of all his faculties, posing awkwardly and mumbling a tale of travelling with only the odd line of “pills” or “I just wanted some fucking scallops” audible. It’s an act (I think, and a very good one) but as the night continues and more vodkas are steadily delivered to the stage, the lines begin to blur – “Thank you, Cirque du Soleil” he quips as he expertly handles a fall down the stairs. I wouldn’t fancy my chances navigating a descent in killer heels, several shots down: you, sir, are a pro. And stumbling aside, once he makes his way into the audience it’s all plain sailing with some classic cabaret crowd conversation shtick, though pity the poor barman whose grandparents were quizzed about their sex life in far too much detail.

Arias’s voice has enough personality to support a show entirely on its own merit, so the smut and stockings feel like cheeky bonuses. And hats off to the pianist, who waited till the closing strains to whip out a stellar singing voice of his own. Oh, what a little vodka can do.