The Alarming Truth About Health and Safety in Cabaret

Preparing for his upcoming health and safety lecture, Preacher Muad’dib has researched the risk levels of most variety shows. C.J. Lazaretti talks to the sideshow maven about his grim findings, and what artists and venues can do to prevent dangerous accidents. 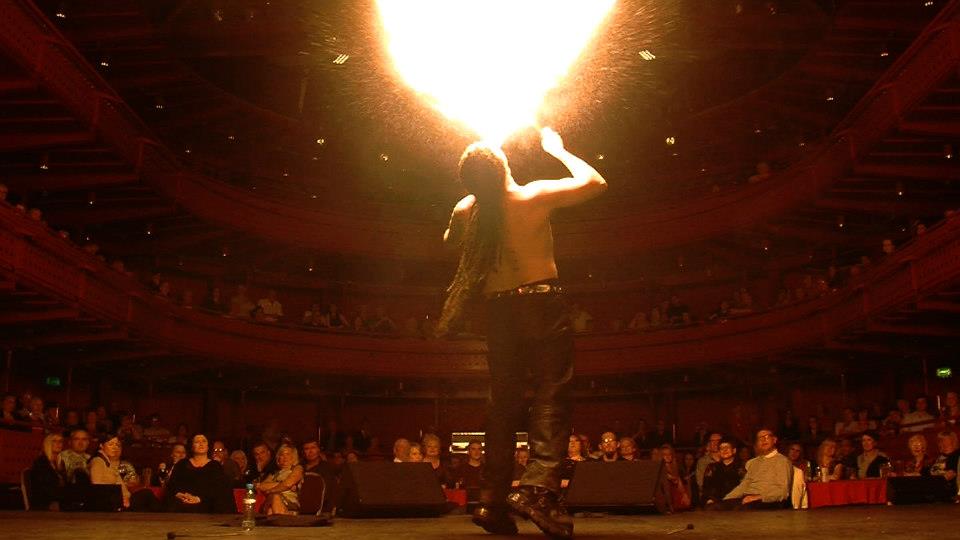 Sideshow artist Preacher Muad’dib is a safety adviser to the HSE, local councils and insurance companies

Last November, an angle-grinding performer set fire to the ceiling of a stage area at Basildon’s Liquid and Envy club. Over 1,000 patrons were evacuated, with one man suffering burns on his arms. British licensing laws go to great lengths to prevent accidents like that to happen, but the majority of venues, producers and artists in London variety violate those laws regularly, according to sideshow performer Preacher Muad’dib.

“Most of the energy released by angle-grinding sparks is light, but occasional chunks are white-hot. That’s hotter than fire,” says Muad’dib. “They can set fire to many easily ignitable things on a person. Hairspray is the biggest risk, but also cologne and lace.” Muad’dib is known for holding multiple Guinness World Records on account of his fire-breathing stunts, but his involvement with the entertainment industry goes beyond performance. As a teacher, he’s trained Snake Fervor, Aurora Galore, Dolores Delight and other established UK artists. He’s also a qualified fire marshal and first-aider, licensed by the Security Industry Authority.

In 2012, Muad’dib and burlesque artist Red Sarah started Cabaret Solutions, a consultancy company specialising in safety assessment for venues and performers. The company recently surveyed 30 London clubs to see if they had staff to assess performers’ safety, hired only insured artists and kept adequate health and safety paperwork. None of them passed the test, and all are in serious breach of their entertainment licence. A similar survey of artists, including fire performers and other strands of variety, had a failure rate exceeding 90 percent.

One of the areas of expertise that Muad’dib regularly advises on is insurance. Public Liability Insurance is just one of many kinds of policies available to variety professionals, and elementary misconceptions about it are widespread in the industry. A commonly ignored fact is that most insurance policies do not cover artists who have consumed alcohol before going onstage. Should damages, criminal charges or any other liabilities arise in that situation, performers would be left to foot the bill on their own.

Another common misconception is that health and safety regulations only concern fire acts. British legislation differentiates between three kinds of performer: sexual performers (strippers, in practice), hypnotists and others. That means singers, burlesque dancers, shadow puppeteers and ukulele players are subject to the same health and safety requirements as angle grinders and aerialists.

“The majority of UK incidents in 2012 were related to burlesque and podium dancers,” says Muad’dib, alert to the risks inherent in every public performance. “Earlier this year, a ventriloquist in Newcastle tripped on his shoelaces, fell off the stage and dropped a large wooden dummy on an audience member, crushing his hand.”

According to Muad’dib, legal health and safety requirements as monitored by council authorities are simple: if all artists in a show are insured, have their paperwork in order and the venue has someone in their staff to make sure performances are safe, accidents will be unlikely and all liabilities will be accounted for. Whether individual artists can be insured, or perform in ways that do not void their insurance policies, is of course another matter entirely.