The “twisted” night of Chaz Royal’s burlesque festival is an institution in its own right. Forewarning is foretasting – the knowing audience laps up the weirdness like breast milk (ew, strike that). From the minute host Benjamin Louche opens with an eerie singing number (some Cramps B-side or other) to the stage kittens’ final sweeping of glitter, bodily fluids and food off the stage, good taste makes way for a bill of shameless guilty pleasures.

Yes, food. Edinburgh performer Lottie Kixx deploys a literal smorgasbord of foodstuffs in a strip-cum-splosh routine too wrong not to stare at. She goes on to enjoy improprieties with a pineapple and a pig head, which doesn’t seem that weird against the electro-tango backdrop of Grace Jones’s Strange. Not to be outdone, burlesquer V.J. Spankie turns David Bowie’s androgyny into hermaphroditism with a drag king parody of Labyrinth that’s pure deadpan cheek. Hard to decide whether to look at the Goblin King’s wig or his pack, though. 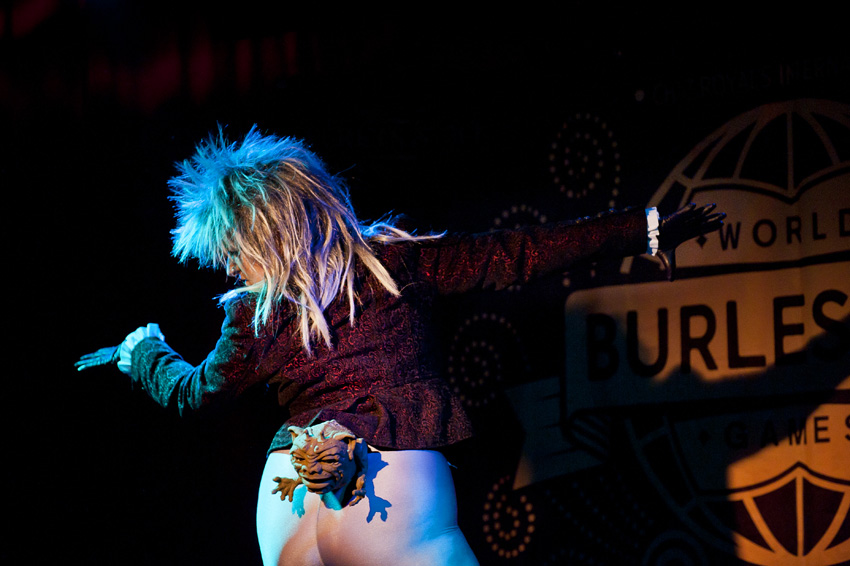 V.J. Spankie works her dance magic with a drag king parody of David Bowie in Labyrinth

Twisted Crown did feature a couple of erudite moments. Bettina Spankenhaus fights the fondling advances of the Phantom of the Opera in an elegant puppet act, beautifully choreographed to All I Ask of You. Later, a lithe Harlequin breathes fires in a zestful, exuberant dance full of élan, courtesy of Swiss vaudevillian Zora Vipera. Classy stuff that would compliment any cabaret show.

But that’s not what you buy a Twisted Crown ticket for, is it?

No audience is too jaded to gasp, laugh and moan at the torrent of abuse that the Monsters of Schlock hurl at each other. The sideshow fiends sledgehammer cinder blocks on each other’s crotches, lock their limbs in coyote traps and take turns in a range of painful stunts during a side-splitting skit of laddish comedy. It’s delightfully demented fun. Think of them as the Beavis and Butthead of variety (but Canadian).

A tough number to follow, but there’s little that could prepare you for Big Chief Random Chaos’s series of extravagant antics. There’s interpretive dance. There’s nipple-touching. There’s popcorn. And there’s one very scared audience member sitting onstage. What else to expect from a lunatic who sets his hair on fire every time he performs? You don’t just put the Chief on in your show – you unleash him. 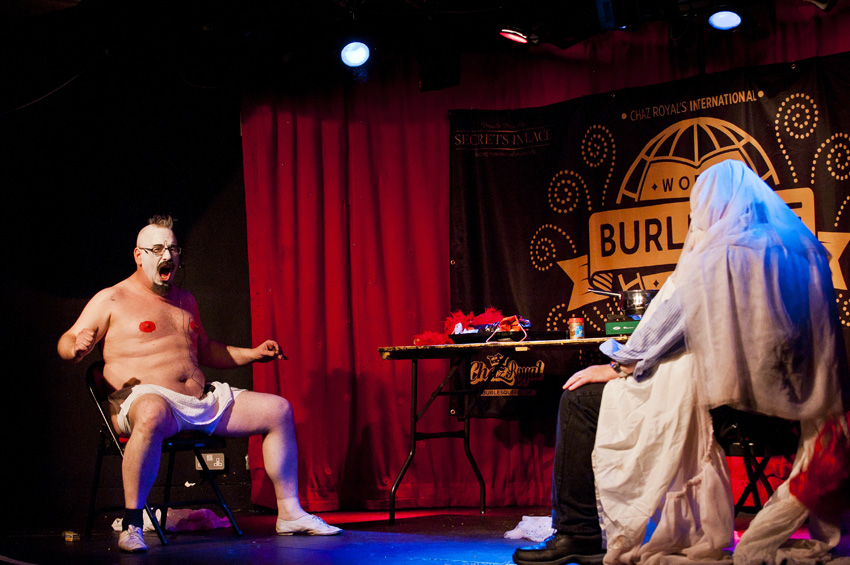 More than a competition, the Twisted Crown, like the usual Twisted Cabaret showcase from previous editions of London Burlesque Week, is cabaret gone meshuggah. Maybe the Olympic Games are, like Louche says, just “running and jumping”. What this is, I don’t know. But that’s probably what makes it so exciting.