Part of CircusFest, Professor Vanessa’s Wondershow fills the main space at the Roundhouse with a heartfelt homage to the British fairgrounds of the 1930s, 40s and 50s. Developed by Dr. Vanessa Toulmin, director of the National Fairground Archive at the University of Sheffield, the show’s mix of acrobatics and sideshow illusions are as close as you can get to stepping into the sensational world of the vintage travelling circus. 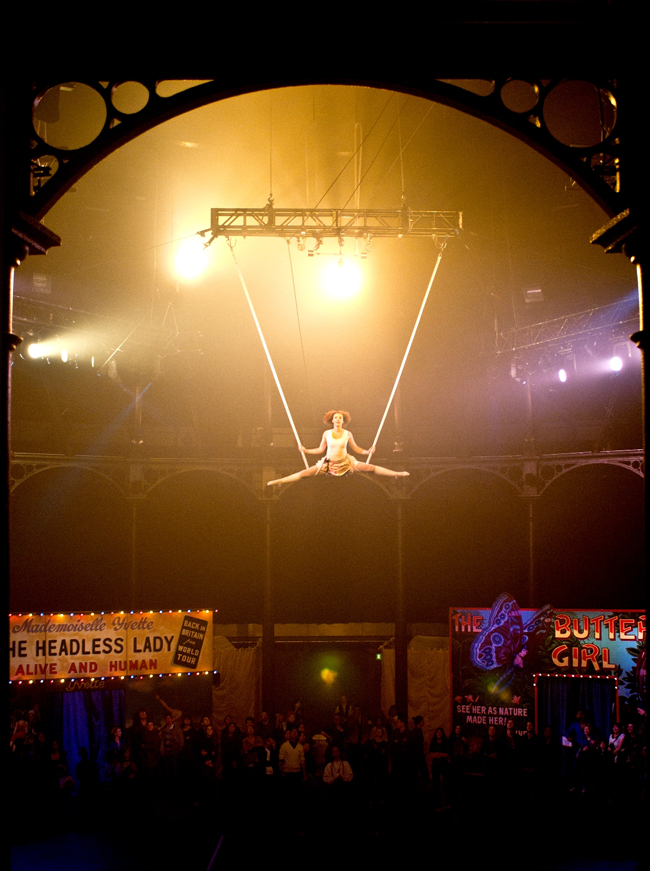 Short of time travel (or a ticket to Blackpool, where Toulmin serves as creative director for annual variety festival Showzam, featuring many of Wondershow’s attractions), this is the real deal. The sideshow acts are all reconstructions of Jon Gresham’s fairground illusions from the 1950s, housed in tents with the original garish signs that adorned them back in the day, restored to their former colourful glory by stage magician and impresario Jon Marshall and his company, Sideshow Illusions.

Five “parades” take place during the evening, when the jugglers and acrobats of The Insect Circus march through the public to perform athletic stunts at the central stage surrounded by the tents. Despite the amusing antics of performers dressed like ants or cockroaches and hula hoop exploits by Marawa the Amazing and Pippa the Ripper, the parades are uneven and repetitive. Likewise, the occasional ringmaster banter contributed by mistress of ceremonies Miss Behave to keep the crowd focused is bland and predictable, largely lacking the edgy comedy she dispenses so liberally with her sword-swallowing act and cabaret compèring stints. The evening’s euphoria peaks with the spectacular showmanship of Lyndall Merry, in a trapeze number brimming with elegant agility and swaggering panache.

Jon Marshall’s sideshow illusions steal the show with the fresh appeal of their tongue-in-cheek candidness. In these times of anaesthetised, politically-correct entertainment, who can resist the lurid lure of Mademoiselle Yvette the Headless Lady (“Alive and Human!”) or the Butterfly Girl? “£1,000 if not alive!” 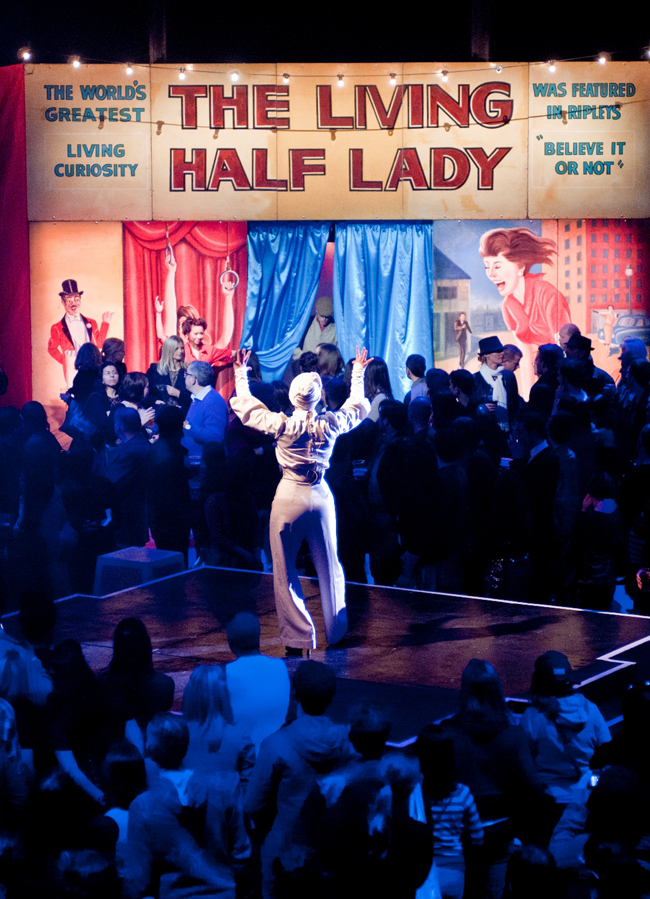 Rather than actual handicapped actors, the sideshows are meticulous contraptions of smoke and mirrors enhanced by the stagecraft of three performers: the “freak” on display; the announcer who explains, rather dramatically, the amazing circumstances behind the exhibit; and the barkers who stand outside the tents, yelling at passers-by to convince them that their attraction is the best. The barkers also control admission – it’s all included in the ticket price, but the small tents can only hold about 30 people at a time. For two shows boasting a particularly engaging chemistry between actors, audience and illusion, don’t miss the Half-Lady and the Mummy. The latter tends to attract long lines, too.

Which is something to bear in mind when attending the show: lasting roughly two hours, the show is tightly packed with attractions. By their own admission, “it is impossible to see them all”. I, for one, missed The Kingdom of Shadows, a mix of film projection and performance created by Mark Whitelaw (of cabaret collective Duckie) from original British variety footage from the turn of the 20th century. My advice? Leave Cleo the Girl in the Goldfish Bowl and Electra the 27,000-Volt Girl for the end. The genuine vintage pinball machines (operated with genuine old coins that you can borrow from the barkers) are definitely worth a go or two, but be careful not to spend too much time on them.

Selling out its seven-day run before the first night, Professor Vanessa’s Wondershow is an undisputed success. For all the double-entendres and old-fashioned chauvinistic humour, it’s perfectly innocent, family-friendly entertainment, done in harmless jest. But above all else it is an authentic demonstration of a fascinating tradition in the performing arts that, though seemingly obsolete, still brings curious smiles and unguarded laughter to faces of every age. For that alone, it is unmissable.