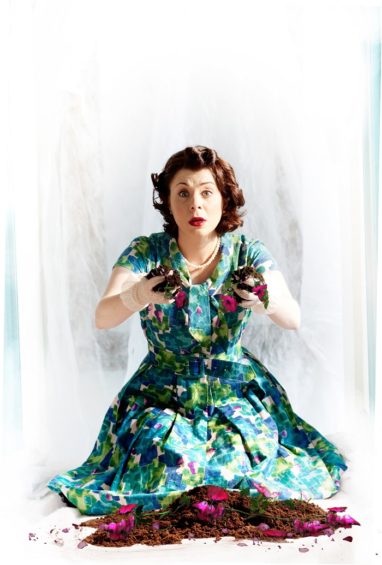 It’s your everyday tale of suburban mundane goes suburban insane in this short but stylistically inventive musical comedy from Spatfeather Theatre at Jacksons Lane. The Liberation of Colette Simple might not quite have the substance to match its more outlandish cosmetic quirks, but its humour and playful tone keeps it light, bright, and, coincidentally or not, pretty simple.

The entire cast of characters in Liberation is played by just two actors, Nathalie Carrington as primarily Colette, and Gary Tushaw, who plays amongst others, a power mad policeman, a pernickety old woman (complete with bonnet and strap around bosomed dress) and…a talking, opinionated canary. Costume changes between each character happen visibly on stage, creating a farcical atmosphere that’s only continued as Colette steps outside the front door of her neat, pink store to discover (using a delightfully unexpected drop of grass cuttings from the ceiling) that someone has wrecked havoc on her petunias. And, like the predictable turning of a cog in a Stepford Wife, that’s all it takes for our protagonist to suddenly go quite off the rails.

Adapted from the one act Tennessee Williams’ play The Case of the Crushed Petunias, Liberation builds upon this short but surreal piece of quaint madness by threading musical numbers in-between the mirth.  In an intriguing twist there isn’t one single lyricist for the entire play – instead the work is shared between eight different composers of various backgrounds – from cabaret king Desmond O’Connor to spoken word artist Charlie Dupré. It’s a shame then that the songs themselves generally don’t feel like more than just a springboard for a wacky character’s humorous personality before we’re launched into a different platform for a different character. There’s few ditties that you’ll fully remember once you’re sauntering out to Highgate – the policeman’s “Town Anthem” stands out for its satirical edge, but most of the rest is nearly indistinguishable, especially surprising given the fact that they’ve been written by eight supposedly distinct composers.

And yet, even given the generally average song list, it’s hard not to like the brash preposterousness of Liberation. James Cotterill’s set is a treat, gradually falling apart as Colette’s world of ordered petunia rows disintegrates, and both Tushaw and Carrington cope well with the frenzied pace with the former in particular morphing from one insane caricature to the next with hilarious aplomb. Once you look past the loud, brash excitement of delirium that infects the musical you won’t find very much else to reflect on, but then, in a musical about an American woman with a talking canary who freaks out over some dead flowers, that’s probably for the best.

The Liberation of Colette Simple continues at Jacksons Lane until 4 October. For more information, see the Jacksons Lane website.