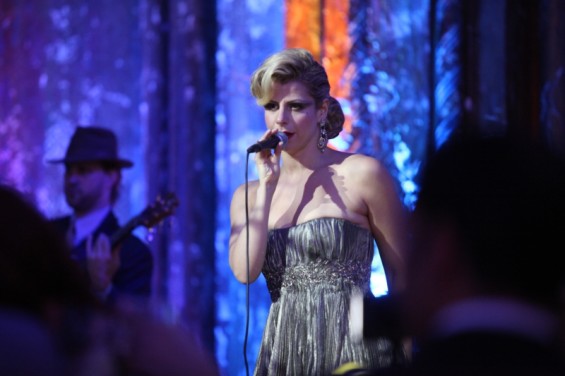 Lady Rizo will be at the Soho Theatre until 20 September.

Lady Rizo is blowing into the Soho Theatre again from this week after another successful run at the Edinburgh Fringe. The singer from the Big Apple earned her first visit to the Dean Street venue as part of her prize for winning the inaugural TO&ST award in 2012, back when Time Out gave an audible hoot about cabaret. Oh, how things change.

One thing that has remained absolute, though, is Rizo’s act. Thank the Lord. No-one with any sense of self-preservation tells a pizzaiolo to swap out the dough, tomato sauce and mozzarella for something more edible and similarly there’s no reason why New York’s finest should change her particular blend of torch song, biographical comedy and audience abuse, sorry, interaction.

Rizo has the last part down pat. She adeptly moves through the crowd, stroking a head here, sitting on a lap there and becoming everyone’s new best friend in minutes. Through her monologues, we vicariously venture to Alaska and hear of her affairs of the heart and other bodily parts. Whatever Amelia Zirin-Brown is like in the bedroom, her alter ego is certainly good, giving and game, donating hair accessories to a bald man before glugging down some his friend’s white wine. If we get to Heaven’s gate, we rather hope she’s there to hold our hand while St Peter investigates the inevitable asterisks.

Her song choices are, as ever, inconsequential. She could belt out a Microsoft EULA and it would still be an entrancing treat. Backed by musical director Yair Evnine on cello and guitar, her incredible vocal talent is by turns beguiling, forceful and lighthearted. Her mash-up of D’Angelo’s Shit, Damn, Motherfucker and Cher’s Bang Bang (My Baby Shot Me Down) is a superb slice of kick-ass choreography, a pas de deux between two songs written decades apart but pulling deep from the same emotional well. Her torch songs caress the heart and evoke Arcade Fire sans the indie whining while her coquettish coda of Que Sera Sera is the perfect mental palette cleanser before she kicks us out into the night.

Lady Rizo continues at the Soho Theatre until 20 September. Read our interview with her here.