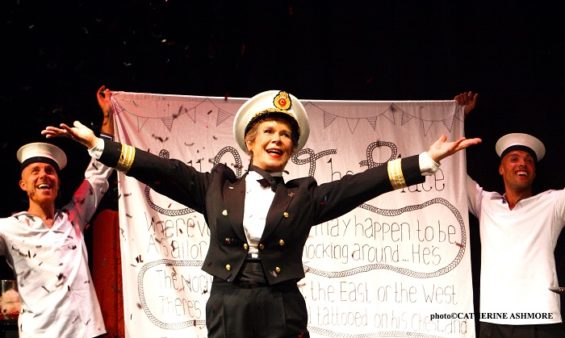 There’s nothing new or startling about Celia Imrie’s one woman cabaret Laughing Matters at the St. James Studio, but that doesn’t seem to matter because it’s Celia Imrie. Even when the vocals are strained and the song choices a little predictable, she still manages to carry off an enjoyable romp by her sheer stage presence alone. It’s a mighty advantage that, in the hands of a much lesser known actor, could have left the night feeling flat. It does beg the question, though, as to why, with her star still burning so bright, Imrie has felt the need to continue with her revue at all.

But continue, from her first run at the Crazy Coqs in September, Imrie does. From Noël Coward’s There Are Bad Times Around The Corner to sketches about the increasing difficulties of introducing Yma Sumac on first name terms at a party where the guests include Ugo Betti and Oona O’Neill, there’s little chance of not being able to find something to laugh at, as Imrie winks and shrugs along with the best of them. Inbetween songs we hear anecdotal snippets from her best-selling autobiography The Happy Hoofer – including how she got her part in the film The Exotic Marigold Hotel, and even a little nod to her “memorable” performance as a fighter pilot in Star Wars: The Phantom Menace, a role which lasts all of a few seconds on the screen.

The atmosphere is one of meeting an old friend for the first time in yearsand being  a few drinks into the night. Although there are occasional slip ups, you feel you can forgive Imrie because of her mischievous and loveable persona. It is because of this that it can feel as if the actor isn’t particularly stretching herself at times. The show does feel pretty safe – the silly yet ultimately a bit naff costumes highlighting that, for Imrie at least, this is all a bit of fun, a nice change of pace, but nothing really monumental.

There’s nothing inherently wrong with this but, when singing is clearly not Imrie’s strongest point, it seems strange to base a show around a cabaret performance unless it’s just to let her hair down for a few days. It is certainly reminiscent of the Monty Python reunion just a few weeks ago, where John Cleese, Michael Palin et al were clearly enjoying being allowed to simply mess around and have fun again – whether or not they were actually adding anything new or particularly funny to their old repertoire didn’t matter to them, or, judging by the laughs, to the audience.

And there are certainly laughs to be had due to Celia Imrie’s comedic performances. She doesn’t necessarily achieve her aim of showing us why laughing matters, because there isn’t necessarily an aim or real narrative in her show except to have a bit of a giggle. Imrie has shown that she can definitely push herself harder than this but if you’re happy to see her simply having fun and join in yourself, then there couldn’t be a better night to do it.