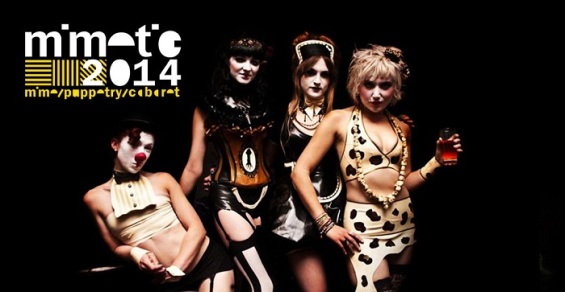 The Familia De La Noche crew are one of the attractions at this year’s Mimetic Festival.

Award-winning producers Finger in the Pie are back for a third year with their Mimetic Festival, a two week celebration of devised, physical and visual theatre, puppetry and cabaret. The festival makes its mission statement very clear: “to become the hub for emerging European theatre making in the UK”. For those who love to twiddle their beret to Berkoff, warble to a bit of sing-a-long cabaret or just enjoy a bit of stripy black ‘n’ white jumper action, The Mimetic Festival promises to cover all ground. And presumably, smash all of these stereotypes out of their stagnant waters.

The whole festival is being held in Waterloo this year at The Vaults in Leake Street, and the programme promises to deliver a wealth of cutting edge live entertainment.

Speaking of which, in the cabaret room burlesque and drag provocateur Rubyyy Jones, recently featured in London Live’s The Drag Queens of London, is presenting a revue which will encourage you to embrace your own inner Rubyyy Jones. For those who have given up keeping up with the Joneses, this is your golden opportunity to became one of the finest around.

Mimetic are also hosting Tricity Vogue and her ukelele with her show, Songs for Swinging Ukeleles. Marcus Reeves steps away from the interviewing couch to bringing his spangly face and performing pieces from his debut album, The Masquerade Macabre. Plus there’s The Naked Stand-Up from Miss Glory Pearl, one of the hits of this year’s Edinburgh Fringe.  Her one-woman comedy promises to be an amusing look about the way we look at our bodies. And, simultaneously, hers.

Charmingly filthy puppets Boris & Sergey bring their helpers from Flabbergast Theatre to create an hour of bunraku pleasure. Other festival performers will be helping out as the odd, and possibly slightly more normal, audience members. If you need a bit of magic in your life then Cabaret Roulette tricksters Griffin and Jones can help, with their show Fooling Themselves.

Burlexe/Boylexe, the innovative show that introduces spoken word and the history of burlesque alongside live performances, is going to fit in well at the festival, and Lady Celeste, the Australian diva, is performing some of her “theatrical” songs as well as her own versions of current pop songs by the likes of Destiny’s Child and The Spice Girls.

The Mimetic Festival will also be running a late-night festival bar featuring cabaret performances and club nights throughout various theatre and cabaret spaces, so if you’re into your after hours cabaret this will be worth checking out.

For a full line-up and ways to grab yourself tickets to any of these events, and more, check out the Mimetic Festival 2014 website. And, while you’re clicking away, the Vaults website is also worth a gander.