The move from stage to screen is common in theatre. In cabaret, it’s a much rarer beast. After starring in two brilliant short online videos this year, London burlesquer Kiki Kaboom made her feature film debut in Canadian director Jonathan Joffe’s Burlesque Assassins. Franco Milazzo speaks to the award-winning bombshell ahead of the film’s UK premiere on December 9th. 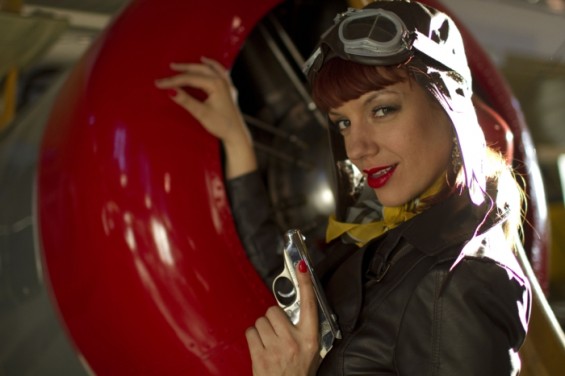 This is not your first experience with acting, is it?

I trained as an actor and did some film and TV work years ago, but back then I was quite self-conscious in front of a camera. A lot of young actors can be like that. I always felt I was too big or too small. It was nice to come back to acting after some time exploring other areas of performance. I was a lot more relaxed this time around.

What were the best and worst parts of the filming process?

The repetitive nature of filming is both a blessing and a curse. You get to go again and again until you nail it, but sometimes you start to censor yourself the more you repeat the take and potentially lose the electricity that you have with a live performance. The absolute worst part is the early starts. No matter what I was filming, they were a killer. I am not a lady made for 6 AM alarms.

Tell me about the two videos.

The first one, The Kiki Kaboom Show, came together very naturally and very quickly. In fact, we filmed it all in a day. I wrote it, then Frisky (of Frisky and Mannish) came in and suggested some amendments. From there it was all pretty straightforward.

The parody of The Artist, on the other hand, was a more deliberate affair. I worked with Michel Dierickx, whose camera and cinematography skills are second to none. We wanted this one to look beautiful, so we took our time. There was more preparation, and we shot it over two days.

Rumour has it you did your own stunts in Burlesque Assassins. How did that go?

During the final scene, my character Bombshell Belle fights a bunch of henchmen after jumping over a barrier to fetch an item she had thrown away (you’ll have to watch the film to find out what it is). As written in the script, this is all done while wearing a dress, corset and high heels. I practiced the stunt without heels, and it was fine. When the cameras rolled, I went at it with my usual enthusiasm and vaulted the barrier so high that I caught my heels together landed with this almighty thud. The entire set came to a standstill – actor injuries are a logistical nightmare for low-budget indies. I stood up quickly, trying to style it out, but I was really bruised (and that’s just my ego). You’ve got to commit, right? Go big or go home!

You’ve just premiered Booze, Blues and Complete Country, a new cabaret show with musical director Pete Saunders. How did that come about?

One of my favourite performers, Anna Fur Laxis, was once asked to describe herself in three words, to which she said “never stand still”. It’s something that I admire about her, and something I’m trying to do with this show. I bumped into Pete Saunders outside Madame Jojo’s after the last Bête Noire. He had enjoyed very much the first Kiki Kaboom Show video – he calls it “the burlesque version of Spinal Tap” – and wanted to work with me.

Over the next few months we threw around some ideas. I wanted to use my burlesque persona, but didn’t want to do burlesque routines as such. The challenge for me was to do 60-90 minutes of material without a bazillion changes, without the striptease, justifying my place onstage purely with singing, interactive cabaret. To approach it that way is terrifying for me, and funnily enough, a lot more exposing.

My partnership with Pete is new and it is going to be just us two in an incredibly intimate space, with nowhere to hide. We’re doing chiefly covers, but none that I have performed before. While some of the repertoire is at least intended to be funny, a couple of beautiful songs are a bit slower, or new twists on well-known tunes. I’m confident that the audience will never have heard quite a few of the songs we’re performing, and it’s exciting to bring that to the stage.

I’m looking forward to spontaneously adapting the show over the course of the evening. The beauty of cabaret is to have that basic premise in place and be able to change it on the spur of the moment. There will be audience interaction, but I have no idea what form it will take. You’ve got to save something for the night.

Are you considering other screen projects?

My dream would be to do my own comedy sketch show. I don’t know if I would do it as Kiki Kaboom or under my real name. Kiki is well known and has always had a number of characters but, as a performer, I’m Rosalind Porter and “Kiki” is one part of me. Then again, Kiki is just an exaggerated version of Roz. If anyone reading this wants to give me my own comedy pilot, I’m all ears.

Kiki Kaboom and Pete Saunders’s free cabaret show Booze, Blues and Complete Country returns for a monthly residency at Cellar Door on January 23rd, 2013. Keep an eye on www.kikikaboom.co.uk for other dates and details.