The annual Meltdown Festival at the Southbank Centre has consistently attracted the most electic of acts from around the world. Past curators including Nick Cave, David Bowie and Jarvis Cocker have persuaded long-dissipated bands to reform, given boosted relative unknown bands into the stratosphere and brought foreign entertainment dignatories to the attention of an eager London audience.

This year, Mercury Prize-winning curator Antony Hegarty has invited Vaginal Davis and her new artband Tenderloin  to perform. Davis hails from the US and is one cabaret’s true polymaths, as well known for her writing as she is for her performance art, singing, DJing and film-making. 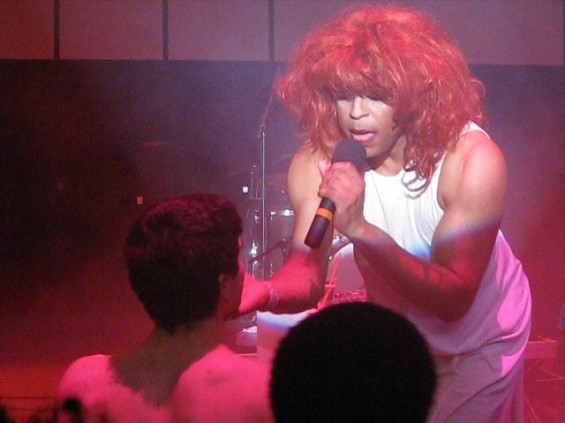 Vaginal Davis will be playing with her band Tenderloin tomorrow night.

You live in Berlin, London isn’t so far. Will we see more of you once Meltdown is over?

I adore London, but its a boutique city like New York and Paris, designed only for the rich. After my performance I have to rush back to Berlin to begin prep for my big visual art solo show that will open Nov 4th at Participant Inc., the not-for profit gallery in Lower Manhattan.  I also curate a monthly performative film event Rising Stars, Falling Stars – We Must Have Music at Berlin´s Arsenal Institüt für film und video kunst so I can never stray too far from my adopted city.

Tell us about the latest show. How has it evolved from your work a decade ago?

Tenderloin is actually a continuation of work that I did in the 1980s and 1990s with concept bands The Afro Sisters, Cholita the female Menudo, black fag and Pedro, Muriel & Esther.   All my music projects go in and out of hiatus. Tenderloin is now over two years old but it is still mutating and developing and I feel fortunate to work with such talented musicians as Joel Gibb, Langraf Jan Klesse and Felix Knoke.

Do you feel skin colour an issue in cabaret? We see very few non-white performers breaking through here.

When I hosted my famed speakeasy Bricktops at the Parlour Club in Hollywood I was lucky to have a range of artists of colour to choose from like male burlesque star Rocky Roulette who does a striptease on a pogo stick and Reny Monk who is related to jazz great Thelonious Monk and does a delicious tribute to Josephine Baker.

You’ve said The Revolution Is My Boyfriend. Name names: come the revolution, who would be first up against the wall?

I’m trying desperately not to date myself too much here but the actual quote that I gave back in the early 1980s was “art is my boyfriend”. I was more interested in creating art and new political movements every 15 minutes as opposed to the Warholian phrase of “everyone will be famous for 15 minutes”.

Through the great Canadian feminist musician and artist GB Jones that statement was reinterpreted by the Hidden Cameras’ Joel Gibb as “music is my boyfriend” ten years ago in Toronto and then filmmaker Bruce LaBruce co-opted it as “the revolution is my boyfriend” for his 2004 film The Raspberry Reich.  I stole it back for the Trespass Parade fundraiser for West of Rome Public Art Agency in Los Angeles in 2011.

I am not at liberty to name the guilty.  Let’s just say I am a modern day Madame DeFarge quietly knitting a design pattern with the names of mine enemies. Unlike Madame Mao who patiently waited 50 years to destroy those who did her wrong, the upcoming revolution is just around the top shop high street corner.
How would you characterise the cabaret scene in Berlin? Do you have any favourite venues, shows or performers?

I really don´t know that much about about Berlin’s cabaret scene.  I´ve been told that there is an upscale cabaret/variety scene that is pretty mainstream, oom pa pa and flat.  The Weissensee Art Academy invited me to do a block seminar a few years ago and one of my students from that time, a gender queer that goes by the name of Katja von Hellendorf, has a music/art project called LeiseyLento that I adore.  In Berlin, I am a complete workaholic and hardly ever go out as I appreciate a good night’s sleep, and Berlin is a pure octane party town.  Once in a randy blue moon, I will go to Gayhana-Salon Oriental that plays middle eastern dance music with belly dancers.

You “cheerfully embarassed” Gwyneth Paltrow with an onstage snog back in 1998. Who would you like to snog next?

I´d love to pounce on that doe-eyed Mike Skinner of The Streets or cute twee rhubarb boy Owen Jones who wrote that book on Chavs, Chavettes and Chavestites.

What does cabaret mean to you? And has that meaning changed since Vaginal Davis first stepped onto a stage?

Because I got my start performing in clubs, and later hosted and DJed some fun performance parties in bars and pubs in my birthtown of Los Angeles, I am thought of as a cabaret performer, but I´m not. I think because of your British music hall tradition, cabaret in England is defined differently than what we view it as in the United States.

Vaginal Davis can be see with Tenderloin tomorrow (Friday) evening at the Southbank Centre. More information can be found on the official Meltdown website.

For a taster of what to expect, see below.