Gareth Joyner: “My Panto Cast Has A Very Particular Set of Skills”

Both in the guise of his award-winning alter ego Myra DuBois and as a writer, director and actor, Gareth Joyner has made an indelible mark on London’s cabaret scene. His acid-tongued drag queen’s bon mots may be pitiless and cutting but, truly, many of those on the receiving end wear her scorn as a badge of honour.

As Myra, Joyner was recognised last year with a London Cabaret Award for Best Drag Act and this Christmas will be rolling out his third panto: Alezzin begins its stint at The Brewers from 3 December and features la DuBois alongside Harry Clayton-Wright as Willy Fook and Sooz Kempner in the title role. Deep in rehearsals, Gareth spoke to us about his latest project.

As director, writer and co-producer of Alezzin, for this production you’ve worn more hats than Patsy Kensit’s mum. Tell us a bit about how the show came together.

After a few years of writing solo shows and material for Myra DuBois, in 2012 I was asked to write an adult panto for the Royal Vauxhall Tavern that she was appearing in. I thought “Why not?”, gave it a go and had an absolute blast. There’s something about accessing your inner child and tapping into those ingrained panto traditions that really works well after you’ve had a few pints! I’ve written an adult panto for a pub every year ever since.

This is my first year directing and producing though. It’s also the first show to be put on by my own little production company That’s Good That Is, co-founded with my mate Richard Thurston. Our motto is “forward thinking old school cabaret and comedy”, which reflects the sort of shows we’re interested in making. You might be hearing a little more from That’s Good That Is in 2016!

There’s going to be a fair few adult pantos around this year. What makes yours special?

Rather than cast our show by auditioning actors I’ve invited cabaret and comedy acts I’ve worked with to be involved, so it has more of a cabaret feel. Everyone in our cast is totally at ease with a lively crowd and that’s important to me. I want my cast to be able to connect with the room and give the audience a show that is absolutely in the moment, that couldn’t be recreated performance after performance. And, to paraphrase Liam Neeson, my cast has a very particular set of skills. From comedians to belting singers, everyone brings something to the table! It’s a very strong cast.

Alezzin opens on 3 December at The Two Brewers.

Some people in the audience may recognise Harry Clayton-Wright from his appearances on Miss Behave’s Game Show. What can you tell us about his role in Alezzin?

Harry’s got such a great energy. He’s a naturally funny person and his background, coming from Blackpool and being surrounded by an end-of-the-pier style of entertainment from a young age, feeds brilliantly into the panto form. He’s playing the role of Willy Fook, the idle son of Widow Twank’Stain (Myra DuBois) and brother to Alezzin (Sooz Kempner). He’s the comic sidekick of the whole thing, and it’s his job to build a rapport up with the audience who take on the role of Willy’s Squad. This is the third that I’ve written for him and, as is now tradition with Harry in adult panto, he gets his arse out.

Did you see any pantos as a kid? What do you most remember from them?

I saw them yearly and still do! My first ever theatrical memory was of a panto, I remember Widow Twankey wheeling her laundry on stage; it was a single but very striking visual memory. I loved the breaking of the fourth wall and the direct engaging with the audience which would later feed into my cabaret work. I now make a point of seeing the Hackney Empire’s offering each Christmas. They’re just brilliant, everything you need a panto to be and Clive Rowe makes for a barn-storming dame.

It’s not unusual for pantos to have stars of TV and film. Given a big bag of juicy blackmail material, who would you inveigle to join the cast of Alezzin?

I’m a worshipper at the alter of Ms Bonnie Langford. You can keep your Beyoncé, Bonnie is my Queen B. 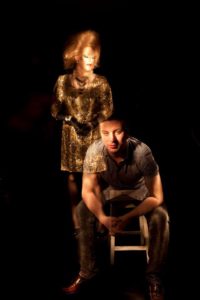 What’s your take on gentrification? Given the number of venues that have popped up or expanded since the closure of Madame Jojo’s this time last year – not least the Glory, Bloc Bar in Camden and the Century Club – would you say there are more or less opportunities for a performer such as yourself?

It’s sad to see old friends such as Madame Jojo’s and The Black Cap close. I still get a little lump in my throat knowing that those venues are no longer with us because those venues were more than just “venues”, they were the backdrops to memories and friendships.

But, as you rightly point out, new saps are rising from the earth and that can only happen whilst there’s a thriving scene of both performers and audiences to keep it going. Whilst there’s a demand for cabaret, there will be cabaret.

Myra DuBois seems to have been around forever and a day and is still on the rise. What’s the secret of her success?

She won’t give it up, will she? I think there’s something about Myra‘s sarcastic realism that appeals to an audience. She’s known for saying what everyone else was thinking and I think people are happy for her to fire those bullets. She’s cutting but never vindictive, and the first person to criticise herself despite a resilient and indestructible self belief in her own questionable talents. These qualities make her the perfect anti-Dame in an adult panto!

Alezzin launches at The Two Brewers on 3 December and keeps on going until 30 December. Ticket information can be found at That’s Good That Is.