FILM REVIEW: This Is Not A Dream

What happens when some of the most creative cabaret artists like Dickie Beau and Vaginal Davis around explore the medium of video? Kate Kelsall investigates. 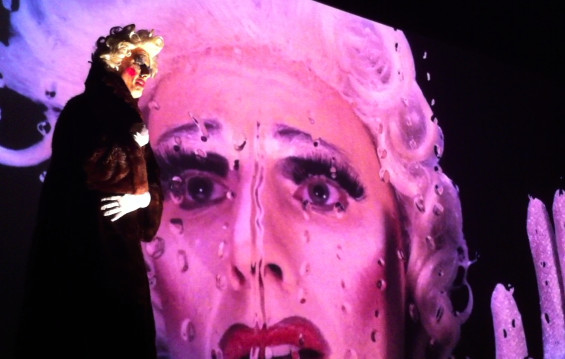 Dickie Beau performing live at one of the recent screenings of This Is Not A Dream.

“Trash is fun, crap is shit on the floor”  – Holestar

DIY documentary This Is Not A Dream (directed by Time Out Cabaret Editor Ben Walters and Goldsmiths professor Gavin Butt) perfectly elucidates the difference between trash culture and the crap that floods mainstream media in a witty and informative history of avant garde artists’ relationship with the moving image.

Being white, middle-class (ish) and pretty “normal” looking, whatever that means, I naively consider Londoners to be open-minded folk.The night after watching This Is Not A Dream, I had a gentle yet eye-opening experience. Travelling back from an arts festival with a fox-eared hat made from tinfoil perched proudly aloft my head, I was astonished at the confusion and even animosity that my marginally kooky headgear garnered. People looked affronted with one guy aggressively enquiring “What the fuck is that about?” and another bloke suggesting that I should take it off. I politely declined.

While it seems publicly acceptable for polished freaks like Lady Gaga to strut their outré selves, when confronted by homespun strangeness, it seems your average Joes are still alarmingly unhappy with manifestations of alternative living and suggestions of wacko fantasy. This Is Not A Dream chronicles the radical and relevant quest of cabaret subculture to infiltrate mainstream consciousness using video, perhaps collectively considered as one of the least risqué forms of expression. Lo-fi and high energy, the film is fuelled by the intoxicating passion of the twelve figures it interviews and documents.

It is a much needed alternative and living history lesson on the moving image, delivered chronologically but anecdotally and thus totally free of didactic certitudes. Its DIY aesthetic lends a feel of freshness, discovery and subversion and the cabaret community come across as open and accessible in the face of prejudice and narrow-mindedness. This is a party we all want in on. As the makers’ first foray into film, it applauds as well as practices an appropriately experimental attitude towards the medium it explores.

Eschewing a purely 2-D experience, the audience to one of these screenings is treated to a live performance from the ever-outstanding Dickie Beau whose onscreen appearance lapses and bleeds into his real-life appearance, uncannily highlighting the comparative immediacy and interdependency of live and recorded art. This Is Not A Dream is tempered by the participants’ refusal to take themselves too seriously all the while discussing work that is truly ground-breaking.

A sense of fun, hilarity and the perversion of expectations permeates fascinating and informed revelations. An all-star cast is opened with video artist Dara Birnbaum exploring legitimate image piracy and joy-riding mainstream iconography, Vaginal Davis acts as joyful reminders of the power of bold flaws and Holestar asserts messy gender definitions on the uninformed public. Video is an open window into a niche and flamboyant scene, a gateway for isolated youths seeking “fellow-freaks” to affiliate themselves with and perhaps most interestingly a mode of creating new worlds. The positivity of Davis’ explanation of how video allowed him to invent a scene of his own, previously seeing himself as “too gay for the punk scene and to punk for the gay scene”.

This audio-visual medium’s flexibility and manipulability finds itself in perfect hands here, with a set of performers and artists who live their belief in malleable and blurred identities. With technology advancing at a terrifying pace, This Is Not A Dream is more than a raucously entertaining and revealing viewing experience in one of the more accessible art media. It is also an edifying and empowering salute to individual imagination and those who influence mainstream culture from the outside in.