Hailing from Québec, Circus Alfonse bring the essence of the lumberjack yard to the Southbank Centre, using all manners of different wooden logs, poles and metal tools to perform a show crammed with lively music, stunning tricks and a strong sense of heritage. 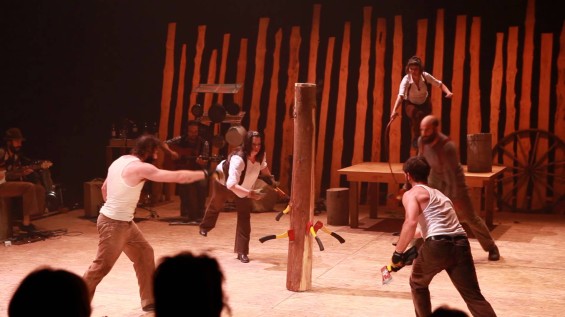 Cirque Alfonse are bringing the idea of family circus firmly to the forefront in their new show, Timber! One standout member of the cast is 66 year old grandfather Alain Carabinier. He might come across the typical papa but there’s definitely plenty of life in the old boy yet, having not run away with his family circus until his sixties. He brings a sweetness to the show with his ramblings and never ending energy. At one point taking to a bungee rope, he is hoisted and bounced around the space above the stage, spun around, and landed right back in his rocking chair.

This show is, in many respects, a family affair, with his two children Antoine and Julie (along with her partner Jonathan) making up half of the cast. They are joined by musicians, some of whom also contribute to axe juggling routines and act as counter weights. The genuine family connection and relationship between the cast is evident as they present an entertaining and fun show for all ages.

The cast mix traditional music and dance, together with a huge variety of circus disciplines to entertain the audience for a 90 minute extravaganza of daring tricks and culture. Highlights include the Russian bar routine, performed by Jonathan on a regular shaven and shaped log. The audience gasp as he, without a thought, drops his legs either side of the pole, sitting astride it in a trick that sees several men in the audience crossing their legs. Jonathan goes on to perform a series of impressive somersaults and twists, supported by two fellow cast members. Some tricks take several tries but it’s the unrelenting determination to perform the final trick without fault that wins him raucous cheers when he finally achieves his goal.

The show has room to improve, with several drop and blunders. However, the content is engaging and entertaining, drawing the audience into this family world of crazy antics and good old fashioned sing songs. The musicians keep the flow of the show smooth and whip the action along. There is never a dull moment, even in the calmer sections. Crammed with laughs, Timber! is definitely a family-friendly show, with some tongue-in-cheek humour for the adults.

The third generation of Cirque Alfonse makes an appearance in the encore as Julie and Jonathan’s two year old son stands upon his fathers outstretched arm with perfect ease. The crowd melts and rightly so, the boy’s cheeky smile is a clear sign he’s destined to follow in his parents’ — and grandparents’ — footsteps.

Would it be a one to watch? Yes… it wood!

Want to hear from  Antoine Carabinier himself? We spoke to him when he got to London: Cirque Alfonse: “Circus is all about believing in what you think is not possible”