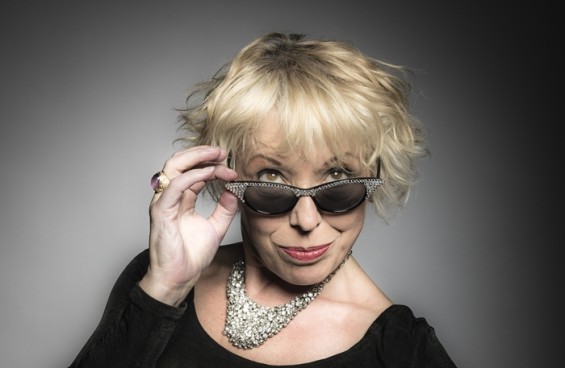 Barb Jungr is a cabaret singer. “If you don’t like it, fuck off.”

Songbook cabaret has expanded hugely in London over the last decade. Fans can now hear their favourite chansons in such diverse surroundings as the basement of a Kings Road pizzaria, in a Leicester Square casino or under a new theatre in Victoria. One of the superstars of the scene is Barb Jungr, the Stockport-born singer who has toured the globe bringing her unique visions of some of her favourite songs.

In a year which saw the first London Cabaret of Festival, a celebration of the American and British songbook, and a debate over the very definition of “cabaret”, she is highly vocal on being a cabaret singer. “I’m owning it at long last!” she says. “If you don’t like it, fuck off. It’s political. It comes from Europe. It rises when the chips are down. The chips are down, look at it rising! When have we needed it more?”

When indeed? At the tail end of a year that has seen her take on Bob Dylan’s classic numbers performed on both sides of the globe and her latest album get rave reviews, we asked her to reflect on her recent work.

Your latest show Mad About the Boy – And No Regrets shines a light on love and loss. Do you feel your song choices on this subject have altered with experience?

Oh absolutely. Refining repertoire is always in sync with life. I have been singing both No Regrets songs for some time; I loved the Tom Rush version and, of course the Piaf is on my Chansons album on Linn Records, which has always been one of my biggest selling albums after those focussed on Bob Dylan. But even when you take songs you’ve sung for a while, by juxtaposing them with other songs, a new narrative emerges. I really enjoy the surprise of that.

Interesting! Where has that kind of thing happened?

Well, you create a collection – for example The Men I Love, and then you take that song Springsteen’s The River and put it into a collection where suddenly all the songs are about rivers, and its suddenly a new song where the new connotations reveal new things about the original song. It goes from being a love song to something with a different resonance.

I took With God On Our Side out of the anti-war collection where it serves to make the point of the whole show and now use it as the encore on the recent Dylan collection, where it serves to show how much Dylan contributed to political debate through lyrical genius. The songs reveal new things in their new positions and new sets.

You’re renowned for your unique reinterpretations of songs. Would you describe your approach to covering a song as cerebral and studied or is it more of an emotional response?

Its entirely emotional to begin with, or I’d probably prefer to say, intuitive. But as soon as you start working, then its about tempo and chords and keys, and flavours, and of course thats cerebral.

With the opening of 54 Below in New York and numerous new spaces around London, it seems clear that songbook-based cabaret is on the rise in both cities.

Well, that’s a fascinating point. I wonder if songbook-based cabaret is actually on the rise.

Nonetheless, I was making a point about repertoire and that’s certainly exploded both sides of the Atlantic.

Talking of our American friends, how would you characterise the similarities and difference between the London and New York scene and audiences?

I love that cabaret itself is expanding and that there are huge new areas like Joe’s Pub in NYC and the East End scene here that are pushing barriers. Thats brilliant. The Royal Vauxhall Tavern has such great work going on there and then there’s Crazy Coqs and St James’s and Soho Theatre and more. We have never had such fabulous venues. I think we’re blossoming.

I think both cities have their share of the traditional and the explosive and both cities have some great venues and audiences. If anything, I’d say the American audience accesses emotion faster, but the British audience is changing and that old reserve is breaking down, bit by bit.

Being on the road must have led to some amusing incidents. Are there any that stick out from your recent travels?

Oh, where would I start? Some time ago, when I was in Jungr and Parker, the dressing room had a huge glass case in it which was home to a bloody massive boa constrictor. The boss man said “oh, I let the snake out for walks on the bowling green in the summer.” Putting on your make-up while being eyed by a massive sleepy snake isn’t the most restful thing in the world.

There were a lot of wild things in Africa and Burma – surprise surprise. But recently, no, its been gorgeous recently. No snakes. No secret police (as we found in Burma). No sand fly bites (Cameroon) or late night police needing bribes (Cameroon and Cote D’Ivoire). In fact, its been lovely.

Your album Every Grain of Sand was critically acclaimed on both sides of the Atlantic. What is it about Bob Dylan that continues to draw you in?

Oh lordie Lord! Well, I am just back from seeing Dylan in Blackpool at the Opera House, and I was blown away by the sheer majesty of the man’s musicality, phrasing, mastery and brilliance. He sang songs we know backwards inside out, new words, new music, new arrangements, new everything. He was mind blowingly wonderful.

If you had Dylan to yourself for a day, what would you do?

I would like to just sit there and let him tell me anything he has – because all of its worth knowing. I’d just like to breathe the same air.

Finally, do you have any professional regrets?

I can hear those lines “regrets, I’ve had a few, but then again, too few to mention. I did what I had to do.” I love that song. Its clearly not true of course. Who hasn’t regrets? I wish I had been smarter sooner. I’m not smart now but if I had been, I wish it had been sooner.

Regrets? Not really. Here we are and here it is and whats the point in the rest? Luckily the yoga’s paid off. All those lessons have been worth every penny!

Jungr’s next CD, Hard Rain, will be available on Kristalyn Records on March 24. For the latest information on this and other records as well as her upcoming shows, check out her website.