Why Are Our Knickers Getting Smaller? 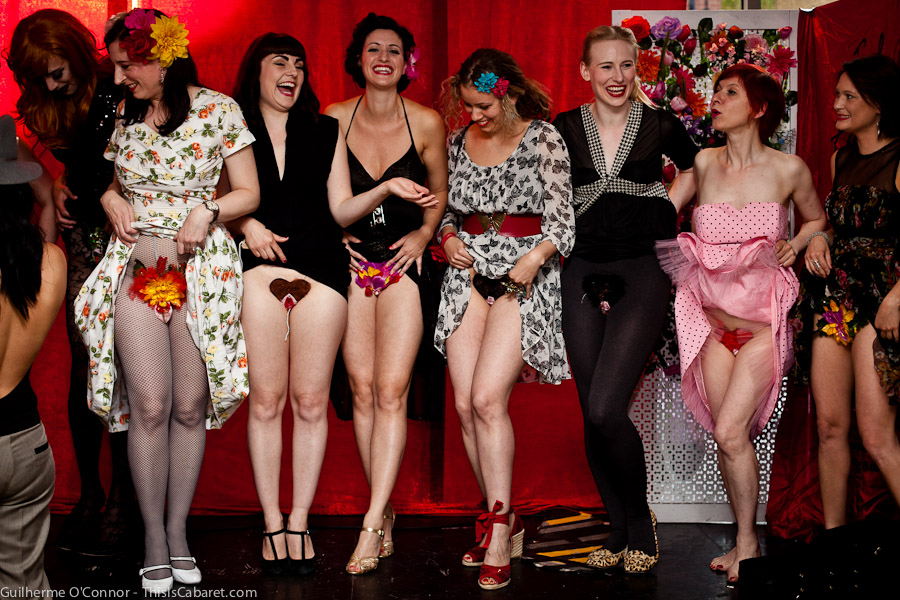 Frilly knickers no longer enjoy the favour they once did among professional bump-and-grinders. Singer and compère Ivy Paige considers the impact of C-strings and merkins in the aesthetics of modern burlesque.

Do you dare to bare? Once upon a time it was all about the big frilly knickers, but they have definitely been getting smaller. I’m not the only one to notice this recent change. It’s been discussed on numerous burlesque forums, so I decided to get to the crux of the matter. Why are they shrinking? Are the stars of burlesque putting them into a boil wash by mistake?

It appears that pants are off and string is in – the C-string, that is. If you’re not acquainted with one, Wikipedia describes it as underwear “as narrow as a G-string, but without the band around the waist, leaving just a C-shaped piece between the legs held in place firmly by a flexible internal frame.”

The science doesn’t stop there. C-strings are part of the string thong family, including the G-string, the V-string and the T-back. Who knew there were so many varieties of dental floss underwear? 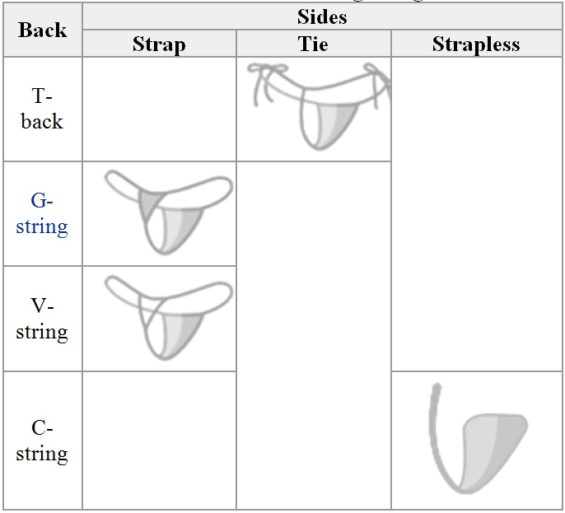 Pasties and a G-string: burlesque strippers get increasingly closer to nudity with newer choices of underwear. Don’t get your knickers in a twist with this handy guide.

Like the centuries-old merkin (a pubic “wig” glued or taped above the female genitals), the C-string pushes the boundaries of the reveal for both the audience and the performer. It acts as a cheeky wink as we draw the spectator’s gaze right to our crystal-clad vaginas. Of course, not all of them are covered in Swarovski crystals. The diversity of these scanty items add a final flourish of creativity, cheek and charm to a striptease.

Diva Hollywood uses a seaweed merkin in her mermaid routine for humour, but also to diffuse overt nudity. “It gets a lot of laughs, as it’s unexpected,” says Hollywood. “I made it even bigger this month, and that has improved the impact: the naughtiness of removing my pants does get worried looks, but then the ridiculousness of the seaweed makes it OK.” However, let’s not beat around the bush: taking off your pants onstage is pretty naughty, and that’s part of the appeal for both audience and performer.

A New Tease for New Times

But is it still the art of the tease if you’re baring more? In West End revue The Hurly Burly Show: Naughty But Nice, arguably the most commercial burlesque event this year, the cast takes the wearing of string to a whole new level. Their bodies are framed by the roped costumes and the exceptional lighting design by Nick Whitehouse. The shadows dress and sit seductively on their bodies: they look more dressed than they actually are. This creates an innovative tease as the audience realises much of what they’re not seeing is not actually covered.

Are we seeing an overall shift in burlesque as we reveal more of ourselves onstage? While compèring a graduation showcase for The Cheek of It burlesque school, I noticed that two newcomers confidently sported C-strings. The audience went wild for them. What is it about the C-string that is making it so popular?

“It brings a sense of excitement and naughtiness,” says Bettsie Bon Bon. “I love the thrill I get from the audience’s reaction and the near-nakedness of it.” Watching Bettsie Bon Bon strip down to a C-string is certainly a glorious release for the whooping and cheering spectators, as it was for the Cheek of It newcomers. Perhaps after all the big frilly pants that came before, it’s liberating for an audience to watch a confident woman reveal so much of herself.

Body Shapes: Who Can Wear a C-String?

So much of burlesque is about self-expression and creativity, regardless of body shape. “C-strings are more popular, but unless you’ve got the body for it, don’t bother,” says London Burlesque Fest producer Chaz Royal. “Sometimes the wiggly-jiggly needs to be contained.” For many performers, though, exposure is a progression in the acceptance of their body, and a C-string may be the final step. Or is it? Rubyyy Jones performed a full-frontal nude reveal at the World Burlesque Games newcomers’ competition.

“It was, honestly, a little fuck you to London Burlesque Week as an establishment. Nothing personal to them, but I have some issue with competitions in burlesque,” says Jones. “It seemed fitting to push my artistic boundaries as far as I could – a little burlesque anarchy, darling. Obviously the reveal is massive, also because I do have a ‘bush’, which is different to see. I choose carefully when to get nude, but I’m more inclined to do it as much as possible because it saves me time and glue. And it also has a big punch finish.”

Increased exposure may be a personal revelation as well as a physical one. Whether it’s Rubyyy Jones’s rebellion, Diva Hollywood’s punch line or Bettsie Bon Bon’s illusion of nakedness, it will continue to push boundaries, titillate, tempt and tease both artists and audience. As media representations of women change, burlesque too must evolve and find new ways to tease the audience. Once just baring your knickers on stage was provocative, but now it harks back to an era of nostalgia.

Are the days of the big frilly pants numbered? I don’t think so, but C-strings and merkins are here to stay. As the new generation of burlesque performers evolve and define the contemporary tease, less is definitely more.

See www.ivypaige.co.uk for upcoming shows and projects by Ivy