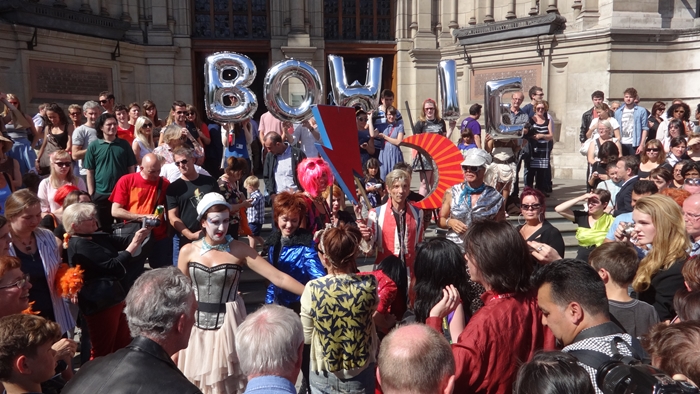 Au revoir, Ziggy! One of the year’s finest exhibition came to an end last week with a spectacular demonstration on the steps of its home, the Victoria & Albert museum. 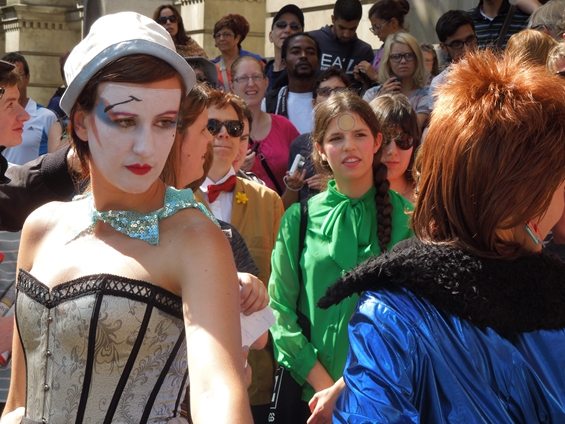 Whatever your opinion of the London-born singer, David Bowie’s impact is undeniable. As a musician, his legacy is still felt across the world. His choice of material often evoked the Weimar cabaret scene either in style or through cover versions of the works of Berthold Brecht and Kurt Weill like his classic Alabama Song.

An exhibition dedicated to the icon, David Bowie Is, has been the best-selling exhibition in the history of the Victoria & Albert Museum. Every day, queues of hundreds of people appeared at dawn each day, snaking around the outside of the gallery waiting and hoping to get in. Last Sunday marked the last day of the exhibition ahead of a world tour and it was fitting that such a successful exhibition was given a flamboyant sendoff with a special event outside the museum.

Occupy Bowie saw a collection of misfits, androgynes, glam rockers, goblin kings, scary monsters and super creeps gather together in all their outrageously costumed, brightly painted and glitter-streaked glory. They created a tableau vivant on the steps of the V&A, a living picture in honour of music, art and David Bowie. Around this theatrical spectacle, many exhibition goers, Bowie fans, tourists and photographers formed crowds, bringing the Kensington street on which the museum is situated to a standstill.

As a performer, Bowie had all the hallmarks of a true cabaret artist, switched from one colourful character to another throughout his prolific career. David Bowie is had many references to Berliner Kabarett, the musical Cabaret and poet Christopher Isherwood within the exhibition. All of these influenced Bowie greatly, in particular with regards to his character The Thin White Duke. It was an appropriate tribute, therefore, that a group of performers chose a large-scale piece of street cabaret to mark the ending of the exhibition in London.

The event featured improvisational direction by Cut String Theatre Company and amongst the performers were Laurence Bowie of The Bowie Experience, Susanna Fiore of The Ruby Dolls and Jessica Gallucci the event organizer. Sunday’s theatrics may have vanished with the exhibition, but the V&A is keen to make live performance a part of their future landscape. You can often catch live music events there – their free monthly Friday Lates is one example – and there are plans afoot for more theatre performances in those unique surroundings. So look out for it in it’s other guise – as one of London’s exciting new performance spaces.

More information on the Victoria & Albert Museum can be found here.