The Week in Cabaret: Varied Variety 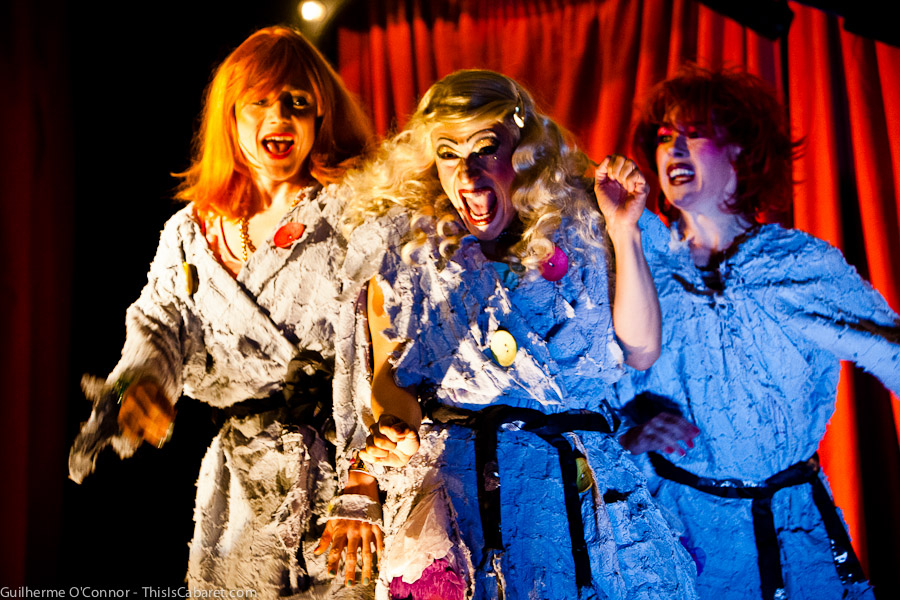 Saturday saw The LipSinkers performing as part of the Revival Festival in new pop-up venue Marylebone Gardens. From Madonna to The Pogues via punk and disco, they brought to life a soundtrack so cool and varied that we can almost smell Quentin Tarantino’s jealousy from here.

The LipSinkers can be seen this Friday at the Royal Vauxhall Tavern.

The tranny crew has an arsenal of performance art at their disposal including dance, burlesque and theatre; Blanche DuBois can hold her head up in any boylesque contest, while their Macbeth-themed take on Meatloaf’s I Would Do Anything For Love was a spot-on pastiche of the original video. Simply put, the LipSinkers are to lip-synching what Usain Bolt is to running for the bus.

Mat Ricardo’s London Varieties continues to do its name justice with one of the most varied line-ups in town. On Thursday, tap dancer Josephine Shaker premiered her new penguin act, followed by the heavy metal magic of Nigel Blackstorm and the musical comedy of Mr. B the Gentleman Rhymer. Veteran stand-up comic Arthur Smith was the guest interviewee of the revue’s talk show segment, entertaining the public with anecdotes from his career and a backwards rendition of Jingle Bells. The sold-out event was the show’s last London date before its imminent transformation into Voodoo Varieties, a daily show with a month-long August run at the Voodoo Rooms in Edinburgh.

After almost three hours of watching Milo Miles’s new production Elysium on Wednesday, one could feel a certain empathy with the treatment forced on Alex in the final chapters of A Clockwork Orange. Housed in Harvey Nichols’ Prism Brasserie, this car-crash cabaret show seemed endless. From the beginning, the sound system faltered or failed completely, which made a shambles of the singing numbers, and the (very few) announcements competed with clinking from the bar.

Magicians Richard Leigh and Oliver Meech cleverly eschewed mikes, but their maths and time travel tricks felt out of place in Miles’ Busby Berkeleyesque dreamscape. A visible lack of MC and stage manager meant that the show flowed like jelly. Miles’ choreography was divine, but its effect lost amidst the interminable conveyor belt of song and dance numbers, which nevertheless included faultless performances by the likes of Jolie Papillion and Bouncy Hunter. Sometimes less really is more.

Brighton-based vaudevillian quartet La Bordello Boheme is rocking the Brickhouse with their eponymous show, in a short season of burlesque and circus. Frontwoman Veronica Blacklace is a vivacious singer who happily shocks diners out of their carb comas, all the better to appreciate the skills of effortlessly cool burlesquer Billie Rae, impressive pole dancing from Edd Muir and the sexy circus skills of Chi Chi Revolver. This is a classic cabaret showcase that amuses as much as it amazes. La Bordello Boheme continues their London season until July 21st.