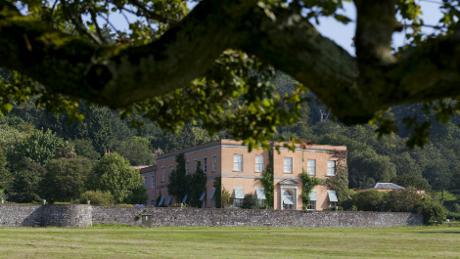 It seems as though every week cabaret is faced with another huge organisation that wants to get involved but in an apparently feckless manner.

This month it is the turn of that venerable institution the National Trust who are jumping on the cabaret bandwagon by announcing that they are putting on a series of burlesque shows in two of their properties to try and raise their visitor numbers.
One of the events is being held at Killerton, an 18th century house set in a 6,400 acre estate in Devon on June 22-23 with the other at Cornwall’s Trelissick Garden the following weekend. The NT claim that they want to create “perception-changing” events this month as part of an attempt to appear less “buttoned-up” and to attract new, younger visitors to its properties.

Killerton House in Devon will be hosting a night of burlesque.

However, changing or challenging any perceptions seem far from the mind of the promoters at the National Trust. They seem determined to make sure the general public are aware that it’s purely “light-hearted entertainment” and that there will only be “tasteful dancing”. The reaction from its traditional customer base has veered between the perplexed and outright hostile. A typical comment comes from one Telegraph commenter who asks “What an abysmal idea, must everything be debased? Why not a betting outlet next to the gift shop? Or a cyber cafe so that people can get their daily fix of porn, uninterrupted by considerations of taste, culture or decency. This country continues to plummet in free fall. No sense of culture or pride in the inheritance lovingly handed down to us to pass on to our children and grandchildren.”

Shelley Barns, from the organisers, said: “It is a family event, so the burlesque dancers will be quite tame. It is supposed to be a bit light-hearted. They won’t be getting completely naked, let’s put it that way. This is the first time they have performed anywhere like this.” The Telegraph, entirely it seems without irony, then goes on to explain that Trelissick Garden in Cornwall is hosting a show by The Slinky Minskys, a group of local burlesque performers. The trio of Babalicious, Miss Pip Tease and Miss Guilty Pleasure, provide dancing tuition for hen parties and describe themselves as “Cornwall’s leading troop of singers, dancers, bump and grinders”. Sigh.

In the past burlesque has had the occasional feminist backlash, which isn’t helped when prominent women like Dr Brooke Magnanti (aka Belle du Jour whose blog and books were adapted for the TV series Secret Diary of a Call Girl) decide to spew out a factually questionable article that not only misses the entire point of burlesque by a West Country mile but manages to throw lap-dancing clubs and burlesque venues into the same category. She writes: “But by and large the phenomenon of striptease, which includes anything from burlesque clubs to lap dancing clubs, is under attack”. She later tweets “Is it too late to brand burlesque ‘hipster stripping’? Because seriously”.@bmagnanti (We have extended an invite to Dr Magnanti to see examples of modern burlesque. We await her response.)

Burlesque is an empowering and creative art form, where women and, get this, men, are involved in creating shows, making costumes, stage managing, running venues, editing music…the list really is endless when it comes to putting on a good show. It’s an artform that accepts and embraces everyone and anyone and it really is a shame that people are unwilling and unable to shift their perceptions of something that even (and especially) prominent feminists have spent the time getting their heads around. In her informative book How To Be a Woman, Caitlin Moran refreshingly explores the differences by visiting both a strip club a burlesque venue: “The difference between a burlesque artist putting on a single show in front of hundreds and a stripper on an eight-hour shift, going one-on-one, is immense…With burlesque, not only does the power balance rest with the person taking their clothes off – as it always should do, in polite society – but it also anchors its heart in freaky, late-night, libertine self-expression: it has a campy, tranny, fetish element to it. It’s not, to use the technical term – an “easy wank”.

The predictable response from the NT’s notoriously reactionary customer base egged on by social media and news sources describing the performers as “strippers” led the Trust to back-pedal furiously: “A National Trust property in southern England is staging a burlesque event as part of an attempt to freshen up its image.” Prospective audiences are told the two-day event at Killerton House near Exeter will involve “dancing… corsets, feathers and pearls.”

The quality of the performers hired by the National Trust is dubious, to say the least. An initial marketing image showed superstar Immodesty Blaize despite her not being booked for either event. We understand that this is one of the dancers who will be at Exeter and these are the troupe that will be seen in Cornwall. The main dancer in the second video seems to think she’s on Heathrow runway waving in planes and, frankly, if Cher is the troop’s (sic) chief burlesque inspiration then something is very wrong.

The National Trust’s Felicity Boucher makes it even worse by telling the BBC: “It’s not about burlesque, it’s about the costume collection…it’s a family evening out.” Oh fabulous, that’s a great way to empower the women and men who enjoy burlesque, act as if it’s something to be ashamed of enjoying. Excellent way to promote the art of burlesque, Felicity. Thanks for your support. She also points out “It’s not a fifties stripshow or anything sleazy”. Because burlesque is really the Art of the Sleaze, non? There’s no skill involved at all, really.

By not respecting burlesque as a traditional and historical artform with an international following, the National Trust have missed a trick. The National Trust could have used these fudged summer events to bring life to their fusty buildings through a high-profile ball featuring burlesque alongside other less controversial entertainment. An excellent example can be found in the Kensington Palace’s Midwinter Ball held last December. Award-winning hula hooping burlesquer Anna The Hulagan performed there alongside an escapologist, a magician and musicians with not a sniff of scandal in the air.

The etymological origins of burlesque lie in the Italian word burlesco which literally translates as “a jest”. This lazy headline-grabbing stunt from the National Trust and their frankly insulting attitude to burlesque will have done nothing for their own standing amongst their followers. Unfortunately for the reputation of the artform’s scene and its performers and reputation, the joke is not just on the NT.