The London Cabaret Festival: Curtainraiser And Fundraiser Rolled Into One 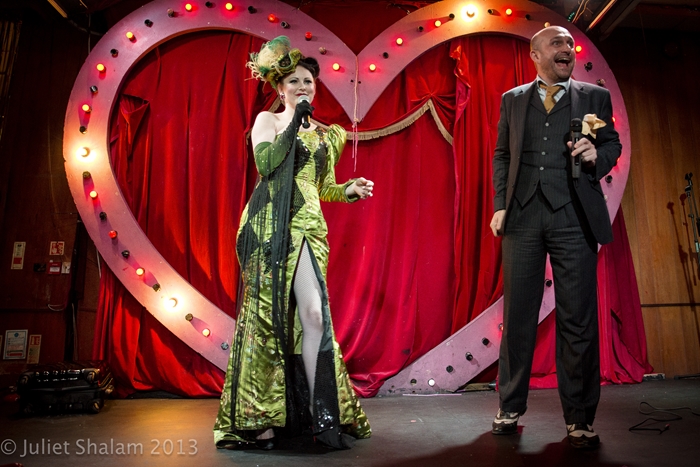 Curtain up on the one and only London Cabaret Festival – diverse, maverick and strictly no pompoms. 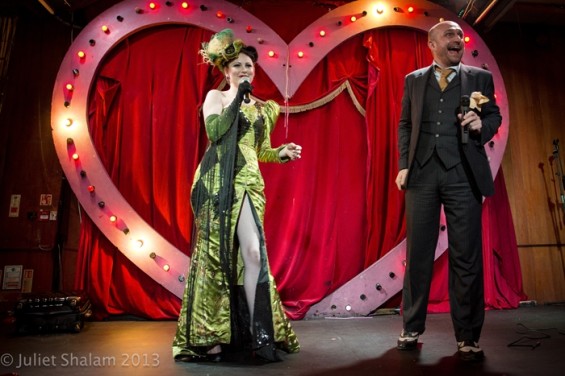 The inaugural London Cabaret Festival set its bar high on Tuesday night when it launched with a fundraiser at the Bethnal Green Working Men’s Club ahead of a month-long carnival of the most diverse and innovative cabaret due to start on 1 October.

For those who missed the hullabaloo, Mr Armstrong, who is soon to be in residence at “the other cabaret festival”, caused controversy with he said in an interview with the London newspaper that “a whole load of old strippers bought themselves pompons and souped-up their sets and are calling themselves burlesque.”

Just as erroneously, Armstrong stated “I’m convinced that cabaret is set to return.” With a perfectly balanced line up of rich and diverse talents you’d struggle to find in any other city, evening’s grassroots celebration proved that, not only had London’s cabaret scene been trailblazing for years, but that it was at the peak of its powers. Moreover, the sheer calibre of the bill spoke volumes for the scene’s famed collaborative nature.

The roll call included deadpan magician Piff the Magic Dragon who dropped by for some card tricks minus his usual canine sidekick Mr Piffles.  Fortunately, drag artiste Miss Cairo filled the gap, ably stepping in as his lovely assistant and spawning the accidental birth of a new double act.

Fellow Edinburgh Fringe veteran Des O’Connor treated us to his song about octogenarian sex, and female absurdist dance troupe Figs In Wigs and their immaculately co-ordinated hand moves, won the prize for off the wall entertainment as they danced to Kool and the Gang’s Ladies Night in white hooded boiler suits with their signature sequinned monobrows.

Giving them a run for their money in the kooky troupe stakes were the maverick Original Street Dancers. Their hybrid routine of street dancing and Morris dancing was like watching Vicky Pollard on May Day, brilliantly executed and full of attack.  With the LipSinkers fresh from their short but well-received Fringe run and a highly original equestrian burlesque act from flame haired Sophia St Villier, there was something for everyone and not a pompom in sight.

The evening had many highlights, but the multi-talented and impressively flexible Abigail Collins proved that she is cabaret’s triple threat, introducing the latest act from her stable of characters, Peggy Sued, a walking incarnation of the famous Psycho shower scene.  Dressed as a shower curtain and impaled with fake knives, Collins was as sharp as a whip and sung a perfect rendition of Fever whilst doing the splits on the shoulders of two audience members. Not an easy feat and one that’s coming to a cabaret venue near you.

The show ended on a high with international sensation, the Boy With Tape On His Face proving with his joyful study of the ridiculous that two oven mitts singing Endless Love to each other will never get old.

The London Cabaret Festival is not the first cabaret festival in the capital; far from it, as this will be the sixth this year alone. What makes this one special is that it has been set up by the community of performers and not by the deeper-pocketed venues like the London Wonderground’s Spiegeltent, Jacksons’ Lane and the assortment behind the songbook-based London Festival of Cabaret. Money raised by this event will go towards funding essential festival expenses, giving the artists involved an autonomy rare for any artform.

And finally, the happy news was revealed on the night that the Frisky and Mannish will be leading another Cabariot song.  Well, it is X Factor season after all.  Get ready for it to go viral.

The London Cabaret Festival Fundraiser took part on 3 September. The Festival itself runs at selected venues across London throughout the month of October.  For more details go to http://www.londoncabaretfestival.com