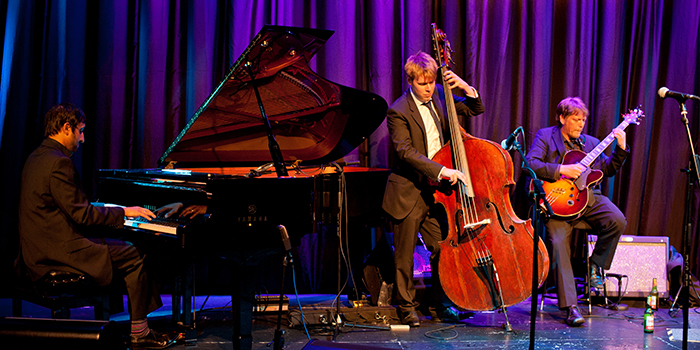 Looking for some midweek dancefloor action? With an orchestra behind him, swing maestro Benoit Viellefon and his orchestra will be at the Hippodrome Casino’s Matcham Room every Tuesday this month.

Looking for some midweek swing action? Check out Benoit Viellefon and his orchestra.

Benoit Viellefon may well have his orchestra, but there’s still something missing from his performance at the Hippodrome casino. At times the ensemble feed us toe-tapping, nostalgia driven hits of delight, but whether it’s the quiet atmosphere (admittedly occasionally broken up by one or two revellers) or the sheer number of jazz and swing numbers on offer, everything is polished, fun, yet never quite fitting together as an exceptional whole.

First to those toe waggling hits though. There’s The Mooche, a Roaring Twenties classic popularised by Duke Ellington, alongside a fantastic trumpet accompaniment for Fats Waller’s Ain’t Misbehavin’, whilst Nat King Cole’s It’s Only A Papermoon is followed by cheeky crowdpleaser Ferme La Bouche  – you couldn’t ask for more in the luxe surroundings of the Hippodrome’s cabaret theatre. It’s obvious from the start that the compact band of musicians are highly skilled and acclaimed players, each solo from the saxophonist to the clarinettist a sheer pleasure to hear and  be entertained with. It’s easy to forget too because everything runs along so smoothly how hard everyone onstage is working, which is of course all part and parcel of the expertise involved.

Benoit himself plays a typically comedic yet charming French gent throughout, leaving little quips for us between songs which his orchestra thankfully counter from time to time, in the casual way a group used to each other will. Occasionally his vocal skills, rough with Gallic twang, feel a little out of place in some of the smoother numbers, but his excellent guitar picking and charismatic verve shine through.

Alongside the swing smashes there’s also some original material performed by Viellefon and the orchestra  – a bold choice to fit alongside the more recognisable tunes. One in particular, Mon Amour, has such an affable French style that on closing one’s eyes it would be quite easy to imagine that one is in fact sitting outside a little Parisian café until late into the last hours of the day, when there’s nothing left but cigarette ash and wine ringed glasses and the faint hums of pleasant song.

Viellefon’s new songs are also a refreshing change from the many respected but occasionally unoriginal picks that make up the rest of set. On the one hand, it’s great to hear Mambo Italiano, as it’s inevitably a crowd raiser, but on the other, it sits uncomfortably amongst some of the other choices; it has been picked it seems purely for its recognisability. As such there sometimes appears to be no rhyme or reason as to whether the group play gypsy swing, Russian folk or 1950s jazz. There’s certainly nothing wrong with a little variety (especially, one hears, in jazz), but it does make the arrangement feel less carefully thought out than it could have been, when really with the talent on display each piece should feel special and inventive.

Perhaps if more people had decided to get up and dance then the combination of songs wouldn’t have mattered so much either way. As it was, only one couple braved the dancefloor – however given their rather irritatingly exceptional moves there might have been a reason why no one else followed suit. Benoit himself seemed mildly miffed at the lack of swinging going on, and who can blame him – his shows at the Hippodrome are meant for those ready to revel rather than relax.  It is, after all, what both man and band do best – providing a largely enjoyable collection of classics to get up and move about to, rather than some deeper reflective thesis on the jazz genre.

Swing Revival returns to the Hippodrome this month on 15, 22 and 29 April. Please check the venue’s website for other dates.