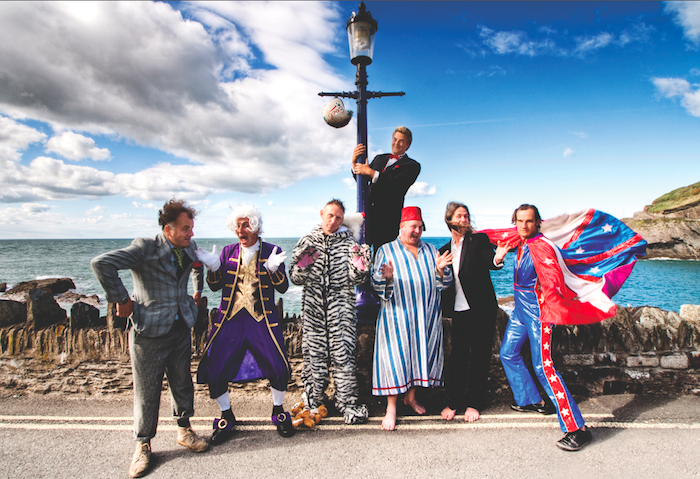 The family-friendly variety supergroup Slightly Fat Features are heading to the Fringe next month. What can we expect from them? 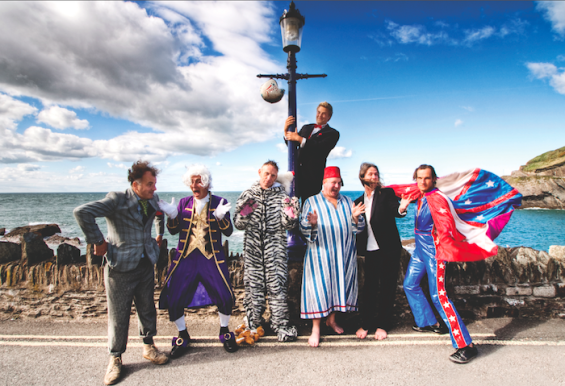 This year Slightly Fat Features heads to the Edinburgh Fringe festival, taking with it a 70-minute self-titled mashup of previous shows Variety and A Fat Lot Of Good. The seven-piece ensemble, who have been touring together since 2010, have a long history of friendship spanning back, in some cases 15 years.

With tours across the UK and Europe, the all male variety troupe have had sell out runs at The Roundhouse, The Pleasance, Blackpool Showzam Festival and Warwick Arts Centre. 2010 saw the group come together to create Variety by the Sea, with A Fat Lot Of Good coming in late 2011. The combination of the two for the Fringe will be a chance to combine the best of both for one knockout variety spectacular.

Slightly Fat Features create shows with variety, suitable for audiences of all ages. Expect live music, magic, circus sings and dance, and lots of comedy and laughter. Their aim is to bring variety back into the venues and theatres of the UK and all around the world, including vital elements of street performance such as crowd participation and directly making the audience a part of the show. The Fringe should give these guys the perfect opportunity to get up close and personal with their audience and spread the Slightly Fat word.

Goronwy Thom spoke to This Is Cabaret about the troupe’s shows, it’s creative process and their plans after the big Fringe experience.

What makes Slightly Fat Features different from other variety shows?

Crucially we are one of the only ones making shows for everyone, if perhaps not the only one. We hope to take variety back to the major theatres of the UK and into the West End and we believe this means playing shows suitable for everybody. There are brilliant cabaret shows for adults and brilliant ones for kids but not for both. It doesn’t mean we are prudes or anything and you only need to see our show to realise we don’t have to be a kid’s show to entertain children.

Also, we are different because of the constant group of performers. We are all individual performers who still work across the world and all have our own acts. We play individually in cabarets all the time but, since forming Slightly Fat Features in 2010, our group mentality and group routines have made our cabaret/variety show more an ensemble piece and less cabaret. Furthermore, because we know each other so well and have done so for years before Slightly Fat Features even started, we have a relationship both on and off stage which is so close that interesting combinations come up when playing live together. Our knowledge of each other allows us to play with routines during the show, keeping everyone on their toes and everything fresh.

How do you find building shows that appeal to every age group?

We don’t particularly make pieces for everyone, we just make ones that we think are funny or entertaining. We then look at the content and tweak things if we believe there is a need. We think if it is funny, it is funny and whether you are 4 or 84 some things will always be funny. We also react live to the audience we play for: if there are lots of laughs around certain parts to the show, we try and add to them. Sometimes we think of a gag or a piece which is just on the borderline of appropriateness and this can lead to disagreements as to what is or isn’t suitable. But we tend to agree on most content.

As a troupe, how do you approach the creative process?

We often individually or in pairs form a very basic idea and present it to the group. That goes on to become a bigger fuller idea with everyone’s input and the next stage is to put it in front of a crowd if possible. We have always used the stage and the live performance as a major tool to our creativity. Sometimes the most basic of idea will be put on stage to see if it is funny or good in other ways.

We have regularly used guest acts in shows to create a good level of cabaret without us even in it and then have added on top lots of new routines and ideas. Hopefully the acts who guest are the meat and we are the sandwich and the combination makes a decent meal for the audience! This gives us the chance to put routines in front of audiences and then refine them to create a finished piece. Since last October, we have had additional direction from Petra Massey, and that hugely talented directive eye has helped us enormously.

Once the Fringe festival is done, what’s in store for you all?

We will no doubt need some sleep and holiday after the end of the Fringe , but soon after we will all play some individual gigs and then move on with creating a tour for 2014 and acting on any opportunities the company may have received. We are hopeful that Edinburgh will create some exciting opportunities and we can boost the profile of the company. I personally will probably do a lot of admin.