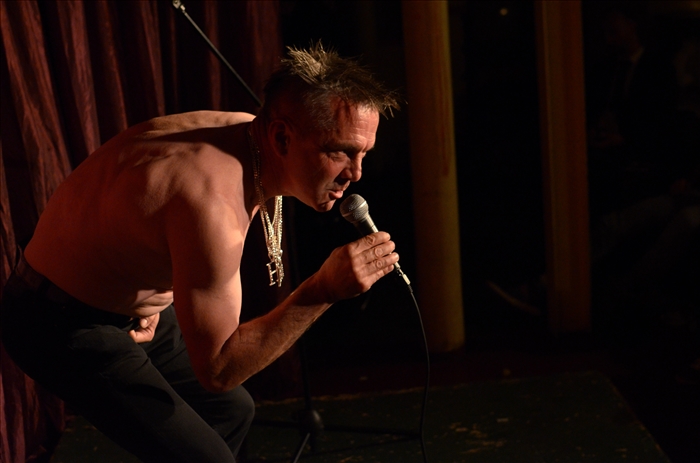 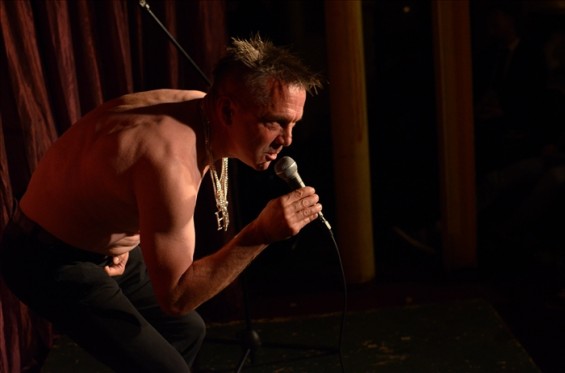 The Hanging Gardener of Babylon: one of the acts

Errol McGlashan ended up holding more than the audience’s attention.

The Hanging Gardener of Babylon: one of the acts

Amy Neilson Smith opens the show with a collection of short poems that are entertaining and humorous. She holds the audience in a constant giggle with her expressive voice and naughty words. Shaun Levin brings the tone down to a melancholic contemplation as he recites an excerpt from his book Seven Sweet Things. Although his story contains erotic imagery, it is more of a sad anecdote and he is visibly emotional when he completes his set. Later in the evening Van Roberts, who has made time for Velvet Tongue on her travels from Australia, centred her set around the theme of a sexual dry spell, and the resulting fantasy of every day innuendo. Her work draws guilty and knowing chuckles from the audience as she touches on thoughts we all secretly have. These three performers bring their own sparkle to the event and, in retrospect, save what is to become a disappointing lineup. The early promise, unfortunately, gives way to a litter of substandard performances.

Season Butler presents a piece of performance art, dressed in a huge blonde wig and smeared in white face paint. She recites repetitive lines of text, whilst intermittently popping inflated condoms or batting them into the audience depending on whether she completes sections without mistakes. Her act drags and gets old extremely quickly. The open mic segment of the evening doesn’t provide any better fare. One or two speakers have potential but most just merge together into a long list of forgettable faces. Even the addition of a boylesque act brings no real wow with the performer displaying clear signs of stage fright. Although the content of almost every act’s dialogue was related to sex or fantasy, not everyone seems to understand the idea of erotic literature. Shaun Levun and Van Roberts are great examples of people who are getting it right.

The Hanging Gardener Of Babylon, who seems to be having a not-so-secret love affair with his nipples, simply shouts at the audience and rapidly becomes insufferable. He misses the point of the evening, as a barrage of sound bombards the audience, which lacks any sense of sensuality. Butler and Babylon stand out for completely the wrong reasons and bring nothing to the evening.

Ernesto Sarezale hosts with a nervous enthusiasm, even offering a poem of his own. His sweet-natured hosting style makes the evening a little more bearable. The sheer length of the show brings down the overall impact: after three long hours, people began leaving at an ever increasing rate and the initially packed venue thinned considerably. The interval following the main acts is a welcome break, but the second half drags on and on with no end in sight. What purports to be an erudite and erotic night suffers, on this occasion at least, under the weight of some of the underwhelming acts.