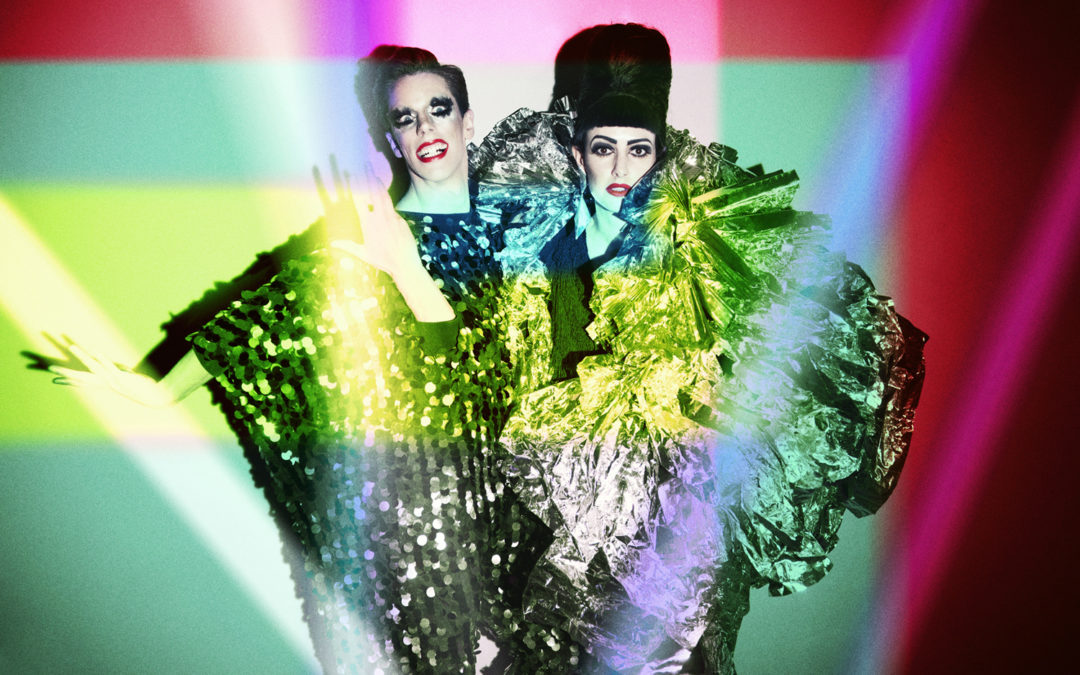 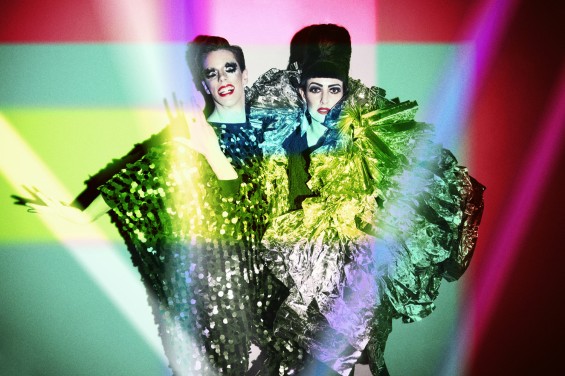 Bourgeois & Maurice have had a successful seven years as one of the cabaret scene’s most well-regarded acts.  What better way to celebrate their longevity than having a birthday party in London Wonderground’s Spiegeltent?

Having steeped in the queue for seats – when will the Wonderground change their awful seating policy? – I took my place in a venue alive with anticipation and excitement. The show opens with a funny video montage and a very special birthday tribute from Justin Bieber. As a former Belieber myself, I am impressed. Bourgeois & Maurice burst onto stage dressed up to their usual quirky standards with added sequined party hats.

Georgeois Bourgeois and Maurice Maurice are not your usual sibling act. Georgeois commands the vocals while strutting in outfits of lycra, sequins and other fabrics not found in nature. His petit frame, circus make-up and ability to contort his mouth into the most gynaecologic of expressions give him an eccentric allure.  From appearances alone, Maurice could easily be the wayward daughter of Kristin Scott Thomas.  Her enormous beehive barnet towers over her impassive face as she lets slip the occasional wry quip.

This show, they tell us, is a showcase of their early work, some current work and some never before played songs.  Certainly we get some older pieces – Don’t Go To Art School, Dull People – and some fresher material from latest album Third like Social Networks (Make Me Feel Shit Sometimes) and Apocalypso. Where is the new material we were promised?  All the while the video wall behind them plays the accompanying music video which, for Satanic Organic in particular, adds an extra layer of humour. Their songs are well-written and although they often have similar structures, are never dull.  The lyrics are witty and, importantly, have an uncomfortable truth at the heart of them. Bourgeois & Maurice are one of the few acts who sound better live than recorded.

Johnny Woo joins the pair for an on-stage collaboration.  I admire Woo for helping push alternative drag into the mainstream but his outfit tonight looks like someone put Barry Manilow, Sharon Rickman and a lawnmower through a blender. The chemistry is there in spirit but missing in substance and the collaboration falls short of the rest of the show.

Maurice delivers some hilarious feminist theatre from the general direction of her vagina before the pair strip down to entirely sequined outfits.  They have previously said that only when you can feel the sequins in your oesophagus have you gone too far – even I was starting to feel a scratch at the back of my throat with these outfits.  Bourgeois gyrates, undulates, pulsates around the stage causing, I’m sure, more than just me to get hot under the collar. They close with their classic Ritalin with Bourgeois in a polkadot gimp suit.

The show is highly entertaining and certainly showcases their talents but after the first ten minutes the birthday idea falls by the wayside.  Here was a missed opportunity to exploit a theme and create a truly unique show.  Instead it was a highly enjoyable, craftily constructed show just like any other Bourgeois & Maurice production.  Now, how do I get Bourgeois’ number…?