See What The Boys In The Backroom Will Sing: The West End Men, Vaudeville Theatre 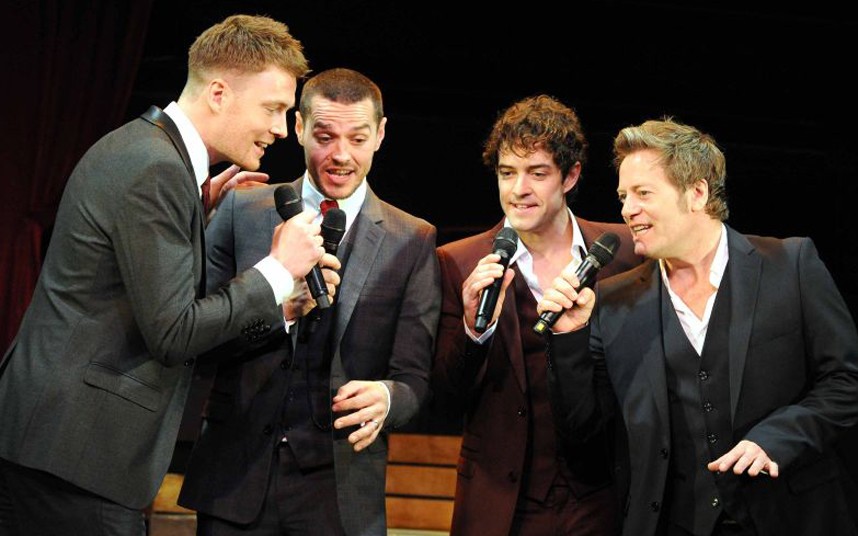 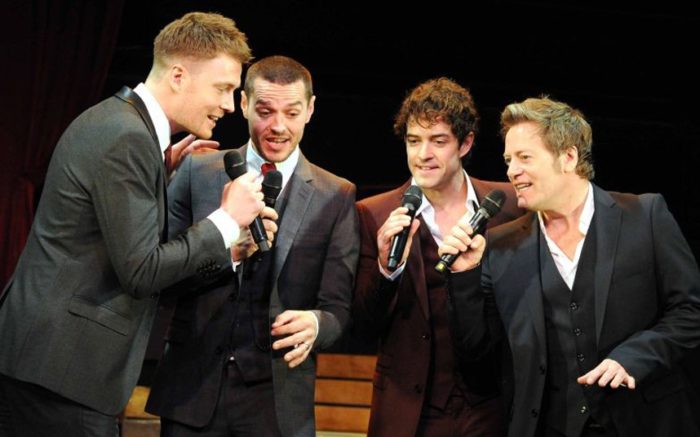 This needn’t detain us long.  Four guys, not named Moe, not named anything you’ll remember from recent West End appearances as a matter of fact, have been scraped together to croon a battery of show tunes while pretending to be more rock band than romantic lead.

The kindest thing to say about it is it’s occasionally more musically accomplished and less self-indulgent than you might think from the posters.  But not much.

Clearly someone in a production company thought – ‘who shall we get for this?  Who’s not working?’

The lineup may vary but on opening they had salvaged: the curly crooner from the Portsmouth-Bilbao ferry who won a 2007 TV competition to be Joseph in that musical Andrew Lloyd Webber scored so simply schoolchildren could sing it, someone from a disbanded boyband uncertain where his career’s headed now his balls have dropped and he’s been in the Celebrity jungle, a capable ginger Welshman who may have served time in Phantom and Les Mis but escaped any actual stardom in the process, and a slightly older guy with a Matt Monroe haircut who’s trying too hard …

What they’re required to do is throw macho bromantic glances at each other across an unpainted plywood set seemingly assembled from offcuts skip-dived behind B&Q, act all jazzy and cool and pretend to be groovin’ to the sick beats which is about as convincing as Elaine Paige doing scat.  Just as Ms Paige is musically accomplished but not in the same vein as Dame Cleo Laine, these boys are not rock gods and no amount of lip-biting air guitar is going to turn Lee Mead into Led Zep.

This stale formula has been hauled round the provinces and even to Singapore and back, so it’s unclear why there were so many cracked notes and dodgy entries.  The genuinely charming Mead was visibly struggling with a throat problem, and surprisingly for faux-groovers no-one had a bottle of anything on stage, not even water, so he croaked a fair bit.

The first half seems equally underlit and undersung, with moody predictable solos and shared-out mash-ups from Phantom, Aspects and the musical equivalent of rising damp, Love Never Dies.  Forty-seven key changes later, the chaps parade in suits crafted by a menswear sponsor who won’t be selling many on the strength of their catwalk modelling.

It all ratchets up a gear after the interval, despite the fact the quartet are now dressed for a Hoxton barbecue in low-rise jeans and pec-squeezing shirts, mainly because the excellent 5-piece band led by terrific pianist Will Stuart is given its head and the singers also rise to the occasion if not always quite to the tune.  Still plenty of irritations, though, particularly from Matt Willis (from Busted) whose crotch-thrusting and tattooed forearm jiving are so not going to serve him well in musical theatre when it’s his turn for Baron von Trapp.

As though aware they cannot carry the evening unaided, the boys are abetted by Kerry Ellis, late of Wicked, who shotblasts the plasterwork on the front of the balcony with a scarifyingly powerful Defying Gravity.  After this, the production has nowhere to go as the leads are joined onstage by a motley choir and, rather like some provincial Choral Society riven with internecine feuding and unable to agree whether One Day More or Bohemian Rhapsody should be its climactic finale, does both.